A Return to Hindutva

For Savarkar, it was religious pluralism sustained by cultural nationalism 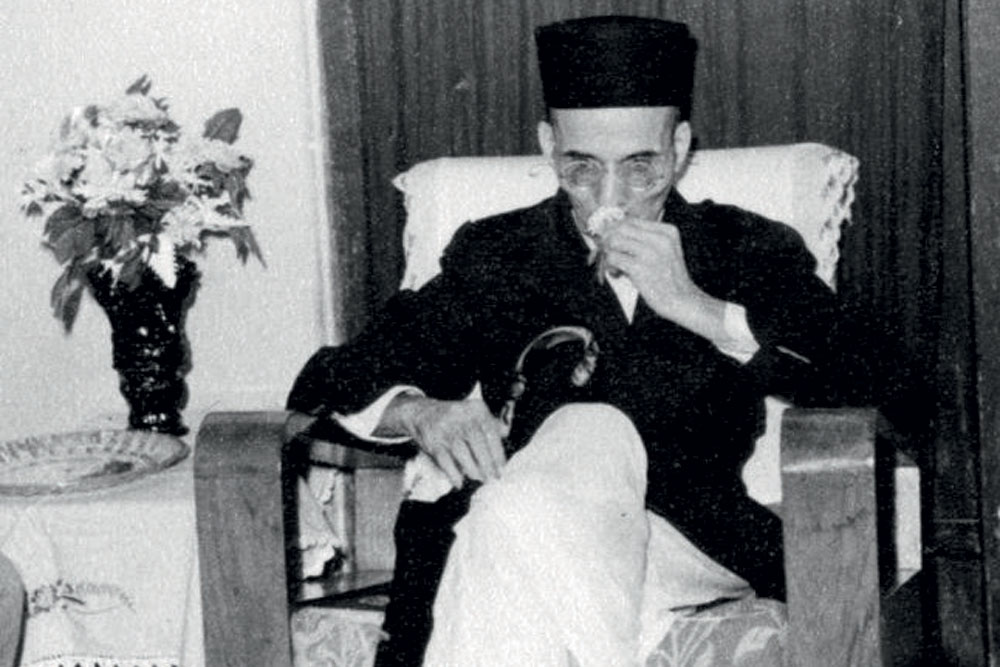 
A FEW DAYS AGO, on July 26th, the second volume of Vikram Sampath’s biography of VD Savarkar (1883-1966) titled Savarkar: A Contested Legacy (1924-1966) saw the light of day. The first volume was called Savarkar: Echoes from a Forgotten Past (1883-1924). Earlier accounts of Savarkar’s life have been rather sketchy and partial; Sampath revisits his life in meticulous detail and in a balanced manner.

The one concept associated with the name of Savarkar, above all others, is that of Hindutva. So perhaps the time has now come to revisit it as well.

This need to revisit Hindutva also arises from the fact that Hindutva has been associated with the ‘semiticisation’ of Hinduism, namely, the alleged attempt by the Sangh Parivar to cast Hinduism in the mould of a Semitic religion such as Christianity and Islam, that is, into an exclusivist religion with its own creed, holy book, and distinct community. Does the concept of Hindutva, as developed by Savarkar support such an interpretation, or has such an interpretation been imposed on his term Hindutva? One is not doubting the fact that Hinduism has become a political force in recent times; what one wishes to examine is whether these developments can be credibly associated with the concept of Hindutva, which has not only been associated with such ‘semiticisation’ but is also viewed as abetting fundamentalism and fascism.

The term Hindutva was put into play by Savarkar through a slender tract written by him in jail in 1923, which is now considered foundational for all future thinking about Hindu identity, despite its slim size. In order to understand the significance of this tract one only needs to consider its title in full, namely, Hindutva: Or Who Is a Hindu? Clearly then, the book has to do with the issue of Hindu identity, which it tries to define in a particular way. But the clarifying question to ask at this point is: What factors necessitated the interrogation of Hindu identity at the time the book was written?

The year 1905 is considered a watershed in modern Indian history because it marked the beginning of that ferment which ultimately led to the liquidation of British Raj over India in 1947. It is quite significant that the train of thought, which culminated in the book Hindutva, was set in motion during Savarkar’s stay in England from 1906 to 1910 when the controversy regarding “communal representation assumed an acutely political aspect.” The collapse of the Khilafat and non-cooperation movements, as led by Mahatma Gandhi in 1922, also played a major role in this context. It could be argued that this book Hindutva, and the concept it embodies, participates in this ferment. This ferment can ultimately be traced to the British use of the word ‘religion’ to denote mutually exclusive entities to chart the ‘religious’ reality of India in the decennial censuses, beginning with 1891. The British used the world religion in the sense of ‘exclusive’ adherence to one religion, which was the regnant European notion, and they proceeded to impose it on India. Such imposition meant that people were forced into the narrow corridor of one religion, even if they felt at home with more than one religion. The Census, in this way, began to shape the religious reality of India instead of reflecting it. And the results of such Census-based engineering now became evident in the life of the people, who increasingly began to identify themselves as followers of one religion. This did not pose a special problem for Christianity or Islam which are committed to the one person-one religion equation as it is, but it did for Hinduism, which is a conglomerate of many faiths. Four religions of Indian origin had by now been identified as distinct religions as part of the Census operations: Hinduism, Buddhism, Jainism and Sikhism, in place of a single Indic religious tradition.


Savarkar’s book could be viewed as a response to the anxiety generated by the western definitional intrusion into the life of the Hindus, for it was compelling the religions of Indian origin to compromise a deeply engrained feature, that of multiple religious participation

The Census operations had been in progress since 1891 but what brought the issue to a fore was political representation on the basis of religious identity, introduced by the British in the concessions of self-government made to the Indians from 1909 onwards. From the Hindu point of view, the fragmentation of the Hindu religious tradition was at stake, a tradition within which multiple rather than exclusive religious participation was the norm. Now this indigenous religious tradition of India was being broken up into four separate religious traditions of Hinduism, Buddhism, Jainism and Sikhism under the influence of the Western notion of ‘religion’, which had now been institutionalised in India as involving adherence to only one religion. It is true that the notion of exclusive adherence as the hallmark of a religion had already been introduced in India by the Muslim rulers, but the Muslim rulers did not proceed to impose that definition on the non-Muslims in India. The British, however, proceeded to do so.

Savarkar’s book could thus be viewed as a response to the anxiety generated by the Western definitional intrusion into the life of the Hindus, for it was compelling the religions of Indian origin to compromise a deeply engrained feature, that of multiple religious participation. Savarkar’s answer was to fight the problem created for him by one Western concept by drawing upon another element in the Western worldview, namely, the distinction between religion and culture. The pan-Indic tradition did not discriminate among the various religions of Indian origin as ‘dharma’, nor did it discriminate between religion and culture. When, however, Savarkar feared that the pan-Indic tradition was being fragmented by the forced insistence on exclusive religious adherence by the British, he proceeded to argue that while the various religions of Indian origin may now be treated as distinct religions, yet they all shared the same culture, which could now be described as constituting Hinduness or Hindutva.

What was being lost through the exclusivistic use of the word Hinduism was now being salvaged through a new word: Hindutva. In other words, the doctrine of Hindutva combines religious pluralism with cultural nationalism, for now several religions could inhabit the same nation peacefully, bound together by allegiance to a common culture. From this perspective the alleged ethnic nationalism of Hinduism is not an imitation of Western nationalism as some seem to suggest, but an indigenous reaction to the divisive impact of Western imperialism. It used the Western conceptual distinction between religion and culture in the Indian context to overcome the potentially fragmenting effect of the introduction of the Western concept of religion in the context of India, and particularly in the context of religions of Indian origin.

THAT HINDUTVA STANDS for cultural nationalism rather than religious fundamentalism may be deduced from three other considerations. The first is that Savarkar subscribed to the view that the Aryans entered India from outside and were not indigenous to the country. But once here, they started looking upon this country as their ‘holy land’, as the land they loved and were devoted to. Thus any immigrant group which was willing to do so could qualify as Hindu. Any religious group could absorb Hindu culture and become culturally Hindu, while remaining religiously distinct, even if this group originally entered India from outside or followed a religion of non-Indian origin, as illustrated by Annie Besant and Sister Nivedita.

The second is that the thought of Savarkar relies on culture rather than the state for integrating the different religions in a polity and society. Actually, the concept of the state (as distinguished from that of the nation) remains a relatively underdeveloped item on the agenda of the Hindu Right. Finally, Savarkar was himself not ‘religious’, in the sense that he was a non-theist in personal life, who did not even perform Śrāddha on the death of his wife. Just as many Jews follow Jewish culture without necessarily being religious, it was possible for Hindus to be Hindus by culture without having to be so by religion!

The proper modern analogy for Hindutva, therefore, is not religious fundamentalism, as is readily assumed, but rather the view that a country possesses a certain ethos and that just as Anglo-Protestant culture constitutes the ethos of the US, Hindutva may be said to constitute the ethos of India.

Any religious group could absorb Hindu culture and become culturally Hindu, while remaining religiously distinct. Savarkar’s Hindutva was a response to the exclusive religious identity-formation, now associated with fundamentalism, which was being promoted by the British

It is clear then that it is misleading to associate Hindutva with: One, ‘semiticisation’ of Hinduism; two, fundamentalism; or three, fascism. The first equation is not possible because Hindutva turns out to be a response to the British attempt to ‘semiticise’ Indian religious reality by insisting that one could adhere to only one religion. Similarly, it is misleading to associate it with fundamentalism for the same reason, for fundamentalism is based on an exclusive religious identity, while the concept was evolved to counter such incipient exclusiveness. Nor can Hindutva be equated with fascism, for it relies on culture (and not the state) to deal with the issue of religious diversity.

If Hindutva is not to be equated with either the ‘semiticisation’ of Hinduism, or fundamentalism or fascism, then what kind of socio-political agenda may be derived from it, especially as these various phenomena discussed here, it is claimed, are derivatives of it?

If Hindutva stands for religious pluralism sustained by cultural nationalism, then a kind of universalism, of which the world has so far no inkling, would naturally follow from it. The association of Hindutva in Savarkar with religious pluralism and universalism could give rise to a policy which promotes the study of the world’s religions in the curricula of the nation, which was already proposed by Maulana Azad in 1948. Such a concept of Hindutva could also possess a very specific consequence for how our Census is conducted. Respondents could be allowed to indicate dual or multiple religious affiliations in the census of religion in cases where it was warranted, a practice already followed in Japan. Similarly, the question whether proselytisation is consistent with authentic religious freedom will have to be re-examined. The need for a common civil code would be highlighted as an expression of that cultural nationalism which sustains religious pluralism. And so on. These are the likely channels in which the discourse will flow if Hindutva is understood as conceived by Savarkar and not confused with ‘semiticisation’, fundamentalism or fascism.