The Body Politics of Taste

What our ancestors ate continues to influence our palate 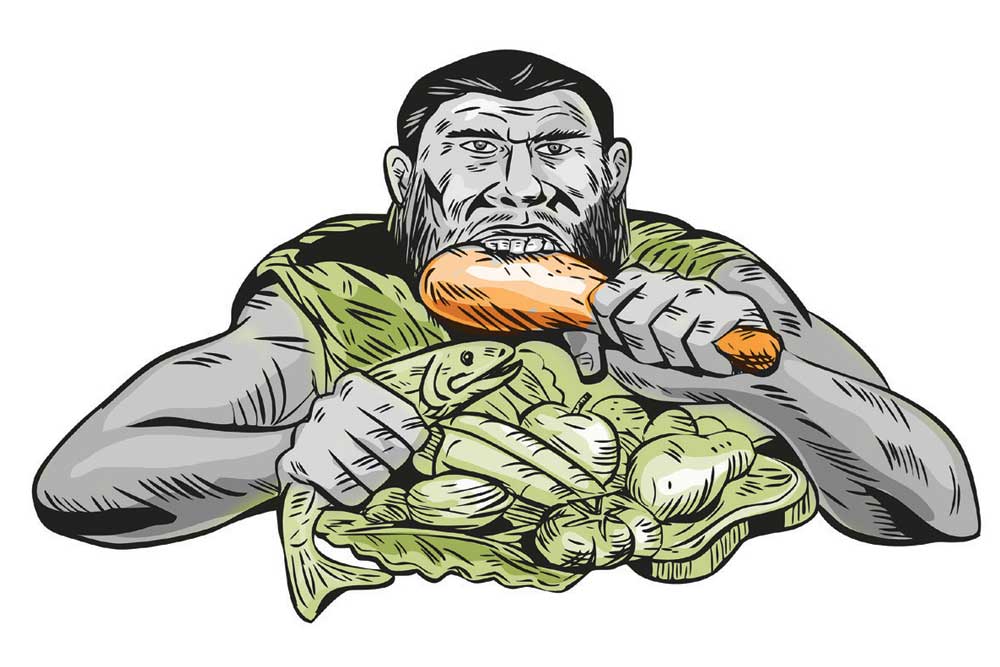 FOR ME, A meal has to be hot. Over two decades ago, when I entered the buttery of my college in England, my choice as a vegetarian was non-existent. Limited to one item: salad. The hot items were lamb or veal or chicken. After day 10, I switched to meat. Well, I asked for the gravy and ate it with potatoes—thankfully, a staple in an English diet. Little did I know that I was following the intuitions of the ancients, who, despite having no scientific tools, were on to a good thing.

Raw food was a no-no in ancient and medieval times. This was because, as Stephen Le writes in 100 million Years of Food: What our Ancestors Ate and Why It Matters Today, between 40 million and 16 million years ago, our ancestors lost the gene that manufactures uricase, the enzyme that helps dispose uric acid, a by-product of a diet rich in purines (organic compounds found in seafood and beer) and fructose (sugar in fruits). Uric acid deposits crystals in the joints, leading to gout. It is still unclear, says Le, why evolution made us shed the ability to deal with uric acid. To cope with this inability, people in traditional societies ate a main meal that was cooked, either roasted on a spit or boiled. Fruits were consumed only in moderate quantities that their bodies could absorb—no fruit diets for them.

Some scientists say that consuming cooked food was instrumental in increasing the size of the human brain. A study published in The British Journal of Nutrition in 2015 found that a group of 198 subjects who followed a strict raw food diet had normal levels of vitamin A and relatively high levels of beta- carotene (an antioxidant found in dark green and yellow fruits and vegetables), but low levels of the antioxidant lycopene. Lycopene is a red pigment found predominantly in tomatoes and other rosy fruits such as watermelon, pink guava, red bell pepper and papaya. Several studies conducted in recent years (at Harvard Medical School, among others) have linked high intake of lycopene with a lower risk of cancer and heart attacks. Cooking, it seems, actually boosts the amount of lycopene in tomatoes. Boiled (best bet) or steamed carrots, spinach, mushrooms, asparagus, cabbage, peppers, among others supply more antioxidants, such as carotenoids and ferulic acid, to the body than they do when raw. Cooking carrots increases their level of beta-carotene, which the body converts to Vitamin A. So forget those Bugs Bunny cartoons with the rabbit chomping down raw carrots. The RSPCA has issued a warning not to feed carrots to pet rabbits because it decays the bunnies’ teeth, besides causing digestive tract problems.

The downside of cooking veggies, says Food Science Professor Rui Hai Liu, is that it can reduce the vitamin C in them. He found that vitamin C levels declined by 10 per cent in tomatoes cooked for two minutes, and 29 per cent in tomatoes cooked for half an hour at 88 ≤ Celsius. But since more vegetables and fruits such as broccoli, orange, cauliflower, kale, etcetera, carry vitamin C than lycopene, we are better off eating cooked vegetables.

So why the rush to salads and raw-food diets? Do they not know about this research? A Stone Age diet ‘is the one and only diet that ideally fits our genetic makeup,’ writes Loren Cordain, an evolutionary nutritionist at Colorado State University, in The Paleo Diet: Lose Weight and Get Healthy by Eating the Foods You Were Designed to Eat. Humans, tapeworms and meat eating went together as far back as 1.7 million to 780,000 years ago. After studying the diets of living hunter-gatherers and concluding that 73 per cent of these societies derived more than half their calories from meat, Cordain came up with a Paleo prescription: Eat plenty of lean meat and fish but not dairy products, beans, or cereal grains—foods introduced into our diet after the invention of cooking and agriculture. Cordain’s motto: If we stick to the foods our hunter-gatherer ancestors once ate, we can avoid the diseases of civilisation, such as heart disease, high blood pressure, diabetes, cancer and even acne.

While the jury is still out on whether it was cooked food or raw meat that allowed our ancestors to move out of the ape phase, what is less contested is the fact that our bodies are conditioned to absorb only what they ate

Sounds appealing, no? Some vegetables such as broccoli are more nutritious when consumed raw, but in general, as we saw earlier, cooked food delivers more nutrients to our bodies and brain. What about meat? Is it true that we all evolved to eat a meat-centric diet especially when there is nothing intrinsically nutritious about meat (or fat and oil too)? After all, giraffes and elephants are vegetarians and they don’t seem to have experienced much trouble with height or weight or intelligence. But this myth about our first ancestors in the African savanna, popularised by Raymond Dart, who in 1924 discovered the first fossil of a human ancestor in Africa, is not going away anytime soon. Dart’s description of these creatures makes for a vivid image that is hard to shake off. ‘Carnivorous creatures, that seized living quarries by violence, battered them to death… slaking their ravenous thirst with the hot blood of victims and greedily devouring livid writhing flesh.’

An article in National Geographic entitled ‘Evolution of Diet’ highlights the fierce debate on the importance of meat to the development of the human brain. Some paleo-anthropologists like Leslie Aiello and Peter Wheeler argue that eating meat was crucial to the evolution of a larger brain for our ancestor, Homo erectus, living two million years ago. The calorie-dense meat and marrow instead of the low-quality plant diet of the apes produced more energy to be used by the brain. The brain requires 20 per cent of a human’s energy when resting; by comparison, an ape’s brain requires only 8 per cent. But there are several problems with this hypothesis. First, more meat-eating does not necessarily make for a bigger brain. Elephants are highly intelligent, as are sharks (those of us who have watched Jaws and Deep Blue Sea can vouch for that). Second, it is not clear how early man managed to obtain meat: was she a scavenger or a hunter? It boggles the mind to visualise man as a hunter keeping pace with an antelope and bringing it down with sticks and stones.

The counter proposal by other palaeontologists is that man was a scavenger, a sort of a hyena, filching meat from other hunter-predators. How then, asks Stephen Le, was early man able to double brain size on a diet of grass and tubers flavoured with marrow and brain bouillon. No mammal lives entirely on scavenging, not even the hyena which gets most of its protein from hunting. He proposes that the best hypotheses is that Homo erectus had long legs, an upright posture, an achilles tendon to absorb and release spring energy, larger buttock muscles to augment running power, and perhaps hunted in packs to capture small antelopes over long distances. But this hypothesis does not explain meat-eating in bush or forest land. The real paleolethic diet was a burst of meat followed by a lean period, when man and woman foraged plants such as tubers, mongongo nuts, plantains, etcetera. Paleo-biologists have found starch granules from plants on fossil teeth and stone tools, which suggests humans may have been eating grains, as well as tubers, for at least 100,000 years—long enough to have evolved the ability to tolerate them.

The alternative theory is proposed by primatologist Richard Wrangham, who argues that the mastery of fire and cooking could have enabled our ancestors to obtain more calories from raw meat and starches. There is, however, no solid evidence of use of fire two million years ago. Good evidence of the earliest use of fire in Europe dates to only about 300,000 to 400,000 years ago.

While the jury is still out on whether it was cooked food (vegetables and meat) or raw meat that allowed our ancestors to move out of the ape phase, what is less contested is the fact that our bodies are conditioned to absorb only what our ancestors ate. As the National Geographic article points out, there is a twist to ‘you are what you eat’. More accurately, you are what your ancestors ate. Just like the variation in our colour, race and genes, our propensity to thrive on some foods rather than others depends on genetic inheritance.

If we are indeed what our ancestors ate, then does this mean that those of us who were born into vegetarian households and have switched to eating meat, and have desk jobs, better avoid meat? And others who want to consume a paleo diet would also have to adopt the paleo lifestyle—stalking game, failing, having to subsist on a few bugs and grass, and after several days of failure, eureka, fall an antelope and gorge on the meat?

Again, the answers from studies are confusing. Recently a Cornell University study that compared vegetarians in Pune to meat-eaters in Kansas found that these vegetarians were more likely to carry DNA that made them susceptible to cancer. Why? Because a mutation had occurred in the bodies of their ancestors to make it easier for them to absorb fatty acids from plants, but the same mutation also produced more arachidonic acid linked to cancer. By the same logic, meat-eaters who have turned vegetarian may also risk having other ailments.

As Stephen Le says, if we add dairy to dairy-less cuisines, or remove dairy from dairy-dependent cuisine, then we risk running into nutrient imbalances because creating a tasty balanced diet from scratch is a lot tougher than eating something that was tested over hundreds of generations.