A Coffee Break in Tradition

A retro coffee house in Chennai as a cultural statement 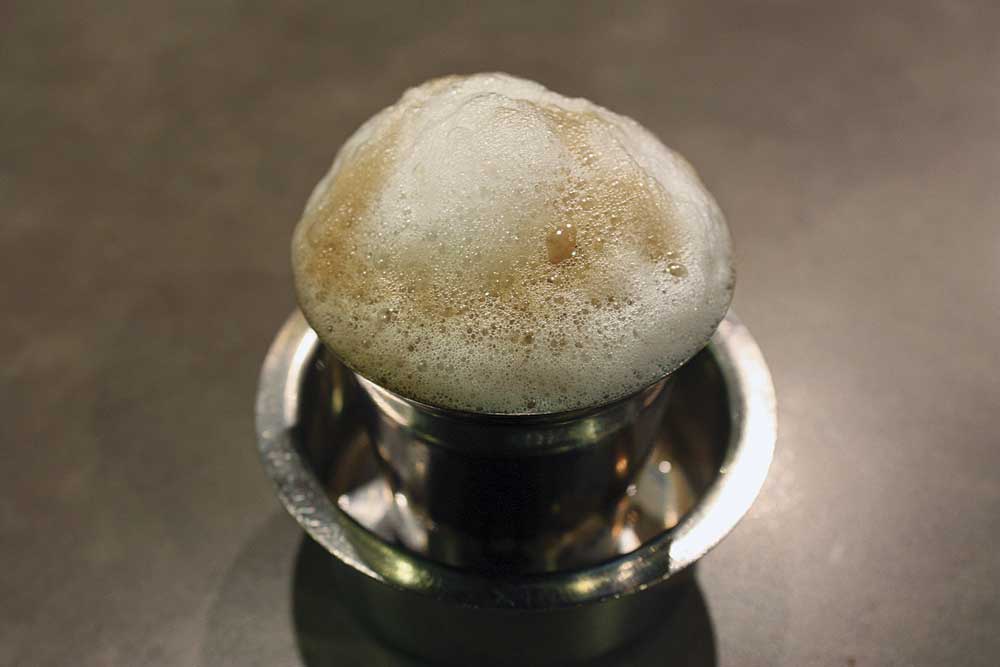 I WAKE UP every morning and absolutely have to smell the coffee! In the upper compartment of the Bialetti stovetop coffee maker, I put one heaped tablespoon of Devan’s coffee (a blend of Malabar monsoon and organic coffee) or Coorg coffee from a small plantation (if I am lucky to find someone willing to bring it for me from Bengaluru). It simmers on the cooking range and within five minutes, the whooshing sound of the decoction indicates that the coffee is ready. I pour it into a large mug, add a dash of boiled milk, and a teaspoon of soft dark brown sugar to offset the bitterness.

This ritual, I assumed, was ingrained in my genes. That I was replicating an age-old tradition in Tamilian households. Well, complete hogwash. Though coffee was grown in Mysore in the 18th century, it turns out, coffee drinking by locals is of recent vintage in Madras. ‘The habit of coffee drinking, I believe, entered our household only a few years before my birth [in 1915]… Probably, it was only after 1918 that coffee drinking became a tradition with my father.’ This is N Subramanian, a historian and author, quoted by Venkatachalapathy in ‘In those days there was no coffee.’

How does something like coffee become a tradition? In 1983, British historians Eric Hobsbawm and Terence Ranger edited a volume entitled The Invention of Tradition where the contributors explored examples of invented traditions in Scotland (did you know that the highlanders did not form a distinct people before the late 17th century?), and the pageantry of the monarchy in Great Britain and Victorian India, among others. Tradition, as Hobsbawm and Ranger point out, is unlike custom, which has to be flexible. Tradition imposes invariance— the bugles that signal the end of Beating the Retreat on Republic Day cannot be replaced by drums. And unlike convention, which displays a habit or routine, tradition has a significant ritual or symbolic function.

Drinking decoction coffee in South India fits the frame of tradition, rather than convention. Venkatachalapathy argues that coffee drinking became entrenched among the middle class and Brahmins in late colonial Tamil society as a way of creating a barrier with lower classes and castes. He says that earlier, everyone in the south drank neeragaram—made by adding water and salt to fermenting water drained after cooking rice. When coffee emerged in the late 19th century, there was much opposition from puritans in the middle-class intelligentsia who tended to be Brahmins. “Filter coffee is more addictive than even beer and arrack,” said one conservative. “In the last few years, some obnoxious stuff has emerged as eatables: coffee, tea, cocoa and liquor,” said another. More dire was coffee’s transgression into the habits of womenfolk. A correspondent wrote to Gandhi that the greatest obstacle to the success of the non-cooperation movement in Madras ‘are our women. Some of them are very reactionary and a very large number of the high class Brahman ladies have become addicted to many of the Western vices’. He rued the fact that these women drank coffee not less than three times a day.

What is interesting is that the reaction to coffee changed dramatically in the 20th century. Venkatachalapathy argues that notions of what constituted Tamil identity came to be articulated through coffee, or ‘kapi’. Why this occurred and who the authors were is a very difficult question to answer. In many cases, these traditions, as Hobsbawm and Ranger point out, are partly invented, and partly evolved in private groups or informally over a period of time.

Coffee hotels or coffee clubs that served coffee with tiffin sprang up everywhere from the 1920s to 1950s. Run by Brahmins who reserved separate sections for those of their caste in these hotels. Dalit writers abhorred this custom. Here is a definition in the Tamil equivalent of Devil’s Dictionary: ‘A public tavern instituted by Brahmins. A messenger from God to break Brahmin orthodoxy.’

Tamil Brahmins created utensils that would accommodate their notions of purity. Coffee was served in metal tumblers with rims, so that it could be drunk without sipping and thereby reducing the risk of pollution. The attributes of good coffee, also referred to as ‘degree coffee’ included no chicory, cow’s milk (not buffalo milk, which was seen as a sign of cultural and moral degeneration), and was to be savoured at frequent intervals in small tumblers (not large ones), at a temperature that could be gulped down without burning the tongue. Remember that the right way to drink coffee was to tilt one’s head, raise an arm and pour coffee into the mouth from at least a foot away to avoid the risk of the lips touching the rim.

An interesting aspect of these commandments, particularly the latter two (savouring in small but frequent doses, and warm but not piping hot) is that Italians (who are fanatical about coffee) too follow these directives. Coffee professionals these days say that good coffee should be savoured at a warm 46≤ C rather than very high temperature (which is reserved for bad coffee). It does make one wonder if each food, in this case coffee, expresses its most flavourful self at a particular temperature and in a specific type of roast.

Tea and tea-drinkers came to be identified with non-Brahmins, the urban working class, and low prices. Here we see a difference in the way tea was viewed by North and South Indians. In the north, all castes and classes consumed tea. In Madras, the middle-class appropriated coffee, though The Hindu newspaper served coffee to its press workers. The rest of the urban working classes were supposed to frequent teashops and (military) hotels run by Muslims.

Ironically, tea performed a similar function for the upper class in England during the late 17th and 18th centuries. But tea drinking soon spread to the masses in that country by the late 19th century because tea became a symbol of urban sociability, and its medicinal properties were extolled in magazines and newspapers. Not so in India, where initially, North Indians proved resistant to tea, while coffee had already established a toehold in the south.

It was only in the early 20th century, during World War I (and the dangers faced by cargo ships), that colonial authorities decided to sell tea locally. Concerted attempts were made by the tea industry to inculcate the habit by providing the drink cheaply at railway stations and in mills and offices and tea shops on the roadside. The Tea Board employed tea demonstrators to go to houses in large towns and cities and show them the proper way to brew tea. But the locals, who were used to drinking milk, did it their way. The result was quite un-British—burkhevaali chai (a layer of cream on tea), sweet milk tea and spiced tea. Tea in most parts of India except the south had, in Gautam Bhadra’s words, made the journey from being an imperial product to a national drink.

So, why invent a tradition? The two British historians find three overlapping types of reasons: a) those establishing or symbolising social cohesion of groups (coffee among Brahmins and the middle classes fits in here); b) those establishing or legitimising institutions (pomp and pageantry); c) and those whose main purpose was socialisation, the inculcation of beliefs, value systems and conventions of behaviour.

The difference between old and invented traditions is this: the old ones, such as not touching the tumbler with one’s lips in order not to pollute it with saliva, are a strongly binding social practice among some groups, whereas an invented one tends to be unspecific and vague as to the nature of values it inculcates in a group (think of patriotism, school spirit, painting the colours of a flag on one’s face for a football or these days, even cricket matches)

What we can say is that the view of tradition as an age-old practice has to be revised. As does the notion of a strong and unchanging link between a tradition and an identity. Change is the constant for us these days, particularly due to the ongoing technological revolution.

How tradition will comport with the global hobnobbing created by technology remains to be seen. We are in an age of more sophisticated scientific instruments, more rapid dissemination of hypotheses (two cups of coffee brings down blood pressure, or two glasses of red wine will reduce one’s propensity to have a heart attack, and so on) and more willingness on the part of people to change their eating habits and lifestyles. At the same time, we yearn for some fixed and unchanging points. Like the first cup of coffee in the morning. This is, after all, the reason why tradition emerges or is invented. It would not be surprising if we see a renaissance of the 19th century European style coffee houses in India. One of the best ‘retro’ coffee houses I have been to, and have made it a habit to visit each time I am in Chennai, is housed in Sunder Mahal in Jeypore colony. May a thousand more such C-houses bloom!