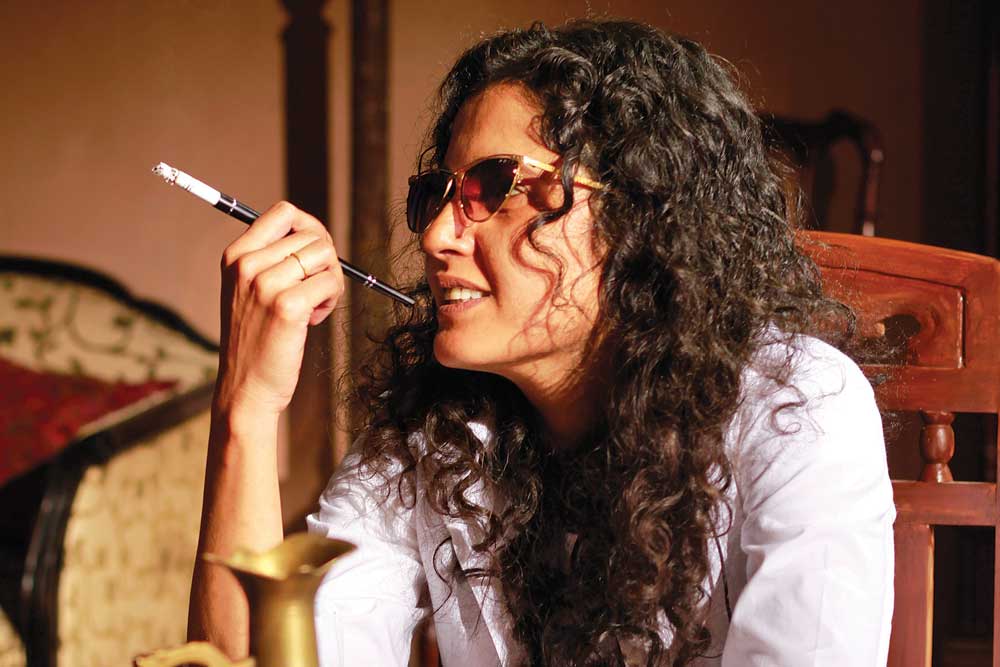 JOBS IN BOLLYWOOD films can be tedious. For example, consider the role of the incompetent cop who forever arrives late at a crime spot like at a Marvel end-credits scene, or the cabaret dancer thrusting herself in an item song. A slight shift in script, and those doing these roles would find themselves unemployed. This threat, it appears, hangs ominously over behind- the-scenes professionals as well.

Production designer Vandana Kataria recalls with amusement how she would be offered project briefs that were remarkably similar to her last film. After Oye Lucky! Lucky Oye! (2008), a charming film about a con artist, most of it shot in Delhi, she was asked to oversee the design of ‘Delhi films’. After Shanghai (2012), the Indian adaptation of Costas Gavras’ Z, the offers were either cop films or those set in Maharashtra. After Detective Byomkesh Bakshy (2015), her last Hindi cinema project as production designer, set in 1940s’ Kolkata, the offers turned to either Kolkata-set or period films. “In our industry… you do one thing, and people think, ‘Oh, she is good at that.’ So they send you more of that. But the truth is everyone can do, I imagine, everything. Or at least (they should) be allowed to try out and find what kind of film they have the acumen for,” says Kataria, who despite being one of the industry’s top production designers, has only done three feature films in over 10 years.

Kataria—who studied design before working in the movie and ad film industry—is in her early forties. She is a slight woman with a head of curly hair and a nervous tic. When she is engrossed in a conversation, she moves close to the table to emphasise a point, and in those moments, under the curls, her face lights up with passion. She has no bank balance, she says at one point, adding how she has been picky with projects, rarely ever considering the financial aspects of one and always focusing on how creatively stimulating it appears. She is currently toying with the idea of relocating to Goa, where she can, she hopes, continue working in films. “I’ll buy a house there or rent it or whatever,” she says.

After Detective Byomkesh Bakshy, Kataria took a year off to develop the script of a film idea she had long hoped to direct. The production design offers coming her way were uninteresting and repetitive. And unless it was something different, like a film in the science- fiction, fantasy or horror genre, she says she doesn’t see herself returning to it anytime soon.

Now after about a decade in the industry and with a good body of work behind her, she wanted to make her first film. But her idea took time to find backers. The project has now been approved by a well- known studio and work on it is to start soon. Back when Kataria began pitching her film idea to producers, her agents had her meet the executives of Saregama’s recently set up film division, Yoodlee Films. As a studio open to experiments in the field of entertainment, Yoodlee Films is interested in creating novel forms of film content for a new kind of audience. It wants to tell stories that are real and relevant, but told with passion and a fearless approach. As its website reads: ‘We bring cinema that is driven by strong themes and a fearless ‘no compromise’ approach to film-making.’

When Kataria met its executives, Yoodlee Films wanted to green-light a number of multi-lingual films that would be made by interesting new voices that draw their stories or inspiration from world literature. The studio has announced the titles of several such films, from Ascharya F**k It, which is inspired by Saadat Hasan Manto’s works, to Ajji, a dark take on the fairy tale Little Red Riding Hood. Kataria began to toy with the idea of a Merchant of Venice adaptation in the grimy world of Mumbai’s thugs and petty thieves. But she jettisoned that soon for another idea: a film set entirely in a boarding school, where its students are preparing to stage a play for their founder’s day. The overarching theme of the film was to be bullying. The film, titled Noblemen (the school’s name is Mount Noble High), has been shown at several film festivals, most recently at Kashish, the queer film festival in Mumbai, and is expected to be released sometime later this year.

Kataria, who studied in a boarding school during the 1980s and 1990s, had a wealth of experience to draw from. She also interviewed students, their parents, teachers and principals, she says, to understand if bullying was still as prevalent as it was during her childhood. “What was kind of strange is that nothing much had changed,” she says. While there was much more awareness about bullying online and in school, bullying she found was still as widespread, and on some occasions much worse. “One thing I did notice is that boys who are or appear to be homosexuals get bullied a lot these days,” she says.

The visuals of the film are pretty, given its hill station setting, but the depiction of how bullying often plays out is unsavoury. It is a dark film, even disturbing in parts

She has used her own experiences and cases she encountered for the story of an upper-class all-boys’ boarding school (except for a few girls who are children of the school staff) where bullying is rife. The lead character in the film, Shay (played by Ali Haji) is a young teenager who is probably gay. For the school play, he is cast in the role of Merchant of Venice’s Bassanio —the romantic and extravagant lover of the female lead Portia.

At one level, the basic plot of the film is the way bullying plays out in schools and afflicts those who are weaker, gay, nerdy or overweight. But there is a deeper, more interesting layer that is concerned with persecution and revenge, and how these emotions can inhabit and change the inner worlds of young individuals. Especially interesting is the constant interaction between the film’s story arc and the play being enacted in it. The characters in Noblemen want to play certain roles in the play, while within the wider narrative of the film they are not necessarily the same people. They are not the roles they are preparing to enact. Their names provide clues.

When Kataria first began working on the film, several people told her they were sure—given her work as a production designer—that she would make a pretty film, something she admits would annoy her. The visuals of the film are pretty, given its hill station setting, but its depiction of how bullying often plays out is unsavoury. It is a dark film, and some of its depictions are even disturbing. It might be set in a boarding school with an undercurrent of homosexuality running through it, but it is nothing like the typical Karan Johar kind of candy-floss. Neither is it your atypical LGBT indie film about coming out of the closet or discovering an alternate sexuality. It is something else. About bullying, yes. And about persecution. But equally about revenge. In the end of the film, after all that pernicious and dreadful bullying (except for the character of one teacher, recently arrived at the school) none of the residents emerges unscathed and noble.

Kataria’s approach to production design is usually laborious and intensive, which stands out in a film industry that compromises this aspect of the craft much too often. The way she approaches her work, she explains, is not just to imagine and re-create the world of the film, but to draw small little worlds for every character, even though all of it may never make it to the final cut. For Detective Byomkesh Bakshy, she started her work long before the film even existed as a complete screenplay. “The film was set in Calcutta, ”she says as she raises a finger, “the 1940s,” she raises another, “the Second World War,” and a third. “And I know nothing about Calcutta, the 1940s and the Second World War… The way I see it, Vandana doesn’t choose for Byomkesh. I let Byomkesh chooses for himself. Which means I have to study and prepare Byomkesh’s world thoroughly.”

Kataria dug up archives, read books and watched films based on that era. She interviewed people from that period, convinced them to open their homes to her, even their old trunks, and fished out old letters and family albums.

“For me it is never about the money or what I can or cannot do. It is always about the process. That’s what I enjoy most,” says Kataria.