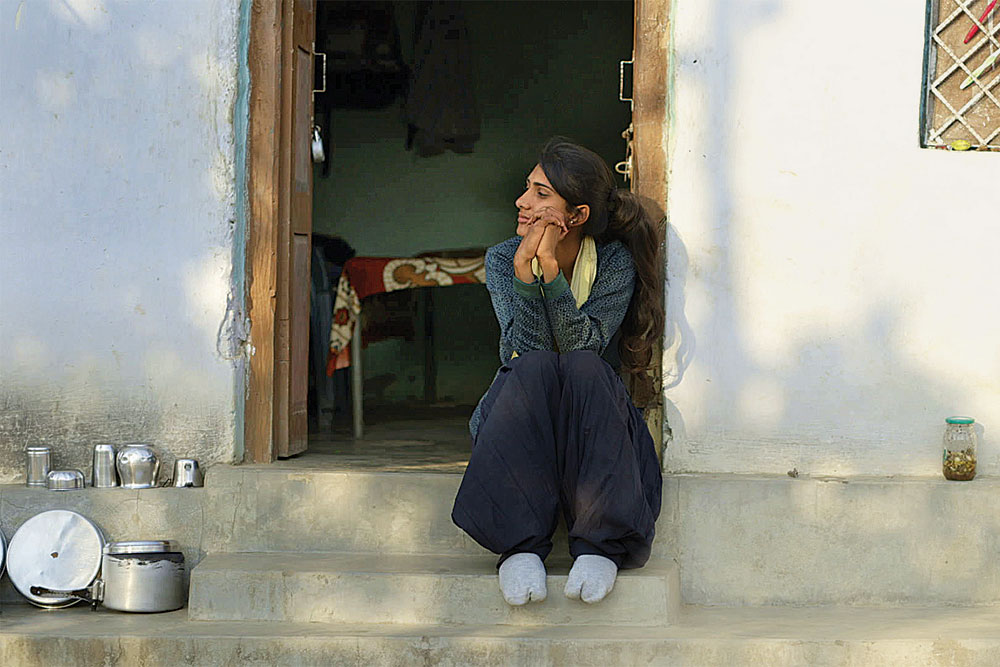 
APART FROM THE occasional cat or goat’s shuffle and the con­tinuous birdsong, there is only silence in the air. Even when a boy runs on a road on the moun­tainside, his footsteps simply echo in Semla, a village in Uttarakhand, in the documentary Ek Tha Gaon (Once Upon a Village). The silence is magnified by the absence of people. The shots of the undeniably beautiful mountain­ous terrain with its vast clear skies and greenery are constantly contrasted with Semla’s abandoned buildings and farms, with overgrown grass, broken doors and fissured walls. The opening titles provide an explanation, stating that the 800-year-old village of Semla, with only seven inhabitants, is one of 1,053 ‘ghost’ villages in the state of Uttarakhand.

Ek Tha Gaon’s director Srishti Lakhera tells Open, “Semla is in a unique situation, as it is one of the worst-hit villages. Other neighbour­ing villages are similar in that there is a lot of migration, and many, espe­cially younger people, leave for better employment, but they still have at least 50 people.” Though the documentary reflects the viewpoint of several of the remaining inhabitants, it primarily follows two women; the 80-year-old Leela Devi, who throughout the docu­mentary is insistent about staying in the village, alone if she must, and 19-year-old Golu, who is desperate to escape from the village. “When my friends from the towns ask what I am doing, I always give the same reply. ‘Nothing,’” says Golu.

The stark depiction of this documentary, which shows the reality of many Indian ghost villages, has made it clinch the award for best Indian feature film in the third edition of the All Living Things, Environment Feature Festival (ALT EFF). This recent­ly concluded festival ran in a hybrid format both online and across several cities in India. This edition show­cased 55 films (animation, short, and documentary) from 35 countries, all with environmental themes. ALT EFF co-founder Kunal Khanna explains the grave difficulties shown in Ek Tha Gaon. “Climate related migration is go­ing to be a massive issue, as more places are being affected by climate change and will not be habitable on a perma­nent basis. Ghost villages are also an implication on the way the habitat around the village is managed. It is also often the livelihood that comes from farming and agriculture, which are in tune with the environment, and no longer supports the standard of life that they wish to live.”

For those still in Semla, the growing loss of farming is a crippling setback. In her sparsely furnished, dark room the elderly Leela Devi struggles to light a fire. “There is no paper,” she says. “I’m using pages from the Mahabharata.” In the light of the blaze she peels potatoes for cooking. “There was once a time when the farms were brimming with people. It was like a fair,” she remem­bers. The shot switches to the middle-aged Lakhi Bhai walking in the barren fields. “Can you imagine this farm was once fertile?” he asks. This was only eight to ten years ago. “Ever since people migrated, this place has become desolate. These were all farms,” he says pointing at the overgrown fields signalling years of neglect. People who have the means migrate with their families to urban areas for better facili­ties and prospects. “If we had money, we would move too,” he adds in the same resigned tone all these villagers speak in.

The seven inhabitants do their daily chores without any expectation of change. This is more pronounced with Golu, who spends most of her days wandering around the empty village. She watches TV on a small set with few channels and patchy reception. “If I stay here, I think I will become a thief or dacoit,” she muses. “I want a job, any job. One has to leave to get a job.” She adds that she has no desire to study further as there is no guarantee of employment. The lack of options affects Dinesh Bhai, a Dalit, more painfully. He finds it especially difficult to eke out a living from the barren fields. “People in our caste are landless. There are no jobs or opportunities,” he says. “Even if I had three or four fields, my life would be much easier. The owners would rather leave the farms barren than leave it to us,” he adds.

Rishikesh-based Lakhera has close ties with this village, as her father was from Semla. During visits to her parents, they spoke constantly about how the village was getting emptier, and that yet another family had left the village. She also heard these stories from other families. Realising there was a story in Semla, she began visiting it. On her first visit, in 2015, she met the main character Leela Devi. “Spending time with her, I heard her story, and I understood there are other perspectives in the village, that need to be explored. She was a starting point,” says Lakhera.

In 2016 Lakhera started shooting. It took her and her vol­unteer crew around five years. Apart from directing the film, Lakhera co- produced it along with Bhamati Sivapalan. “We ran a crowdfunding campaign, and so we connected to some individuals, and they gave money to support the films, and some people came in and ran a website for us,” she says. By 2019, they were done shooting and editing, so the filmmaking was not hampered by the pandemic. “The only thing we had to figure out was distributing and screening the film in 2020, as all the film festivals went online,” she adds. The film won several awards, including the Audience Choice Award at Seoul Eco Film Festival, 2021, as well as the Special Jury award at the International Documentary and Short Film Festival of Kerala. This film, though Lakhera’s first feature docu­mentary, is one of her many accom­plishments in a decade in filmmaking. What makes Ek Tha Gaon in particular so effective and memorable isn’t just the social and ecological conditions it depicts that led to its acclaim, but also the real lives of the people in it, especially that of Leela Devi‘s.

Leela Devi is indeed a resilient and redoubtable figure determined to live in her home, even though her Dehra­dun-based daughter keeps urging her to move in with her. Even during the lonely nights, when miscreants pound at her door to scare her, she remains unmoved and unafraid. “I’ll take a sickle and chop off their heads if they come in,” she says defiantly.

Time moves slowly in Ek Tha Gaon. It matches the unhurried pace of the inhabitants, and the span in which it was filmed. This ex­tended shooting process was deliberate. “What happens with feature documentaries is that you want to see the arc of a character’s life devel­oping. It does take a few years to see a develop­ment of their story’s arc,” says Lakhera. This arc becomes evident as the film follows the characters. Leela, so determined at first to stay, becomes weary with the pressing isola­tion. Golu’s arc becomes increasingly desperate. She says there is no future for Semla and other ghost villages. “These villages will disappear. The next generation won’t return.” She points out as there is no farming because of the lack of rains, there will be no food, and the remnants will be destroyed by animals. Lakhera adds that a few months ago the govern­ment announced that it would take over all non-cultivated and abandoned lands by 2026.

Ek Tha Gaon is a timely reminder of how climate related migration is emp­tying out villages. And viewers are left with the image of a solitary Leela Devi tending to her fire.