The Sad Story of Hindi Cinema 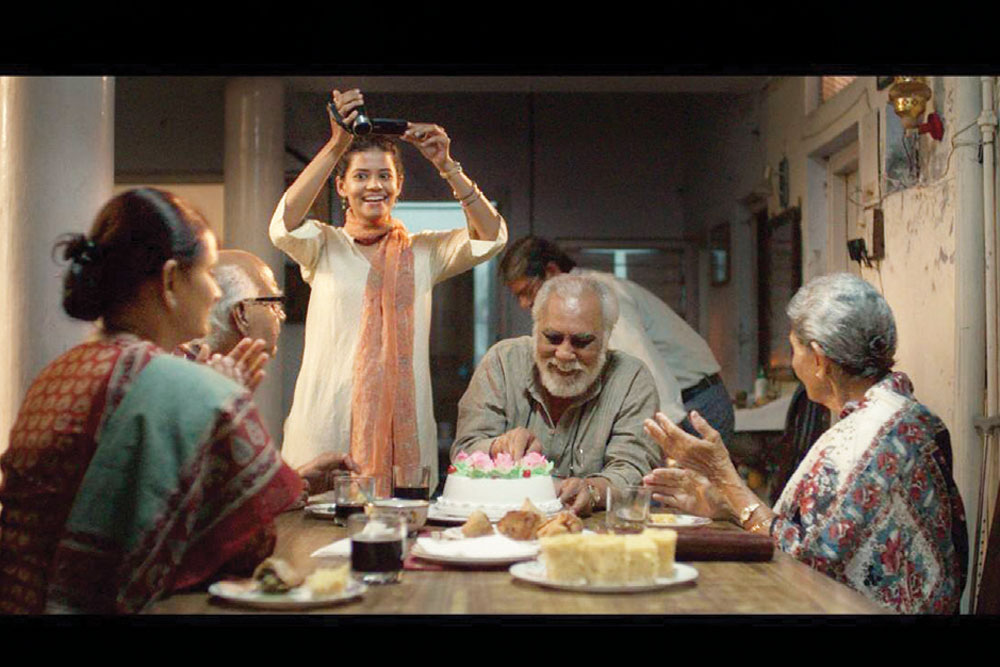 A scene from Mukti Bhawan


I’M DEAD. Get over it.” With those few words, Aisha Chaudhary, played by Zaira Wasim, sets the stage for The Sky is Pink’s tryst with grief. Between lots of laughter and many tears, director Shonali Bose tells the story of the too-beautiful-to-bear Chaudhary family struggling with the imminent death of their young daughter, embodying the immortal lines from the legendary 1971 cancer movie, Hrishikesh Mukherjee’s Anand, where Rajesh Khanna as the perennially perky patient says: “Zindagi badi honi chahiye, lambi nahin (Life should be big, not long).”

Death is commonplace in Mumbai cinema, but what happens to those left behind or those taking care of the dying isn’t. Perhaps because of Hinduism’s cyclical view of life, death and rebirth, confronting mortality isn’t given too much attention. Amitabh Bachchan’s angry young man of the 1970s died as a matter of routine in his films, whether it was Deewar (1975), Sholay (1975) or Muqaddar ka Sikandar (1978). He had to—as the voice of the rebel or the loner, he had to be silenced if the state was to survive and if society was to thrive. It was a trait picked up by Shah Rukh Khan in movies from the 1990s such as Baazigar (1993), Darr (1993) and Anjaam (1994) where he played the stalker/killer/anti-hero, echoes of which are to be found in his more recent work, Maneesh Sharma’s Fan (2016).

A product of a morally ambiguous time in India, which was being transformed by three compelling forces of Mandal-led mobilisation of other backward classes, the Ram Mandir-led majoritarianism and the opening of markets, as well as Bollywood’s own engagement with terror evidenced in the Sanjay Dutt case, the early ’90s hero was also in a state of flux. He was losing his innocence, just as India was.

By the noughties, Mumbai movies had had too much of social angst. They retreated into private trauma, with Karan Johar as the flag bearer of a new genre of cinema, the lifestyles of the rich, famous and unhappy. It was embodied by Kal Ho Naa Ho (2003), in which Aman (played by Shah Rukh Khan) literally descends into the life of an Indian family in New York as an angel. This includes setting up the love of his life with another man so she will always be loved, since Khan himself is dying of an incurable heart condition. Nikkhil Advani, who directed the film, which had been written by Johar, says the film was more about “living than death”. “It was all about how we forget to live fully in the moment. And who better to tell us that than someone who had a limited amount of time himself? Even the death scene was not really a death scene, Shah Rukh would get upset with me and say that it’s not grand like Devdas, which he was also shooting at the time, and I would humbly counter that in Kal Ho Naa Ho, death was not a full stop. It was only a comma in the life of Aman,” says Advani.


Karan Johar would return to the theme of death in Ae Dil Hai Mushkil (2016) which was all about impossible love and imminent death. Add to them depictions of death as spectacles as in Sanjay Leela Bhansali movies, from Devdas (2003) to Guzaarish (2010), Bajirao Mastani (2015) to Padmaavat (2018). All of them, argues Ajay Gehlawat, who teaches theatre and film at Sonoma State University, US, feature death and, particularly in the latter two instances, glorify it. “Several critics,” he points out, “have commented on Padmaavat’s glamourisation of jauhar, which I believe, allows its (Hindu) viewers to experience their own destruction as an aesthetic pleasure. So there seems to be a sort of masochistic wish fulfillment and sublimation taking place here, which seems particularly inflected by the current, charged, pro-Hindutva atmosphere in India.”

THE ENGAGEMENT WITH death at an individual level is also proof of the audience’s growing maturity. Screenwriter Apurva Asrani says most movies which feature deaths of lead characters, from Anand to Sholay, have been huge hits. For him, death is more than a mere end. In Satya (1998), which he edited, the titular character begs for forgiveness as he dies. In Shahid (2012), he moved the scene of the protagonist being shot dead to the start of the film, and in Aligarh (2016), Professor Siras is found dead a day before he wins his case against the university for wrongful dismissal. The more recent films revolving around death, whether it is Piku (2015), October (2018), Mukti Bhawan (2016) and The Sky is Pink are acclaimed. But Asrani believes the movie-going experience is becoming less immersive. “The emotional take away has been traded in for the multiplex/mall experience, which means it is more about the popcorn, the food, the family and the entertainment. That’s why films or series that deal with grief are bigger in the online space. That is where the stories are more personal now.”

Indeed the personal is becoming popular. The Sky is Pink director Shonali Bose lost her 16-year-old son to a freak accident and clearly understood the Chaudharys’ pain. She believes we need to be as comfortable with sadness as we are with happiness, and has an evolved understanding of grief, recovery and acceptance of death. She has put her entire soul into the movie, and says, “their story is essentially my relationship with death”. She makes the onscreen grief pitch perfect, neither too morbid nor too cheery. Nothing epitomises this better than a Christmas party scene where Niren (Farhan Akhtar) switches from a sentimental carol to a more fun song with a mere glance at his teary-eyed wife (played by Priyanka Chopra Jonas). It’s one of Bose’s favourite scenes too, fully inspired by her own family. “In fact, it’s all my friends and family in that scene,” she notes, “not extras”.

For Juhi Chaturvedi—writer of Piku (which offers many salaams to Anand) where Amitabh Bachchan gets a good death after what seems like a lifetime of constipation, and October, which deals with the friendship between a man and a woman in coma—much of the writing comes from her own experience of caring for her ill mother for almost three decades. As she once wrote on her Twitter. ‘haemorrhage/depression/renal failure/transplant/memory loss/cancer/coma made me a quasi nephro-onco-neuro-therapist/full time caregiver/writer and humour appreciator’. She was a young child when her mother had a haemorrhage, she survived that. Then there was kidney failure and a transplant, and cancer. Chaturvedi grew up in hospitals and was checking blood pressure when she was in Class VI. If anyone knows about eternal mourning, it is she, which is why her work is so authentic and yet so comedic. As Rana, Irrfan Khan’s character says in Piku, “Death and shit can come to anyone, anytime and anywhere.”

Mukti Bhawan (2016), written by Shubhashish Bhutiani, has the same sense of wry humour and inevitable sadness. A father and his son take off for Varanasi because of a dream the former has about death. The father is given 15 days at a pokey place called Mukti Bhawan and so begins his journey towards salvation, of learning to let go. He resumes writing poetry: Karo vahi jo man bhaaye, varna jeevan bhar pachtaaye (Do as you want, or you will repent). Such stories speak to actors too who are always looking for challenges. For instance, Adil Hussain, who starred in Mukti Bhawan, says he was delighted to be part of a film that deals with death. “Death is the only certain truth,” he says. “And yet it is uncertain since we don’t know when we will die. The most worthwhile action from anyone would be to gracefully prepare to accept and welcome death.”

And what’s more Mumbai movies have even learnt to laugh at death. In Seema Pahwa’s directorial debut, Ramprasad ki Tehrvi, she chronicles what happens to a family when the patriarch (played by Naseeruddin Shah) passes away. She says death is something everyone goes through and it is such a difficult time that in order to overcome it “we are just doing nonsense, things which in retrospect make us laugh”. This is the only time people feel truly helpless, she points out, saying the story came from life, and how it goes on, with or without loved ones.