The Fall and Rise of Manisha Koirala

The actor, who returns to Bollywood with Dear Maya, tells Divya Unny why she values her life away from the camera a lot more now 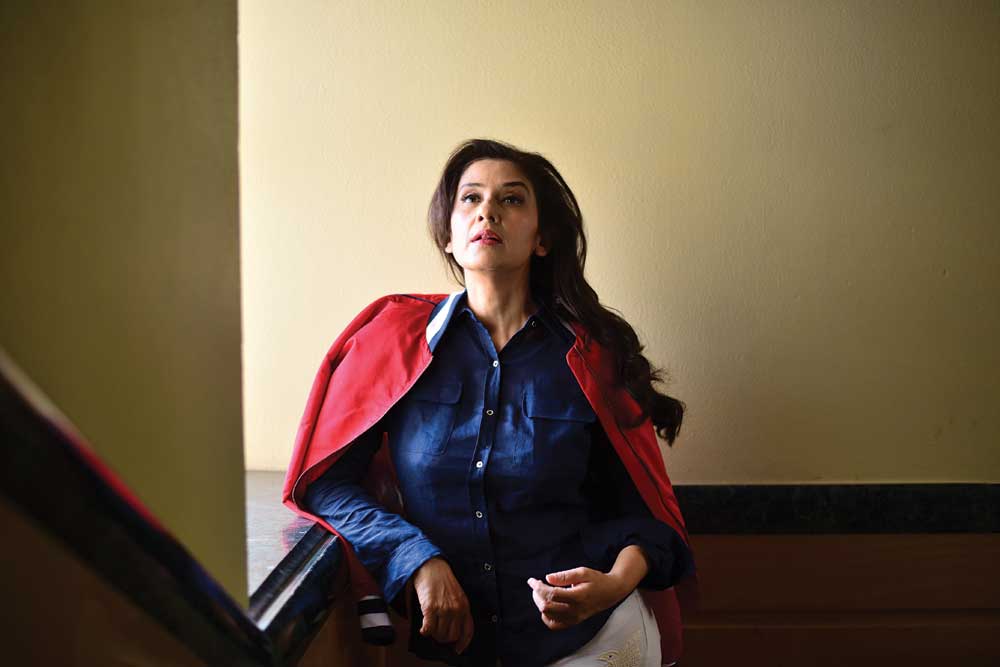 BEING IN THE film business can get lonely. Beneath the big Friday, the flashlights, the blockbusters, the magazine covers, the red carpets, the reviews, the festivals and the mutual backslapping, there are relentless moments of self-doubt no one discusses or discloses. These are moments that mostly have to be lived alone.

When I meet Manisha Koirala, I get a sense of a woman and an actor who has lived these moments, and survived them. “Come, sit,” she says just before she settles on the couch with a tall glass of iced-coffee. She looks different from what you mostly remember of her. Her bare face is ready to be slapped on with make-up, about half an hour before she enters a round of press conferences for her latest film Dear Maya. She’s happy to talk as I watch a mask being created. Sridevi was the last actress I met who was comfortable doing that. Manisha has a similar aura, one that actors today lack. One that doesn’t come from going viral on social media, but speaking only when it really matters. She avoids eye contact unless it is to communicate something deeply personal. At times it feels like she’s protecting herself by holding back a little.

“I came to Bombay in 1991,” she says looking outside her glass window, taking a large sip of her coffee. “I was all of 17 and I had asked my mother for a birthday gift—one week in Bombay to try out my luck in films. She said okay and here I was.” It’s been 27 years since for Manisha, who is easily among the most noteworthy actors we’ve seen between the 1990s and 2000. She became the dream girl almost instantly, thanks to the Ek ladki ko dekha number which she epitomised beautifully in 1942: A Love Story (1994). There was mischief in her moods and a lingering pathos in the drama she managed to create within her characters, a quality only few actors like Madhubala possessed.

Manisha moved you with her performances one too many times. No surprises that it didn’t take filmmakers long to sign her on. “I remember Shekhar Kapur signing me up within 10-minutes of being in his office. It all happened way too quickly for me to understand what was really going on,” says Manisha, talking about her younger, 18-year-old self almost as if they are a separate entity. “I was shy and impressionable, but wasn’t afraid to make mistakes.” Her debut film Saudagar (1991) didn’t do much for her. “I was just out of Army School in Delhi and found myself in the middle of hundreds of people telling me what to do at every step. I didn’t have a mind of my own, I’d just follow what I was told,” she says.

Also, life as an upcoming actor in the 1990s was different. It is really the least identified era within Hindi cinema. Stories were clichéd and plotlines were repeated, apart from the fact that female actors had little to bite into. “After Saudagar I was making one movie after another, shooting day and night. I had a group of staff who would work with me. Only my director and film sets would change. I was young and very influenced by those around me. I was told if my diary is full for the next three years, it means I’m doing well. So I began working like a machine, in good, bad or worse conditions. But I didn’t care,” she says. She was a shy girl, but was forced to put herself out there, for the sake of her career. “I became friends with confident city girls like Raveena Tandon and Pooja Batra in the hope of learning from them. That was the beginning of my socialising, meeting people, observing how they behave, trying to be them. Trying to fit into a culture without knowing who I really am.”

Although 1942-A Love Story became the hallmark film of her career, she faced rejection in the first audition. “Vinod Chopra was screen testing and I didn’t make it in the first go. I asked myself what was it he needed that I wasn’t able to deliver. It was also what really forced me to understand acting,” she says.

Apart from 1942-A Love Story, Mani Ratnam’s Bombay (1995) is the film she is remembered for. Manisha lived that part of a Muslim girl in love with a Hindu boy, who eventually protects her family against the 1992 Bombay riots. Her role as Shaila Banu goes down as one of the most sensitive portrayals of a woman, a wife and a mother in the cinema of that era. Her anxious face, half-hidden by a flying burkha in a little a south Indian village is an iconic image that’s etched in the canvas of Indian films. “I was playing a mother of two kids at the age of 24. I was sceptical, but (photographer) Ashok Mehta told me to go for it. Finally I felt like I understood what I was doing and what I was capable of. I grew up as an actor on the sets of that film,” she says.

THE HIGH, HOWEVER, didn’t last long. But unlike many actors of her era who choose not to disclose how they handled their failures, Manisha is comfortable talking about the mistakes she made. By early 2000, she confesses to have become a victim to the fame and luxury that she had worked so hard for. Bad company, a failed marriage, a bad lifestyle and too many wrong decisions were responsible for a personal and professional setback. “My films started flopping; I wasn’t interested in work anymore. I started questioning my life, questioning this endless process of getting up, putting on make-up, going for shoots and coming back tired,” she says. “There was a point when I had only B-grade directors wanting to sign me up. I didn’t see it because I was in denial. It is very difficult to see your own faults. The whole world tells you, but you don’t accept it.”

In 2006 she was detected with ovarian cancer, something that she now believes is the one thing that brought her back to life. She believes she was disconnected from reality, till she was tied down to a hospital bed not knowing if she would wake up the next morning. “It was during the course of my treatment that I realised that if we have an unhealthy mind, it starts reflecting on our body. My health was totally gone and I was emotionally broken. When I was diagnosed with cancer, I had no clue if I would live or not. That was a very lonely and terrifying time of my life. I felt I had wasted my life—if I die tomorrow, what would I be taking with me? That life had given me such beautiful opportunities and I had misused it. That’s when I decided that if I survive, I will fix my life.

It was also a time when she found out who her friends were. There were those who stuck by her even after she gave up her celebrity label. Many of them were strangers who reached out to her through the internet, providing her with the inspiration she needed. “Shail Gulati, a guy from Jammu would tell me how his mother had ovarian cancer and how she fought it and is fine now. People like him were few but mattered the most to me.”

Manisha is neither ashamed of the choices she made nor is she guilty of the errors in her judgment. She has embraced every wrong turn in the past to turn the tide in her favour now. Today, she is free of cancer and is back to doing what she does best—acting. After years, she faced the camera for Dear Maya and loved every moment of it. “It’s what I have known all my life, but took for granted. I am happy I am doing this again, but this is not going to be my everything. I have discovered that I get joy from other things in life and I want to make room for them,” she says.

This isn’t the story of someone who has only seen success. This is a story of a woman who journeyed into the dark side and came out alive. “During my cancer days, I used to look out of the window and I noticed the miracle of everyday life that we don’t often enjoy— the beautiful sunset, the flock of birds, the sound of the wind. This fame, the glory, the money, the attention—all of it seems small in front of that,” she says.

The actor is currently shooting for the part of Nargis Dutt in Raju Hirani’s biopic on Sanjay Dutt. She’s also writing a book on her self discovery, which she hopes to publish by the year end. She’s happy to take off for the hills whenever she feels the urge. There’s a group of travel enthusiasts in Nepal that she joins once or twice a year. She’s also working as the goodwill ambassador of UNFPA (United Nations Population Fund) to educate women. And she also hopes to adopt a baby girl by the end of the year. Her plate is fuller than it has ever been, but after everything she’s been through, Manisha won’t have it any other way.