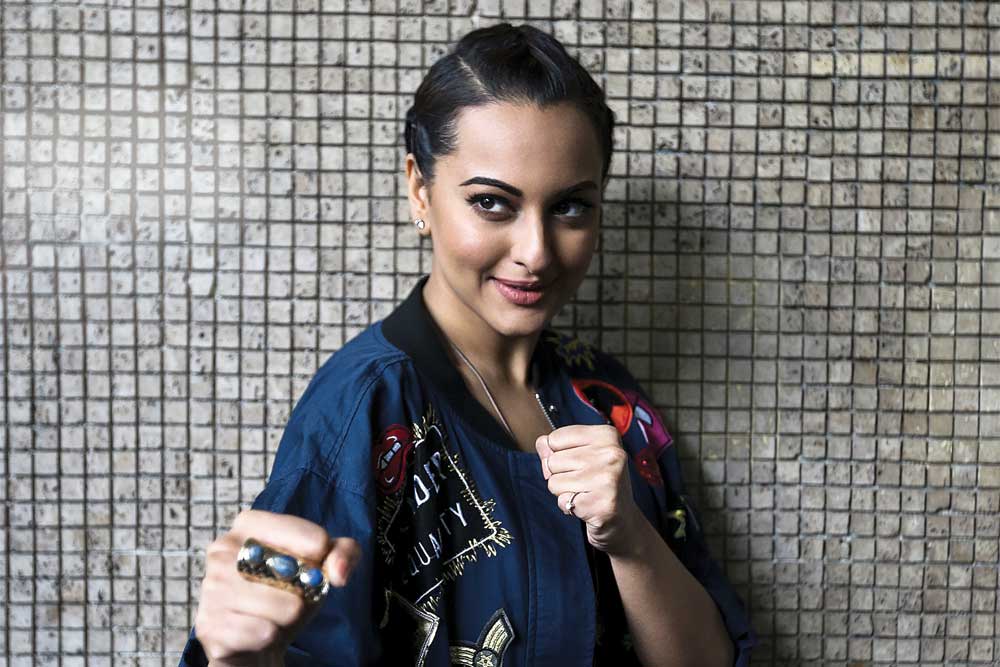 WHEN SONAKSHI SINHA was shooting for Tevar, more than a year ago, she tweeted, ‘My dad always called me Fearless Nadia. Now I know why. Ready to jump off a five-storey building.’ That was perhaps a teaser for her fans of what was to follow. With her just released film Akira, Sonakshi has set a new benchmark for action in Bollywood. The early promo of the film was enough proof that the actress had punched, kicked, fallen and risen above all others in this AR Murugadoss-directed film.

Sonakshi says, “Murugadoss sir is associated with action films, but he has always done it with the male actors. Be it Ghajini or Holiday, male actors do all the stunts. When he offered me this film and said that I was to do all the stunts in the film, I was thrilled. I grabbed the opportunity,” she says with excitement writ on her face. She is happy that today she embodies the moniker that her dad used when she was a child, that of Fearless Nadia.

For that matter, Sonakshi has always been courageous. Whatever she has done in life, she has done it differently, yet another trait she picked up early on from her father. “My father always advised me to be different, to stand out. And I have stuck by that advice.” Sonakshi does not follow any rulebooks in Bollywood. When everyone advised her against doing masaala films, she did them because she was fond of watching them. When most people thought that she could do only over-the-top films, she surprised everyone by playing the demure and emotional Pakhi in Lootera. When she was criticised by a journalist for having two left feet, she did a slew of dance numbers and proved her critics wrong. Today, she is all set to redefine her image with women-centric films. Is it the pressure from the audience or is it her own decision? “Of course, my own,” she says. “I have never been pressured to do anything. I have always followed my heart and I have always believed that there is a certain time and space for everything.”

The actress, right now, is juggling various commitments. She is promoting Akira, completing patchwork for Force 2, while also shooting for her next, Noor, a film based on the Pakistani novel Karachi, You’re Killing Me! by Saba Imtiaz. Besides that, she has plenty of brand endorsements, which keep her in the public eye between the release of her films.

She still manages to find time in her busy schedule to meet us. But when she sits down, she is all ears for the questions you ask and the conversations you want to have. Over the years, a lot has changed for Sonakshi professionally—she has worked with big stars, promoted big brands, been a much loved personality in the digital space owing to her interactive personality with fans, and has often graced the covers of magazines. But at heart, she remains who she was, someone who has a firm head on her shoulders and often reminisces about her debut film Dabangg, which put her in Bollywood’s spotlight.

For Sonakshi, Akira is a big release, not just the banner but also in terms of her career trajectory. It comes after her last three films—Action Jackson, Tevar and Lingaa—failed to make noise at the box-office. With Akira, Sonakshi is also looking to reinvent herself. “My fans and audience have been asking me to do roles which are centred around me. With Akira and Noor, I have got a chance to give them what they really want.” Sonakshi is happy with the way the Akira promo has been received by her fans and she is looking forward to the release.

She started training almost four months in advance for the role and continued to do so even during the filming. It wasn’t just the action moves she had to learn, she also had to get her body language right. “With each day of practice, my kicks and punches improved. I reached a point where I could kick hard and punch swiftly. This was also because of Murugadoss sir. He did not treat me any differently from how he would treat a male actor. I was the hero on set. He would treat me exactly the way he treated Akshay on the sets of Holiday,” she says.

Every woman should be well equipped with the necessary defence mechanisms to stand up for her rights, even against society if needed

“Sonakshi has impressed me with her action skills. She trained extensively before the shoot as well as while the shooting was on, and it just shows in the film. She has surpassed my expectation with her action stunts. Sonakshi is the action girl of Bollywood,” Murugadoss asserts.

Apart from the fact that she got to play the action heroine, for Sonakshi, this role was also a conscientious decision. She did this film because it had a strong social message attached to it. “In today’s day and age, every woman should be well equipped with the necessary defence mechanisms and also learn to stand up for her rights, even against society if needed,” she says. After Akira, Sonakshi has another action release Force 2, which requires her to do more stylised action, unlike the fist fights she has mastered in Akira.

My father always advised me to stand out. And I have struck by that advice

For a while, especially in the last two years, Sonakshi has done a lot of films, but nothing that stood out. Many in the film industry think that she might be under-using her talent by appearing as the beautiful lass in male-centric films. Trade analyst Taran Adarsh says, “She is a very good actor and that she has proved in a film like Lootera. She is a fantastic dancer and she has proved that with so many of her dance numbers in her films. But along the way, she seemed to have played too much of a second- fiddle to her heroes. I genuinely feel she should essay some out-of-the-box characters, which will put her in the category of heroines who are eternal,” he says. Sonakshi herself feels that with Akira and Noor she will change the trend and give her audience what they want. “For a period of time, there was a trend of masaala films and I capitalised on it by working on them. People may have their opinions but they do associate me with those films and I am glad that they are part of my resumé. With Akira, I found the right push in the right direction and I took it up,” says Sonakshi, who now wants to keep challenging herself with each film she does.

She is also aware that Akira and Noor are two films which could change Bollywood perceptions of her. Adarsh says, “And that is exactly what everyone is waiting for. She has already proved herself as an entertainer. If Akira does well, she would be one of the few heroines who can carry a film on her shoulders.”

Unlike many star children who grow up with dreams of becoming actors, Sonakshi did not nurture any such hopes. She was a far cry from rich Juhu kids and had a relatively normal upbringing. She travelled by autos and trains during her school and college days. Even in the confines of her home, she made her own bed and help with other household chores. Sonakshi has been athletic by nature since childhood and played a variety of sports, including basketball, tennis and volleyball. Her affinity for sports has helped her play action scenes with confidence.

In college, as a student of fashion design at SNDT University, Mumbai, she had set her eyes on a career in the fashion industry. It was on her family friend Salman Khan’s insistence that she decided to hit the treadmill, lose weight and try films. Subsequently, Khan who had told her that the day she lost weight he would cast her in a film opposite him, kept his promise and made her debut in his home production, the Abhinav Kashyap- directed Dabangg which released in 2010.

Sonakshi was instantly liked by the audience, because she was an aspirational figure to the younger crowd. Kashyap says, “The way she lost weight and prepared herself for the film, she gave goals to girls to achieve.” Her dialogues also resonated with the audience, her line from the film, ‘Thappad se darr nahin lagta saab, pyaar se lagta hai (I am not afraid of a slap, sir, I am afraid of love),’ became a nationwide craze. She was often asked to repeat the dialogue at award functions, and suddenly she became Bollywood’s favourite child. “That is because I am a spontaneous actor. My best take is always the first one,” she says.

Sonakshi’s mother Poonam Sinha says that spontaneity has been her daughter’s strong point since her childhood. “She never went to acting or dancing classes. She always learnt from the director on the set. She doesn’t take inspiration from watching any other actress on screen.” Prabhudheva, who has worked with Sonakshi in three films, believes that the actress’ greatest strength lies in her hard work and determination. “You will never find Sonakshi giving less than 100 per cent. She is a director’s actor and I don’t think any director will ever be unhappy after casting her.”

Sonakshi’s strength also lies in her being a people’s person. Be it the pictures she clicks with her crew or the daily lunch ritual she shares with them, she always maintains that human connect, which only increases her popularity.

In a competitive industry like Bollywood, where aggression is almost second nature, Sonakshi approaches her career differently and sees no reason to change this. She follows her instinct rather than a plan. “I just go with the flow, and even now I do the same thing. Right now, I am happy doing certain roles. Tomorrow maybe I will feel the need to change. I will do it when the time comes,” she says.