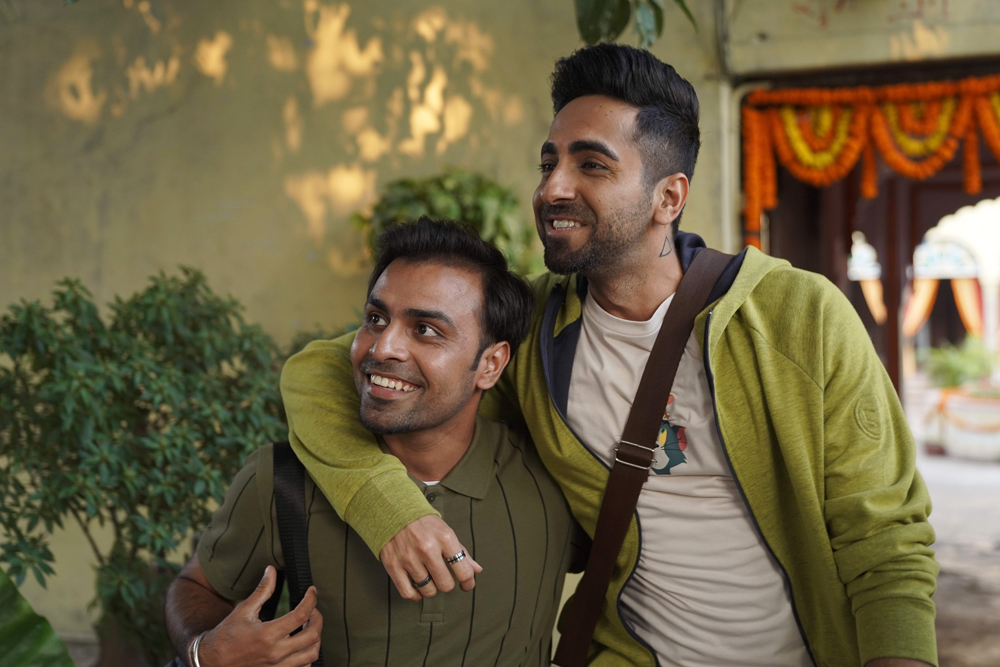 In the process of sensitising an audience to homosexual love, this movie throws the Gay guideline at you. It teaches proper etiquette when dealing with a couple, calls out homophobic attitudes to same-sex attraction, and, at the end of the film, actually waits for the Supreme Court Judgement on Section 377, before shooing a Police posse away from a wedding party.
The central character in the movie, Kartik Singh, functions as a poster boy for the revised statuette book, and keeps reminding assorted members of his lover’s traditional family in Allahabad of how outrageously homophobic they are. To make his point clear, Kartik dresses flamboyantly, dances like a dream-boy, takes off his top to celebrate his sexual orientation, and minces along self consciously, instead of simply walking. His boyfriend, Aman Tripathi, a more reticent personality, squirms with embarrassment at this overt display, but seems to have surrendered himself into acquiescence, influenced by the sheer joie de vivre of his dominant partner, and the quality of bravado displayed by him.
Coming out as Gay is an independent and individual choice, but Aman’s  spokesperson, his lover, Kartik (Ayushmann Khurrana), seems to have left that part of sexual etiquette out. Aman (Jitendra Kumar) is in awe of his demonstrative boyfriend, but may have liked to break the news more gently, more progressively, and with more subtlety to his family, particularly to his father, an old worldly, distracted and preoccupied man called Shankar (Gajraj Rao). He is not given this opportunity, because the script is hell bent on bringing forth every single behavioural or legal issue on alternative sexuality, to a jury of bigots at a North Indian wedding party.
The reaction of these people to a run of the mill, heterosexual relationship, is so full of innuendo and double talk, their responses to two men making out is expectedly catastrophic. It is their ‘hilarious’ comments that form the essence of the comedy in ‘Shubh Mangal Zyada Saavdhan’. The film seems quite uninterested in telling us a backstory about the couple’s relationship; how Kartik and Aman met, how they fell in love, the quality of their live-in domestic equation in Delhi. The idea is to milk the humour emanating from the local yokels, and to check out the levels of their joke meter when one of their own confesses to getting it on with a guy.
Kissing and hugging seem to be this movie’s only expression of romantic love between two men. In point of fact, even the relationship between Aman’s parents, Shankar and Sunaina (Neena Gupta), is more layered, and is described more convincingly. The elderly couple display the lived-in reality of people who don’t really like each other, but have fallen into habit and co-habitation. Particularly vitriolic in his opinions, is the old man.
There is a scene in which he throws up after he sees his son kissing a man, and a second, immediately after, when he hoses Aman down at a railway station.They are impactful scenarios, and signify disgust at the mere possibility of same sex love. So, despite the pamphleteering about homophobia, the movie shows nausea at the physicality of it all.
Ayushmann Khurrana is a star of this new middle cinema, and has had much success in creating a well defined niche of his own. But lately, he seems at risk of becoming a victim of his own image. He keeps repeating his out-of-the-box role selection. His performance is more formulaic, every time. It is brave of him to play a female impersonator, an erectile dysfunction sufferer, a thin man married to a fat woman, and so on. Now, when he gets an opportunity to play a Gay man, he plays him to the hilt, and  overdoes it.
This is an amusing film, in parts, but it is not, by any stretch of imagination, a ground breaking work on Gay love.