His image off and onscreen was of a sophisticated and elegant cosmopolitan, but he was also a theth Punjabi, a Kapoor, who lived life big, fond of his drink and food 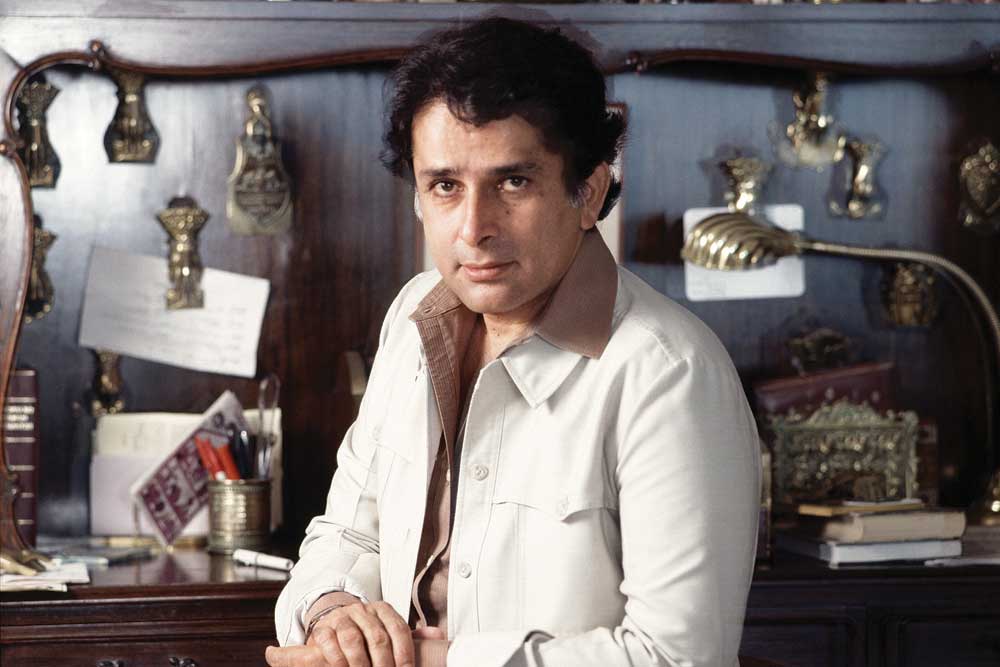 THE OUTPOURING OF love and grief over the passing of Shashi Kapoor is extraordinary; but then he was an extraordinary man. Born into film royalty, the Kapoor dynasty, he was someone who could move between Hindi cinema and Western art cinema as well as theatre. He was a true crossover star whose effortless onscreen charm perhaps led people to love him rather than admire him.

I have to get one thing out of the way at the beginning. Shashi was beautiful. His eyes, with their exaggerated lashes, his curly hair and tall slim figure might have made him almost intimidatingly handsome, but then he’d smile a goofy grin with his crooked teeth, the imperfections making him even more lovely and more human.

Shashi’s image off and onscreen was of a sophisticated and elegant cosmopolitan, but he was also a theth Punjabi, a Kapoor, who lived life big, fond of his drink and food. He was the man we had crushes on in our teens, which stayed with us all our lives. He wasn’t a he-man, he wasn’t effeminate, despite his great beauty, but he was adorable, the perfect romantic hero, non-threatening, funny, charming and full of life. His masculinity was a refreshing change from the macho posturing and misogynistic heroes who flaunted their rippling muscles.

Shashi, born as Balbir Prithviraj Kapoor, was born into Hindi film’s first family, the Kapoors. That year, 1938, his father, Prithviraj, was already a big star and by the time Shashi was 10 years old, his brother Raj was directing his first feature, Aag (1948). Raj cast his handsome younger relatives to portray him as a child, starting with Shashi before moving onto his son Rishi in Mera Naam Joker (1970). It was surprising that Raj didn’t use his handsome younger brother more often, but Shashi starred in Raj’s Satyam Shivam Sundaram (1978), playing a rather unsympathetic man who fell in love with a woman’s voice without connecting it to his scarred wife (Zeenat Aman) whom he had rejected. This was undeniably a hard role for any man to play with conviction.

Shashi was a great friend of Yash Chopra, and we often talked about him in the late 1990s. Yashji told me how he had to persuade Shashi to act in his Dharamputra (1961), where he said he wouldn’t sing and dance. Yet how many songs were picturised on Shashi that we love today? I suppose my favourite is Pardesiyon Se Na Ankhiyan Milana. I love the song especially when Shashi grins as he paddles his boat against the backdrop of a paradisical Kashmir, but I also adore Mohabbat Bade Kaam ki Cheez Hai, when a happy Shashi ignores Amitabh Bachchan, the party-pooper.

Shashi brought his style to many cheesy films, but he also acted in many classics, notably with Yash Chopra: Dharamputra, Waqt (1965), Deewaar (1975), Kabhie Kabhie (1976), Trishul (1978) and Silsila (1981). Yashji felt Shashi was the big-hearted Punjabi, a character not so different from Yashji himself. Someone who could live in the present and get on with his own life without obsessing over others’. These films brought Shashi much acclaim. Dharamputra is now seen as something of a classic, one of the key Partition films, although banned on its initial release. Waqt is an epic film, also with Partition overtones, in which Shashi wore wonderful clothes—his sweater for Din Hain Bahaar Ke and his white chauffeur’s uniform. In Deewaar, he had the immortal line, “Mere paas maa hai.” In Kabhie Kabhie, he played the husband of the unwilling bride, gifting her a book of her ex-lover’s poems. He undressed her tenderly on the wedding night while she wept and sang a song from that book, but soon we see she has fallen in love with her husband. Vijay (Shashi) is a modern man who says he cares not that she had boyfriends at college— surely any man would have been in love with her. In Trishul, Shashi again bonded with Amitabh, this time as stepbrothers, while in Silsila, they are brothers who act in a famous shower scene. (I asked Yashji if he thought that scene could be read as gay. He gave me a disapproving look, and said I needed to learn the difference between gay and happy).

The film blogger Beth Loves Bollywood calls this great screen pair ‘Shashitabh’, and they were indeed well matched. Shashi had many heroines—Sharmila Tagore, Nanda, Raakhee, but never one who matched his chemistry with Amitabh.

Like many Westerners, I first saw Shashi in the films he made with Ismail Merchant and James Ivory, scripted by Ruth Prawer Jhabvala. He and Leela Naidu were a beautiful couple in The Householder (1963) where, like many young men, he has to deal with his mother’s bullying of his new wife. In Shakespeare-Wallah (1965), he is torn between a Hindi film actress (Madhur Jaffrey) and an English Shakespearean actress (Felicity Kendal). Shashi also plays himself as the Hindi film star in Bombay Talkie (1970) with Jennifer Kendal.

Shashi played an embodied Orientalist fantasy (lust in the dust) in Merchant Ivory’s Heat and Dust (1983) as the exotic Nawab who falls in love with a British woman (Greta Scacchi). Showing how cruel films are to older women, Madhur Jaffrey plays his mother. He gave a great performance as the poet Nur in their film In Custody (1994), based on Anita Desai’s novel about the fading of Urdu and its culture in the new India. Nur is a bloated old drunk, but Shashi is one of the few actors who could convey sympathy for this decadent figure, a representative of a faded glorious civilisation.

One of Shashi’s somewhat strange international appearances was as the Recording Angel in the biopic, Jinnah (directed by Jamil Dehlavi, 1998), where he has to decide whether Jinnah should go to Heaven or Hell after his death. Shashi also played a Pakistani politician in Stephen Frears’ London-centric film, Sammy and Rosie get Laid (1987).

The last starred Shashi’s wife, Jennifer Kendal, who is also well known internationally for her role in Satyajit Ray’s Ghare Baire/ Home and the World (1984). Jennifer was from a famous British acting family, which included her father Geoffrey Kendal and her sister Felicity. Famously unpretentious, Jennifer brought up their three children as normally as possible, and they all found their place away from cinema as expected of the Kapoor dynasty, with Sanjana keeping the legacy of Prithvi Theatres alive.

I met Shashi only a few times—in his flat in South Bombay, later in Prithvi Theatres, and at the Pune Film Festival some years later. Everyone said that he neglected his health after Jennifer died. Yet the charm remained and the eyes still twinkled. With two good reference works on his life and works (Aseem Chhabra and the chapter in Madhu Jain’s book on the Kapoors), it is time for us all to revisit the work of this great man, one of India’s few truly international stars. He had withdrawn from the public gaze in his last years, but we will always remember him as a beautiful and elegant actor.