After a blockbuster run in Tamil cinema, filmmaker Pa Ranjith is all set for Bollywood 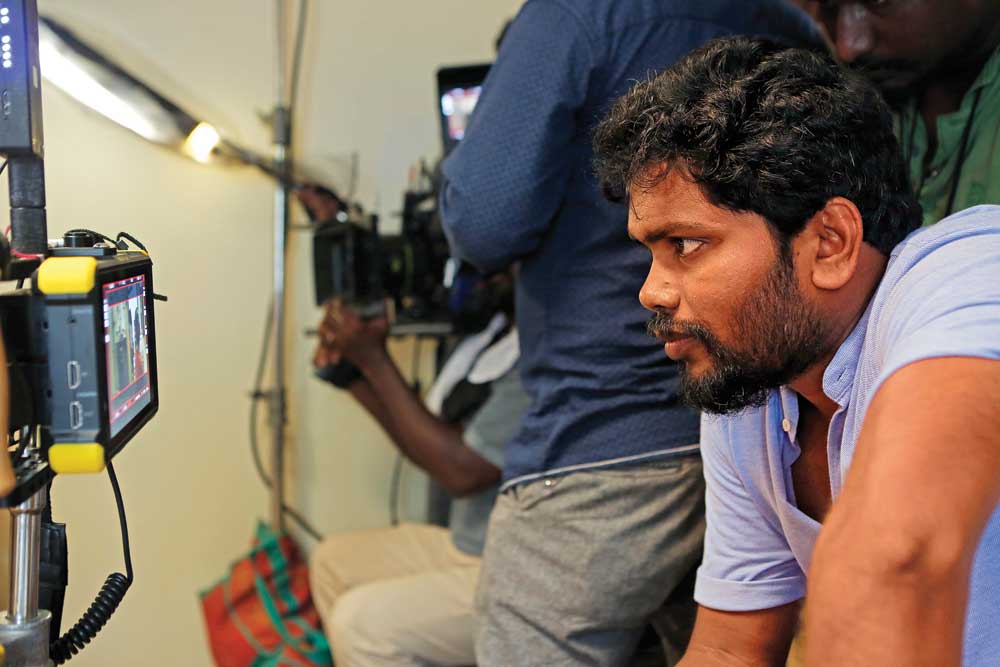 PROUDLY AMBEDKARITE, the director of new-age Tamil cinema Pa Ranjith is all set to make his Bollywood debut. His recent hits Kabali (2016) and Kaala (2018)—both starring Rajinikanth— has set off a new trend in Tamil cinema, one that is a departure from the old. Tamil cinema has been known for being political; it preaches Dravidian politics and Tamil nationalism. A few young filmmakers are following a trend started by Ranjith in their advocacy of a caste-free society. All his films, from Attakathi (2012), which he wrote and directed, to Pariyerum Perumal (2018), which he produced, advance the cause of the marginal and condemn caste- based oppression. Ranjith’s Neelam Productions has also produced the Tamil documentary Ladies and Gentlewomen, about the untold stories of the LGBTQ community.

An established name in Tamil cinema, Ranjith will enter Bollywood with a film on the life of Birsa Munda, a tribal leader from Jharkhand who stood up to British colonial oppressors in the 19th century. He has nurtured this idea for over seven years. Speaking in Chennai, he says, “I came across the Tamil translation of Aranyer Adhikar (a Bengali novel) by Mahasweta Devi. I decided that I would make a film based on it as soon as I finished reading the book.” He adds, “I have been doing research on these stories [about Birsa Munda] for quite a few years. They are very fascinating. ”

He is yet to finalise the actor for the lead role. Ranjith agrees that it is going to be a challenge, as Birsa Munda (1875- 1900) was young when he died. The director, however, is not looking only at north Indian actors to fill the role of this tribal leader who is an icon in Bihar and Jharkhand even today. “There will be actors from south Indian cinema too,” he reveals.

Ranjith has helped create an entire ecosystem of serious cinema. The double-storied Madhuban Villa in Egmore, Chennai, where his team has set up office, has become an adda for young film aficionados. Cinema enthusiasts are encouraged to walk in and partake of the food, conversations and space to dream. But film aspirants are not the only ones walking into Madhuban Villa. It has also become a refuge for those swimming against the tide. During our conversation, a young couple walked in. They were from a village near Tiruchirappalli, belonged to different castes, had fallen in love, and wanted to get married. The girl was Dalit. Given Tamil Nadu’s record for ‘honour killings’, it was hardly a surprise that the two had chosen to elope. The bride, who has little connection with cinema, explained why she’d arrived at the filmmaker’s door: “We are getting married. All inter-caste marriages happen only at the registrar’s office. We want a proper marriage and we want him to solemnise it. He is like a leader for us.”

Thirty-six-year-old Ranjith’s directorial debut Attakathi (Cardboard Knife) was a light-hearted romantic comedy which won critical acclaim for its honest and realistic treatment of its subject. Ranjith shot to fame with his second movie, Madras (2014), which was about a brutal political rivalry. It was also the film that impressed superstar Rajinikanth. In a hierarchical film industry, newbie directors seldom get a chance to meet Rajinikanth, let alone cast him in the lead role. But Rajinikanth was fascinated by Madras and wanted to work with this new filmmaker, which led to Kaala and Kabali.

Ranjith has carved a niche for himself by bringing social and political realities of contemporary Tamil Nadu into mainstream cinema. His is not the cinema of the art house. “I love all kinds of films,” he says, “but I really believe in making films that entertain people and reach out to ordinary folks.” His films do not compromise on his politics and show a natural progression of political discourse on the life of Dalits and other marginalised communities. Madras, for example, depicts life in north Chennai. For Ranjith, a place is not a mere setting for a movie. Instead, location must be woven into a film’s theme. Every place has a story to tell. So does north Chennai, the place Ranjith belongs to. He hails from Karapakkam near Avadi. “The people of north Chennai are often portrayed as criminals in Tamil cinema. When a city grows up, some locations and places are destined to be the graveyard of development. In fact, the people of north Chennai have worked hard for the development of the city.” The right to land has been a central theme in his films. “People have an emotional relationship with the place they live in. Now we all say ‘We live in Chennai’, but when I was shooting Madras (which was initially named Kaali), I noticed that people refer to the city only as ‘Madras’ and they maintain a relationship with that name.”

“I am an Ambedkarite for sure. But you should not categorise my films as ‘Dalit films,” says Pa Ranjith, filmmaker

Madras tells the story of a wall and how two political parties lay their claim to it. The right to use a wall is not as simple as it appears. The realism of the film is its strength, as it shows how this locality lacks basic amenities like water and electricity. The protagonist is Kaali, a young man aspiring for a life free from exploitation and oppression. Without being preachy, Ranjith’s politics and desire for an Ambedkarite nation come through. What is subtle in his early films gains momentum in Kabali and becomes a force unto itself in Kaala, a movie which resonates with the politics of darkness, not only through the euphoric dialogues of Rajinikanth, but through the subversion of dominant narratives of colour. The colour scheme of the movie is an assertion of blackness, in defiance of stereotypes where darkness is considered villainous and white heroic. Nana Patekar, who plays the role of the villain Haridev Abhayankar, is dressed in white throughout the film, in contrast to Rajinikanth, who is always charming in black.

Pariyerum Perumal, directed by Mari Selvaraj and produced by Ranjith, is a hard-hitting statement on caste, and creates a new kind of hero. The movie depicts the gruesome ‘culture’ of honour killing, prevalent in Tamil Nadu. It tells the story of a Dalit law student who befriends a female classmate of a higher caste—and so begin their troubles. Kathir, who plays the protagonist, doesn’t revolt against the upper caste; instead he falls deep into sorrow and depression. Ranjith says with affection for the director, “Probably, it is not my kind of movie.”

Though Dalit politics is a recurring motif in his films, Ranjith protests against being slotted as a ‘Dalit filmmaker’. He says, “I am an Ambedkarite for sure. But you should not categorise my films as ‘Dalit films’. What is our perception of Thevar Magan? Do we count it as a Thevar film?” The 1992 film starring Kamal Haasan can be seen as statement of ‘Thevar pride’ (a dominant OBC community historically seen as hostile to Dalits). Ranjith is not against making films on any community, Dalit or upper caste. “A film narrating the tale of a community is well and fine, but glorifying caste is the problem,” he says.

CINEMA WAS NOT a childhood passion for Ranjith, who used to skip the Sunday movies and roam around and play with friends instead. He got into cinema quite by chance. “I studied fine arts in college,” he says, “I wanted to be a painter. I started watching movies at festivals. It actually changed my perception of cinema itself. There were screenings at the German consulate, Alliance Française and Film Chamber. I was a regular at all these places. All these places were very elite. I was, probably, the odd one out.” But Ranjith was not bothered by elitism. “My only point of attraction was cinema. I was a mute spectator. Nothing attracted me other than the movies screened there.”

By the time he had graduated, Ranjith had chosen his path. He started out as an assistant director in films like Saroja (2008), directed by Venkat Prabhu. In this role, he learnt the technicalities of cinema, but soon grew disillusioned. He says, “It was a great learning process, but I realised that it is indeed a challenge to manifest my idea of political cinema.” Ranjith believes that the entertainment factor should not be compromised. “Cinema should communicate with the common public. In that aspect, the commercial success of a cinema is very important,” he says.

Having watched global cinema, Ranjith is quick to name films that have made a lasting impression on him, such as the Soviet silent film Battleship Potemkin (1929), the historical war film The Battle of Algiers (1966) and those of the Mexican legend Alejandro González Iñárritu, such as The Revenant (2015) and Babel (2006).

The music band The Casteless Collective is yet another unique venture launched by Pa Ranjith. His organisation, Neelam Cultural Centre, collaborated with the label Madras Records, to form the 19-piece band comprising four rappers, seven instrumentalists and eight Gaana musicians, a popular folk style in Tamil Nadu. He says, “This is a collective without caste, which aims to eliminate caste and religious discrimination through music.” A 19th-century social reformer C Iyothee Thass urged Dalits to identify themselves as casteless Tamils, instead of registering as ‘Hindus’. His philosophy inspired the band’s name, which starts its recitals with ‘Jai Bhim’ chants. The latest hit of the band is I am Sorry Ayyappa in the wake of the recent Sabarimala controversy. Their other hit number is Bhim Rap on the life and work of Ambedkar. Madrasin Magizhchi about the many joys of living in Madras despite hardships that might come one’s way is another online sensation.

With his foray into music and entry to Hindi cinema, Pa Ranjith’s blend of art with politics seems set for wider appreciation.