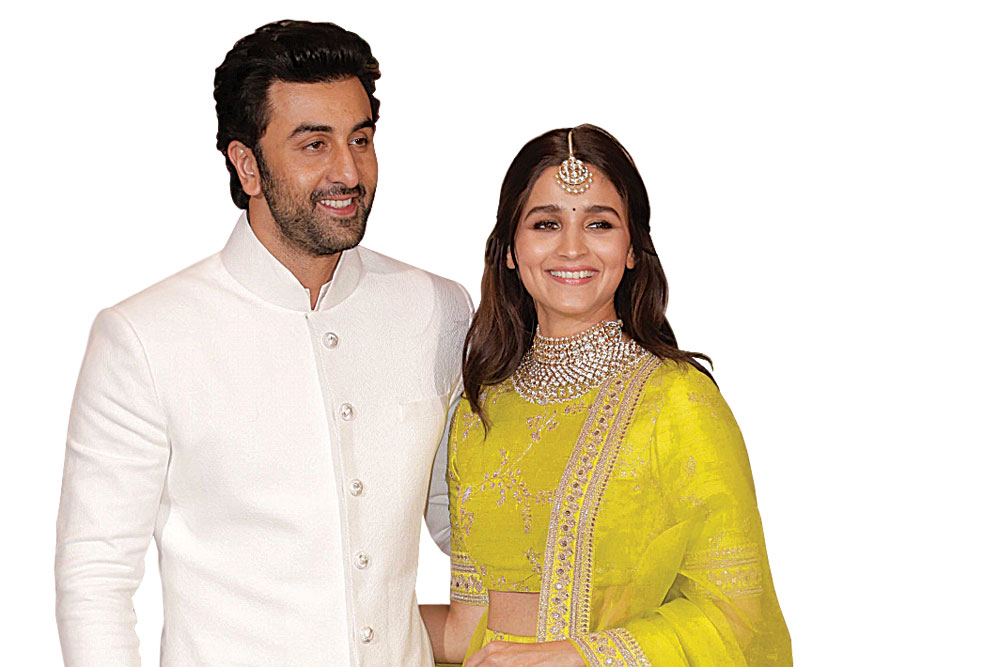 
Varun Dhawan’s wedding to childhood sweetheart Natasha Dalal that was scheduled to take place at a resort in Thailand sometime around now was called off in wake of the coronavirus situation. Apparently, no concrete decision has been taken about when the nuptials will happen because of the uncertainty over when the pandemic could end and when social distancing will no longer be required. Now there is speculation also over whether Ranbir Kapoor and Alia Bhatt will go ahead with their planned December wedding.

For one, the plan was to tie the knot right after the release of their ambitious passion project Brahmstra, which was locked in for a release in the first week of December. With that film yet not complete and its release likely shifted again, it’s anyone’s guess whether the couple will go ahead with their shaadi plans in mid-December. In light of Rishi Kapoor’s passing a few weeks ago, friends of the couple are guessing the Kapoors may want to ride out the year on a low-key note so the wedding could possibly move. Again, with the uncertainty over when the world will return to normal, the families may want to wait a little longer before making big decisions, the couple’s friends are saying.

Katrina Kaif hasn’t officially announced any new films after she completed Sooryavanshi, and with that film’s release delayed, the actress has nothing on the horizon for now. But she has been reading scripts and will make announcements not long after the lockdown is lifted, she told me earlier this week. Industry insiders have been saying she is committed to starring in a horror comedy titled Phonebooth with up-and-comers Ishaan Khatter and Siddhant Chaturvedi for Farhan Akhtar and Ritesh Sidhwani’s
Excel Entertainment.

There will also be the third instalment in the Ek Tha Tiger franchise, which is rumoured to be the biggest one yet. The film will likely be shot across more locations around the world than the first two films. Incidentally, the Tiger announcement was meant to be a part of the big Yash Raj Films 50 Years announcement which was to be made in April, but has been postponed indefinitely. To commemorate the completion of 50 years of the YRF banner, Aditya Chopra and his team had planned to reveal an entire slate of new films, including, apparently, his own next directorial venture.

Doctors treating Covid-19 patients at a Mumbai hospital were disappointed when they received a note along with a consignment of masks, sanitisers and PPE kits donated by a popular movie actor recently. The note contained a full script and a set of instructions for doctors to record video messages thanking the movie star and some half-a-dozen others for contributing towards the consignment and for its delivery to the hospital. This includes a well-known producer who also heads a top Bollywood artist management agency.
The doctors thought it was “tasteless” to ask them to record video messages of gratitude. They shared this information and their disappointment over the matter on a WhatsApp group. The request was frowned upon by others on the group too, who took to social media to shame the actor and the producer.

An influential business journalist called it “disgusting” to demand video-recorded thank-you messages. “Please! We should be thanking them for saving lives and putting their own at risk. This is not a personal gift to them. Why ‘extract’ thanks??”
Turns out that when word reached the actor and the producer, they didn’t insist on the video messages anymore, but they’d already lost a few fans by then.