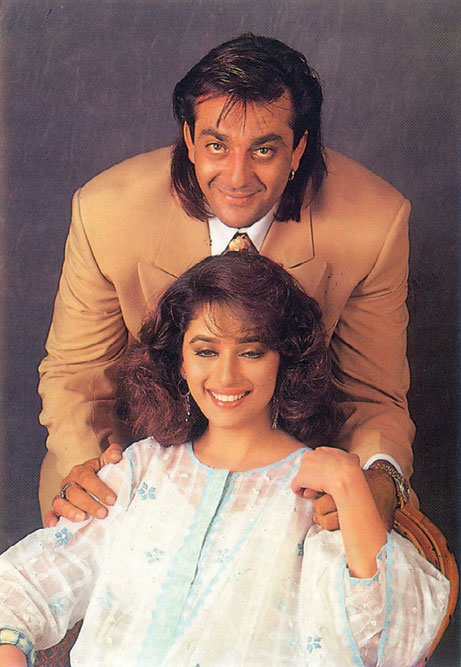 At the teaser launch of Karan Johar’s multi-starrer Kalank earlier this week, there was a mix of young ‘uns (Alia Bhatt, Varun Dhawan), middling stars (Sonakshi Sinha, Aditya Roy Kapur) and the vets (Madhuri Dixit, Sanjay Dutt). Not surprisingly, all eyes—and ears—were on Madhuri and Sanjay, starring in their first movie together in some 20-odd years and after their widely reported romance ended abruptly when Sanjay was arrested in the 1993 Mumbai blasts case. Both were professional, friendly even, giving practically nothing to eager reporters.

It’s no secret Madhuri took the role in Kalank after Sridevi, who was originally supposed to star opposite Sanjay, passed away prematurely last year. Sources from the set say there was stress and anxiety among the producers the first week the two actors were supposed to shoot together. But their worries were unfounded. Turns out it was Madhuri who broke the ice, enquiring after Sanjay’s children and sharing photos of her own boys, setting the tone for a comfortable schedule ahead.

Last weekend, any doubts anyone might have had about the ‘seriousness’ of Varun Dhawan’s relationship with his childhood sweetheart Natasha Dalal were quashed when his parents David and Laali Dhawan attended the big fat Ambani wedding with Natasha.

The Dhawans posed for pictures with their son’s girlfriend, making it clear the pair had their blessing. Varun, shooting in London for Street Dancer, skipped the celebrations but reportedly insisted that Natasha represent him.

According to the Bollywood grapevine, it could be a 2020 wedding for Varun and Natasha. Also expected to walk around the ceremonial fire next year are Ranbir Kapoor and Alia Bhatt, who friends say have zeroed in on January next year.

A prominent actress who has become particular about the projects she chooses here because it means dividing her time between two lives just wrapped work on a new film she was shooting in spurts and gaps over the last year or so. It’s inspired by an emotionally wrenching true story personal to the film’s director, and while the actress says she was instantly inclined to make the movie, it’s also true she’d been sitting on the script for months before finally picking it up to read.

Sources say the director sent the script soon after it was ready, but the actress was too busy. At that point the film still didn’t have a producer. While waiting to land her leading lady the director shopped the script around to producers and quickly found a partner in a leading outfit floated by a former studio boss. The pressure to cast the film was mounting, and repeated attempts to rush the actress to read the script had failed.

As it often happens in these scenarios, the director— with the producer now—was putting pressure on the actress’ team for a response. Her manager, who couldn’t understand what all the rush was about (she wouldn’t be the first actor to have taken months to get back about a script), decided to read the script herself before increasing the pressure on her client. Subsequently, things reportedly changed. Convinced it was a script the actress would be foolish to pass up, the manager reached out to her and told her she had to give it a chance. The actress said she would— soon. Then the manager uttered the final threat: She said the filmmakers had decided to go to another actress (her arch rival, as it turns out) if she didn’t reply immediately.

The actress pored over the script on her next flight and in 24 hours confirmed the film. She asked for the director to be flown to the US for a meeting and the project got a ‘go’ overnight. Since then she’s been a dream to work with, both the director and the producer insist.

But was the threat to go to the rival a cleverly planned stunt? We might never know.