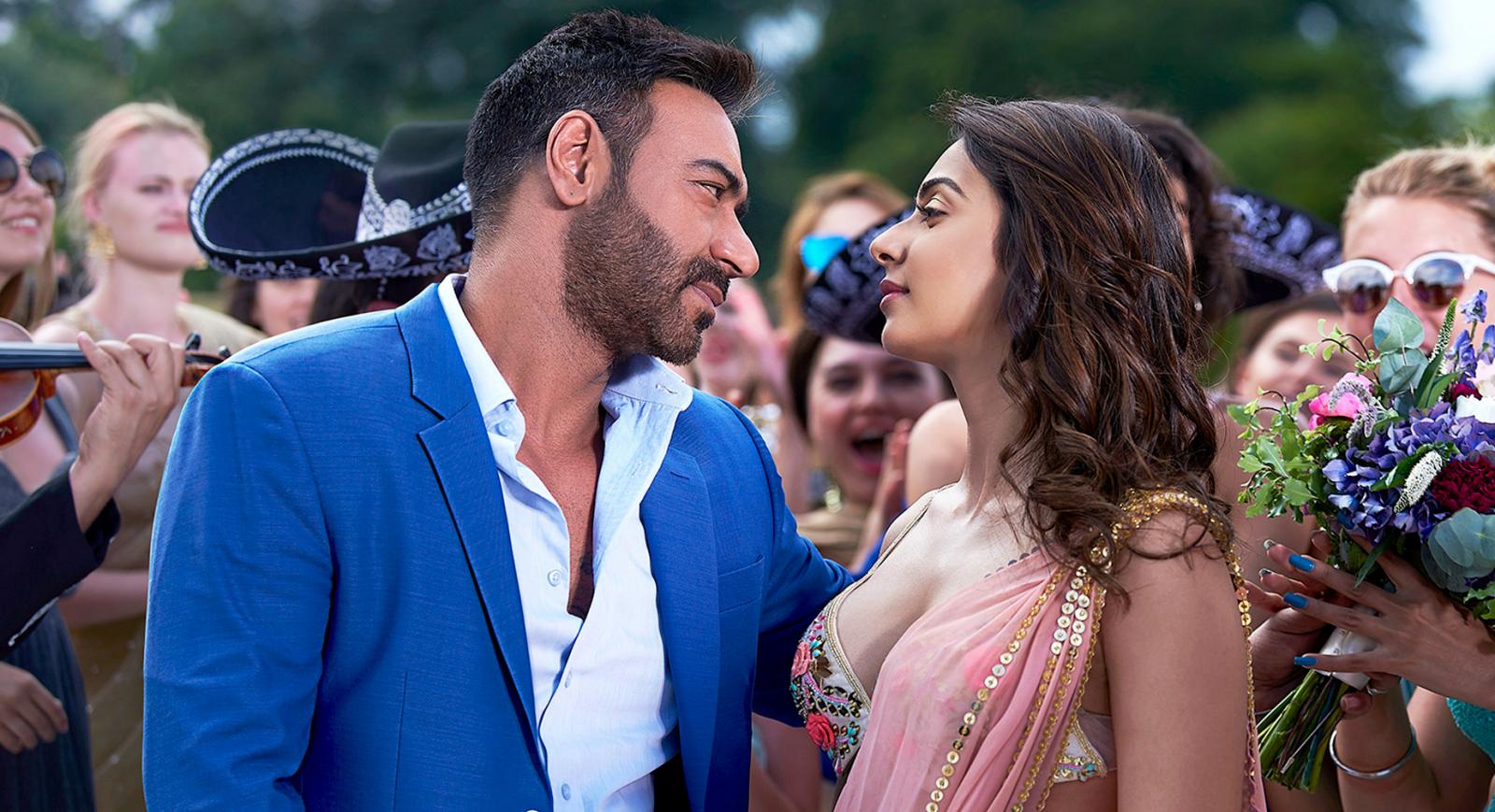 Ashish and Ayesha are Indian expats in London. Ashish is a moderate drinker, but Ayesha, who has a part time job as a bartender, tends to binge. She wakes up one morning with a hangover and discovers that she is at the posh apartment of the middle aged dude she met the previous night. She is awestruck that he hasn’t ‘taken advantage’ of her comatose condition, and ribs him about how he will rue the missed opportunity of sleeping with a girl half his age.

Ashish (Ajay Devgn) is amused by this idle chatter, while Ayesha (Rakul Preet Singh) is curious about this laid back and indulgent guy who goes along with everything she suggests. When the man consults his therapist friend (Javed Jaffrey) about why this 25 year old should be interested in him, or he in her, the shrink helpfully says that maybe she has serious Daddy issues, and he baby issues. On the darker side, he says, she could be a gold digger.

The male gaze is the least of the problems in ‘De De Pyaar De’. The first half is a breezy narrative of love transcending the generation gap, and the second is a family drama about one family – his. Ayesha is furniture. She is moved in and she is moved out. We see no friends that she talks to. We are given no back story about her. We see or hear about no parents, siblings, home, nothing – nada.

We are told that Ashish has made his money in finance, of the adventure capitalist kind. This must require the prodigious talent of a congenital idiot. When Ayesha starts to fall in love with him, and wants him to take her more seriously than he does, he does the most damn fool thing and takes her to India, purportedly to introduce her to his family.

The family is managed by his exceedingly capable wife, Manju (Tabu). There is also a son, a daughter, a father, and a mother. When the couple arrive and are greeted with shock by the jingbang, Ashish is overwhelmed by embarrassment and introduces Ayesha as his Secretary. Once again, like furniture, she is shifted from one room to another, her suitcases thrown out one moment and put back the next, her sanity and self respect severely tested by the whims of this wildly dysfunctional family.

In this movie, there is a fine opportunity to explore the nature of the attraction between the sexes, to look at how temperament and compatibility can over-ride more obvious differences. Instead, the film makers fall back on time honoured cliches and jokes, set in the background of the big, fat, squabbling Indian family.

Nothing, not Tabu’s skill in portraying a woman who married her college sweetheart and then found qualities lacking in him, nor Ajay Devgn’s bitter-sweet regret of having lost an efficient and problem solving wife; absolutely nothing can redeem a movie in which a young woman is casually informed by her much older lover that he is not divorced, as he once said he was, but merely separated; and that this difference is a technicality that can be rectified later. This is equivalent to adventure capitalism at its most perilous, with an assurance given by the prime duffer managing it that investments, financial or emotional, can be course corrected.

‘De, De, Pyaar De’ does have a few funny moments, but its lens is locked at the fixed perspective of the entertainment that can be milked from the classic older man syndrome. In truth it is a movie without a modicum of the intelligence and sensitivity required to treat the subject seriously, and so, maybe, it is a good thing that it didn’t.