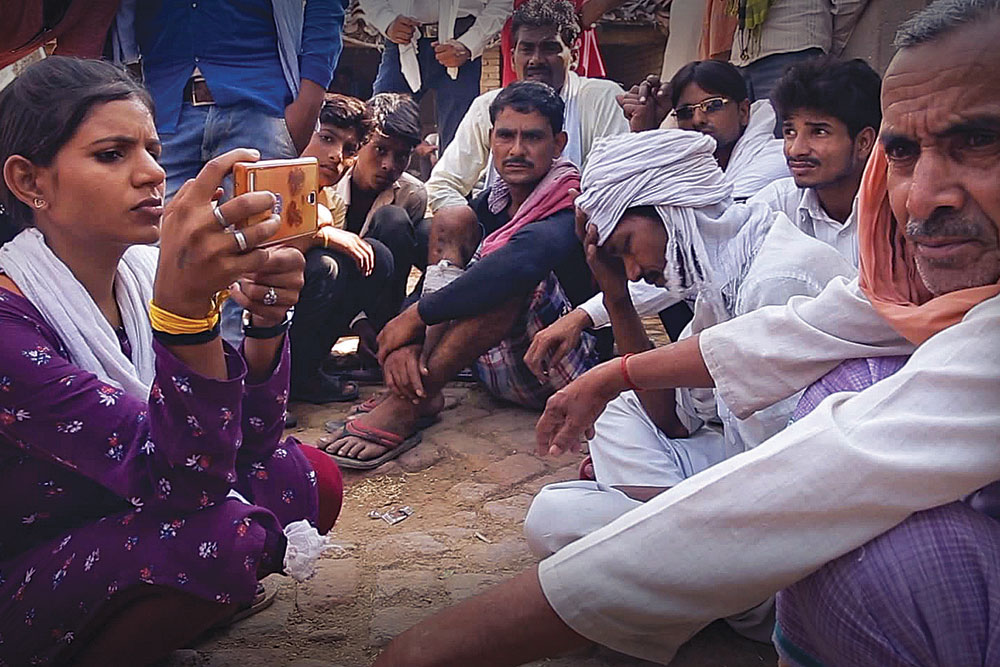 
ON A SCORCHING summer day in India, a resolute, saree-clad reporter walks into a village in the heartland of Uttar Pradesh. She’s there to investigate the story of a damaged road that has disrupted the lives of those living in the vicinity. The scene is packed with vil­lagers, media and the local mafia—all men, with some stake in the story. With a smartphone in one hand, and a pen in the other, Sunita fearlessly leans in. “You have no business here,” she’s told by a man who doesn’t bother introduc­ing himself. “You can say anything you like, as long as you say it to the camera,” Sunita says firmly.

Sunita, a Dalit from Uttar Pradesh— is one among a group of women who over the last two decades or so—played a pioneering role in Indian journalism. Khabar Lahariya, one of India’s only women-led media outlets, published in various rural dialects of Hindi, was making its transition into the digital world, when filmmakers Rintu Thomas and Sushmit Ghosh entered their lives. The above scene is from their documentary Writing with Fire, that’s now scored a nomination for the 94th Academy Awards in the Best Documentary Feature category. Writing with Fire, which premiered in the World Cinema Documentary competition at the Sundance Film Festival, 2021 and won the Audience Award and Special Jury Award at the festival, is one of a handful of recent Indian documen­taries that have been creating waves across borders. From Writing with Fire to Shaunak Sen’s All That Breathes that won the World Cinema Grand Jury Prize at the Sundance International Film Festival 2022, to Geetika Narang Abbasi’s Urf that premiered at The International Film Festival Rotterdam (IFFR) and won accolades for its tribute to Indian cinema, each of these films bring us stories of ordinary people with extraordinary lives.


A group of women in UP reporting stories and defying hierarchies, two animal activist brothers creating a home for hundreds of injured kites in Delhi, three lookalikes of Bollywood superstars inventing their own star­dom and fanbase—these docudramas tell of little-known heroes foreground­ed against social change. “Rural Dalit women who are always so invisibilised, finding a way to express themselves through news-making, through an independent feminist lens, is a big deal. For years these women have been repre­sented by the tyranny of a certain kind of narrative, and I felt that these women had rescued themselves from that nar­rative by telling their own story. They were mostly in media-dark villages where other journalists wouldn’t travel, and these are also regions that are hugely divided by caste. In a world like that, giving them the power of pen and paper, to say that your perspective mat­ters, your voice matters, has been huge,” says Thomas for whom telling the story of the protagonists Meera, Sunita and Shyamkali became imperative because of their daily gumption and resilience.

Shaunak Sen chose to tell the story of brothers Mohammad Saud and Nadeem Shehzad, who have dedicated more than 20 years of their lives to kite rescue. All that Breathes is a unique and stark portrayal of man versus wild, and the kinship between human and non-human life in an increasingly hostile environment. Growing up in Delhi, the director was always witness to Delhi’s haze, and he wanted to show the changing animal-human relation­ship in this context. “The brothers’ selfless lives and what they do was the main bulwark of the film, but it is as much a story of the city itself. Animals are constantly adjusting and improvis­ing in the city and nature is constantly evolving to the accelerated sense of things in the city. Non-human life isn’t a passive bystander to this change. The themes of simultaneity and coexistence stare back at us blatantly, and that was an important aspect to show,” says Sen who is still reeling from the recognition the film received at Sundance. All that Breathes in its storytelling and visualisa­tion is an intriguing and moving film. The siblings, who rescue, heal, feed, and then free kites from their derelict base­ment, are a rare breed. The film glides through life in Delhi and highlights the stark contrasting rhythms of the humans and non-humans. The shot of a snail making its way through in the foreground, while people busily celebrate a festival by burning wood in the background underlines this. Sen, whose previous documentary Cities of Sleep (2015) was about sleeper communi­ties in Delhi, recognises the melancholy of life in an Indian city that is rapidly changing. “This story was just waiting to be told, and we had to decide how. The film shows the inner lives of the brothers who have devoted their lives to a kind of monumental impossibil­ity of a task, and yet they go through it with grace. Within that we used the vignettes of animal life in the city, to further the emotional graph, like two horses pulling a glowing carriage,” Sen says.

Filmmaker Geetika Narang Abbasi, also based out of Delhi, captures a differ­ent kind of duality through the lens of superstar lookalikes in her film Urf. The novel subject—lookalikes or the Junior Artists—created a stir at IFFR where this culture of stardom is unheard of. Urf takes us into the worlds and the minds of Kishore Bhanushali aka Jr Dev Anand, Firoz Khan aka Jr Amitabh Bachchan, and Prashant Walde, aka Jr Shah Rukh Khan— actors who have spent their entire lives imitating Hindi cinema legends and now have their own cult following. “Assuming someone else’s personal­ity and making a career of it is unique in itself. This film is a human story of someone’s passion, destiny playing the role in defining their identity, and also their pursuit for acting and creativ­ity. These actors can’t reach where the stars are, but for people who can’t meet the superstars, meeting these actors becomes very satisfying. They were just happy to do that, and they don’t judge their art or the path they have chosen to perform. That’s the most inspiring part,” says Abbasi. Kishore Bhanushali has spent more than 40 years of his life playing Dev Anand, a yesteryear star, but is now trying to discover his own voice. Who are they when they aren’t in the skin of the superstar? The film explores this paradox with skill and sensitivity. “What they do gets them money and fame, but like any actor they have lives beyond that image. They have dealt with an identity crisis of sorts in their life. They live with that paradox, but aren’t bitter about it. They draw purpose from it. For their friends and family, they are individuals beyond actors and when they are off screen that’s all that matters,” she adds.

For these films truth is stranger and perhaps even stronger than fiction. Each of them defines the intention of the filmmakers to inherently represent change—be it good or bad. Here are films of human triumph that move you and make you think, and it doesn’t necessarily involve a monologue or a roaring soundtrack. The filmmakers also believe that this wave of documen­tary cinema in India, that is usually so driven by fiction, may actually be a steppingstone to more filmmakers moving towards telling stories that often go unsung. More than anything it has reignited hope and inspiration.

“Meera, [a leading Khabar Lahariya journalist] travelled with us to Amsterdam and she was mobbed every time people would see her. When you do this kind of heavy lifting every day—you’re not necessarily celebrat­ed—but when your life is inspiring a complete stranger, it has a kind of energy to it. She is a mother of two, who has led this change. Anyone who has been told their lives don’t matter or they don’t belong, thinks, ‘If Meera can do it, why can’t I?’ That’s the power of what they do, and the power of cinema,” says Thomas.

All That BreathesBollywoodcinemaDocumentariesjournalistslookalikesNaturerecognitionUrfwomenWriting with Fire