Kejriwal was not even their first choice. The documentary makers of the AAP moment tell Omkar Khandekar what made them zero in on the Insignificant Man 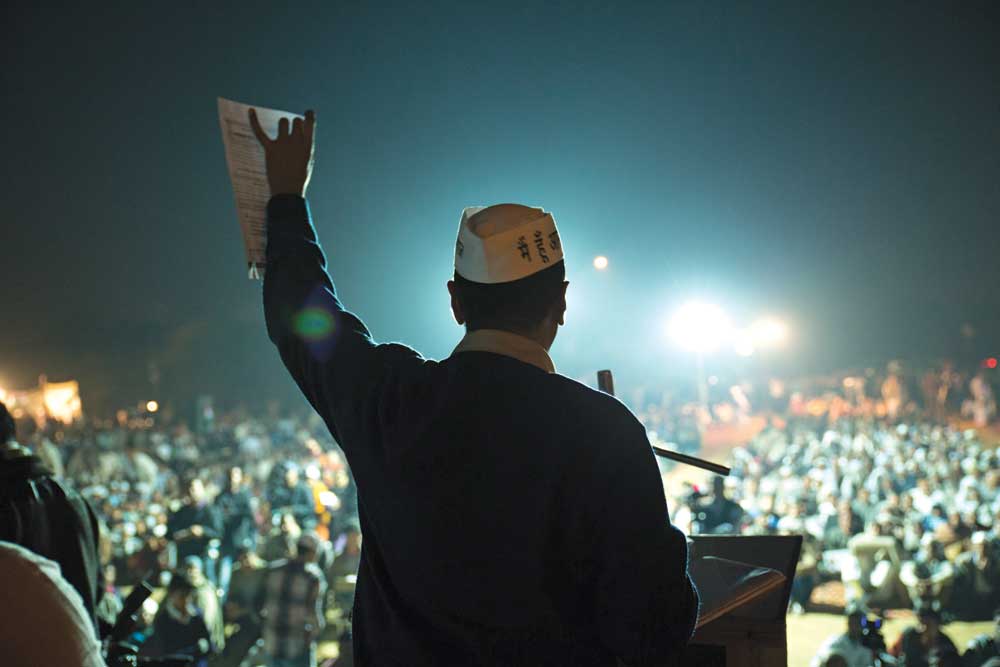 IT’S NOT OFTEN that you find your interviewees squabbling over who gets to not answer a question. My very first. She passes. He protests. She insists. He pauses. “We’ve given this answer so often, I have to rethink this,” he tells me. Then he lapses into deep thought.

It’s my fault. “What prompted you to make a documentary on Arvind Kejriwal’s Aam Aadmi Party?” is a staple question, asked by the curious, the cynics and the bewildered. That isn’t how they had originally conceived of the film, its makers Khushboo Ranka and Vinay Shukla have repeatedly said. They had approached all parties, AAP, BJP and the Congress. Kejriwal said ‘yes’, the rest were not forthcoming. So the subject of the 95-minute documentary, filmed with a non-partisan, fly-on-the-wall approach to its campaign blitzkrieg for the 2013 Delhi Assembly elections, wasn’t a creative choice. Heck, Kejriwal wasn’t even their first choice. He was, after all, An Insignificant Man.

This November night, I am at the filmmakers’ Memesys Culture Lab, a production house based in a tony bungalow of suburban Mumbai. It’s a workplace with the modern aesthetic, one which forgoes desks for cushions, conference halls for outdoor patios and HR for a pet cat. It’s nearly 9.30 pm but the lights are still on. A team of 10, fuelled by coffee, chocolates and sandwiches, is making promos, cutting trailers and liaising with distributors for an imminent release. Except for matters technical, everyone does everything.

Shukla is still thinking. I notice how tired they look. It has clearly been a long day. They don’t need any warm-up questions. I change tack. What was life like before the documentary?

The clouds seem to lift. Shukla reminisces of 2007. He had just finished college, was jumping through odd jobs and finally landed as an assistant in the eminently forgettable Harman Baweja- starrer Victory. In the days leading up to its release, he had thought of it as “the best film ever”. It was out of theatres on the third day.

“Did you feel bad?” asks Ranka, reading my mind. “I had no stakes in it,” he replies. “I was like the hundred and second [assistant director], jo sabka towel uthayega, battery charge karega...”

When Shukla met Ranka, a St Xavier’s College dropout, she was working on her first feature film Ship of Theseus with her director friend Anand Gandhi. They bonded over a mutual interest in filmmaking and politics. Shukla ended up playing Charvaka in Ship of Theseus, a devil’s advocate with a law degree. He doesn’t seem to be too proud of it now.

This was 2010. Murmurs of discontent against the ruling UPA Government were increasing. A series of corruption scandals including the Adarsh Housing Society Scam, Radia Tapes controversy, 2G spectrum scam, had hit the headlines. People across the country were fuming. Then, in April 2011, hundreds of thousands of citizens and public figures, led by Anna Hazare and aided by Kejriwal, banded together to demand the implementation of a stringent anti- corruption legislation, the Jan Lokpal Bill. But despite the large-scale resentment that spilled forth in multiple agitations, the Government refused to pass the Jan Lokpal Bill. The ground-standing seemed to work. The street protests fizzled out and fissures emerged in the protest leaders’ camp.

To Ranka and Shukla, the political significance and the artistic merit of these events was indisputable. “It was a story of activists, lawyers, poets, academics coming together and forming a party, of them having to struggle with their own idealism, the faults and shortcomings in implementing [this] in politics,” says Shukla. “It’s something that happens with every generation and it was playing out right in front of us.”

In October and November, Kejriwal had taken on holy cows of the Indian political and business class in a series of ‘exposés’. After levelling allegations of corruption against Robert Vadra and Nitin Gadkari, he held a press conference in Delhi and said that Reliance Group chief Mukesh Ambani had stashed black money in a Swiss Bank. Soon after, in a packed hall of a literature festival in Mumbai, Kejriwal read out Ambani’s purported bank account number. Several news channels received defamation notices as a result of their coverage. They effectively boycotted AAP. Around the same time, the filmmakers had reached out to AAP and had their pitch okayed. “I suppose they were more than happy somebody’s turning up with a camera,” reckons Shukla.

“I feel a wave of horror when people say that democracy is tedious, that it makes decisions more difficult. Democracy has a lot of problems but the solution is more democracy” – Khushboo Ranka, director

Over the next few months, Ranka, Shukla and another friend Vinay Rohira shadowed Kejriwal and his party members through the minutiae of their daily lives from meeting rooms and mohalla sabhas to door-to-door campaigns, news conferences, Metro journeys and poll rallies. Often, the speeches would get tedious and the heat exhausting. But at the end of the day, as they’d return to crash at their friends’ place in Mukherjee Nagar (“a student hellhole with cockroaches crawling all over”), positive reactions to the raw footage would redeem their faith in their project.

The AAP campaign was gathering steam. Audiences at their rallies were hanging on to every word. Kejriwal seemed indefatigable. But his authoritarian tendencies were causing friction within his cadre. In a memorable sequence in the film, his volunteers confront him for backtracking from his initial promise that candidate selection process would be a democratic exercise. “Swaraj ek charcha hai, sab ki charcha. Meri bhi toh chalni chaahiye na thhodi bahut?” retorts Kejriwal (“Self-rule is a dialogue. I should have a say too, no?”). In another sequence shot at the beginning of his campaign, he explains the importance of policy changes on populist schemes to a member. Later, we see his research team informing him that the electorate was most pained by scarcity of water. Should he come to power, he says in a rally that night, each household would receive 700 litres of water—free.

As documentarists with no prior experience in journalism or politics, such convulsions and compromises were fantastic material. Soon, they realised they too had to expand their team if they had to keep up with the dizzying pace of campaigning. They dipped into their savings and hired college students, training them in filmmaking equipment and technique, setting up four extra crew days ahead of the final days. By now, they had also moved into a four-bedroom apartment in New Delhi and rented out two bedrooms to keep up with the costs. Public transport was too slow and expensive, so Shukla’s brother drove down to Delhi to lend them their only family car.

But despite the party’s momentum on the ground, opinion polls had pegged AAP’s tally at 5/70 Delhi seats. In an interview with Open at the time, then Chief Minister Sheila Dixit had smirked, “Kejriwal is not even on our radar.”

She was wrong. So were the pollsters and the naysayers. AAP’s poll tally of 28/70 seats defied even the filmmakers’ expectations. In this slick, breathless climax, the film shows what it is all about: a tribute to democracy.

“Democracy is a 5th century BC idea,” says Ranka. “From then to 2013, our entire lives have changed. Our phones are more powerful than the first computer ever made. Yet, the principles of democracy remain the same… So I feel a wave of horror when people say that democracy is tedious, that it makes taking decisions more difficult, that it’d be better if the country were an autocracy. Democracy has a lot of problems, but the solution to those problems is more democracy.”

By the time they returned to Mumbai, Ranka and Shukla were effectively broke. Ranka proposed crowdfunding, Shukla opposed it “tooth-and-nail”. She put together a 59-second trailer, launched a website and set up a payment page. “Tum fail honi waali ho,” Shukla told her. “Jab tum fail hokar wapas aaogi, main tumhe yahaan khada milunga.” (“You will fail. And when you do. You’ll find me waiting here”).

They had sought $20,000. Donations poured in from across the world. By the end, they had managed $120,000. Over the next two years, there were multiple edits, fact-checking exercises, legal vettings and screenings for funders to eliminate as many loose ends as possible. But the final hurdle was still left.

“May I also talk about how the censor board is an expensive process?” Ranka interjects. “You have to spend on censor fee, spend on making a DCP, hire a theatre for the censor board to watch it, pay for their snacks and everything else. At the end of it, you are spending money you don’t have for people just so that they’ll let you show your work. Then you realise that it’s not going to happen without utter humiliation, and it’s a painful elongated process.”

After the first screening, the censor board members had refused to share their views. Ten days later, they sent a letter refusing a clearance certificate. In the revising committee, then censor chief Pahlaj Nihalani demanded they submit a no-objection certificate from Arvind Kejriwal, Sonia Gandhi and Prime Minister Narendra Modi, three prominent leaders referenced in the film. The filmmakers refused. It would set a bad precedent, they said. As the film hung in limbo, Nihalani was sacked. Soon after, the filmmakers received a clearance certificate from the appellate tribunal without any cuts.

“What do you think his problem was?” I ask.

“I don’t think we should try to investigate the mind of someone with a history of irrational decisions and whimsical diktats,” says Ranka. And that’s that.

An Insignificant Man is the first documentary to hit theatres in three years. And yet, its release was uncertain till the very end. Nachiketa Walhekar, accused of throwing ink on Kejriwal at a press conference in 2013, had approached the Supreme Court to stall its release for including the said footage and “showing him as a convict and Arvind Kejriwal as hero”. The top court dismissed the petition.

It is perhaps fitting that a film about a first-time politician be made by first- time filmmakers. Like their eponymous protagonist, Ranka and Shukla too started off with ideas and ideals minus money and muscle. Like AAP, they too made their project about the people and successfully crowdfunded to finance their film. Before its release, they too had fallen afoul of ‘the system’—in their case, the Indian film censor board.

They had fought. And they had won. The documentary has now been screened at over 50 international film festivals, earning standing ovations and rave reviews. And each time, they have had audience members telling them how much it reminds them of their own country.

Are they happy with their film? “Damn happy,” says Shukla. Ranka lapses into thought. “Me too,” she says, adding what her protagonist would probably be loath to say: “I’m just happy it’s over.”