This is a blunt and hard hitting movie 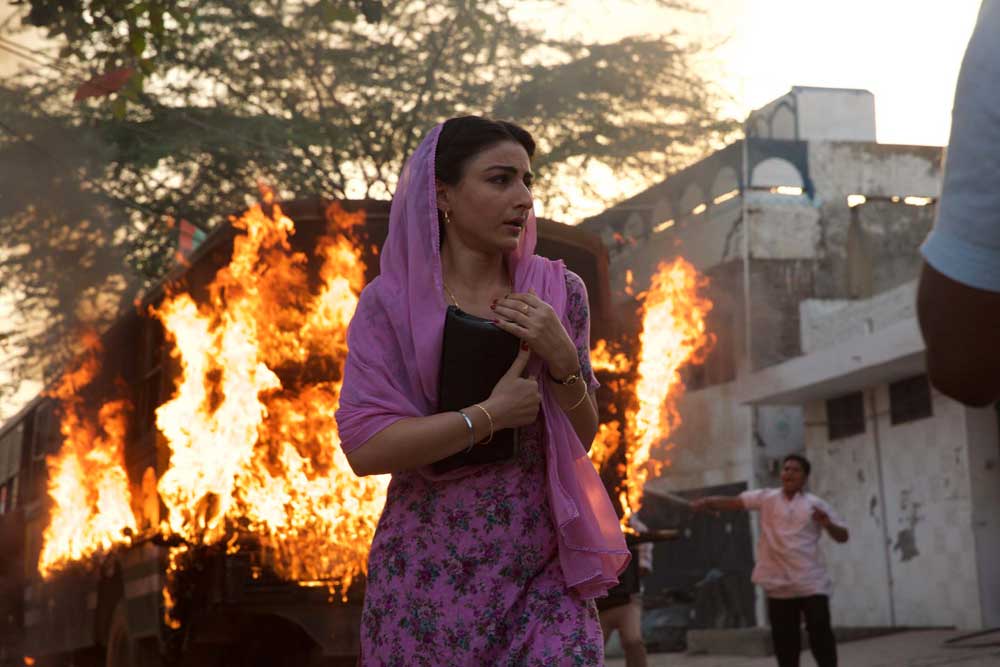 ‘31st October’ is not cinematically fluent, but doesn’t really need to be. So closely does it stay with those 4 horrific days, from the 31st of October, 1984, when Mrs Indira Gandhi was shot dead to the 3rd of November when the killing of Sikhs finally stopped, that it stuns you into silence. A story about how a Sikh family survived those murderous days, thanks to a few brave Hindu friends, you come out of the theatre, 32 years after the event, appalled and shaken to the core – particularly by the knowledge that the instigators and organizers of these murders, all senior members of the ruling Congress Party at that time, have never been convicted.

This movie is effective mainly because it is without frills and has a cut and dry quality. It starts with Mr. Davinder Singh (Vir Das), his wife, Tajinder Kaur (Soha Ali Khan), and their cute little family. Davinder works for the Electricity Department in Delhi. He is well liked in the colony where he lives and is popular at the office too. One morning, while at work, he is surprised to find that the staff is not at their desk. They are huddled around a transistor radio broadcasting the news of the assassination of Mrs. Gandhi by two of her Sikh bodyguards. As he approaches his colleagues, they look up at him and he senses their hostility. Immediately conscious of being singled out because he is Sikh, he is nervous. These people have known him for years, but suddenly, in a matter of minutes, they seem to hold him and his kind personally responsible for the killing of the Prime Minister. He is advised to go home immediately, which he does.

Without an historical context, the alacrity with which people alter their attitude towards a Sikh, might appear melodramatic. But the years preceding 1984 saw almost weekly news of a separatist insurgency in Punjab that claimed the lives of many innocent Hindus, as well as Sikhs. The image of the ordinary Sikh, the friendly man in the turban who was seen all over India as a symbol of decency, enterprise and helpfulness, had begun to change. By the time of the military operation at the Golden Temple at Amritsar, ordered by Mrs.Gandhi in June 1984, the simmering discontent and resentment towards the Sikh community had already reached the surface and the assassination on October 31st was the trigger. The subsequent anti-Sikh riots was aided and abetted by a State that stood by and assisted the pogrom with organization, money and weapons. And this was in New Delhi, the Capital of the Republic.

No matter how well you know the details of the traumatic events of those times, this film is so focussed on looking at the ugliness of the human herd instinct; bands of men with swords and hockey sticks beating up Sikhs, knocking their turbans off, dragging them out of their homes, murdering them, colony after colony, that it makes you despair of your own species. We are given an unrelenting perspective, for almost two hours, on the human being at his primordial worst.

Because the ambience created in the film is so dark, the victims in the movie come off as creatures trapped in a cul-de-sac, without an exit route from their housing colonies. What is so real is the predatory glint in the eyes of the marauding gangs and the fear in the eyes of the prey. With her husband locked in the boot of the ambassador car that has come to rescue their family, Soha Ali Khan plays the terrified passenger, going on an unending drive through the body strewn streets of Delhi, her heart in her mouth. It may well count as one of her finest performances.

This is a blunt and hard hitting movie that makes it clear that justice has not just been delayed, but denied altogether. Which is a depressing and pessimistic thought with which to leave a movie theatre.