The revival of the jamdani weaving tradition 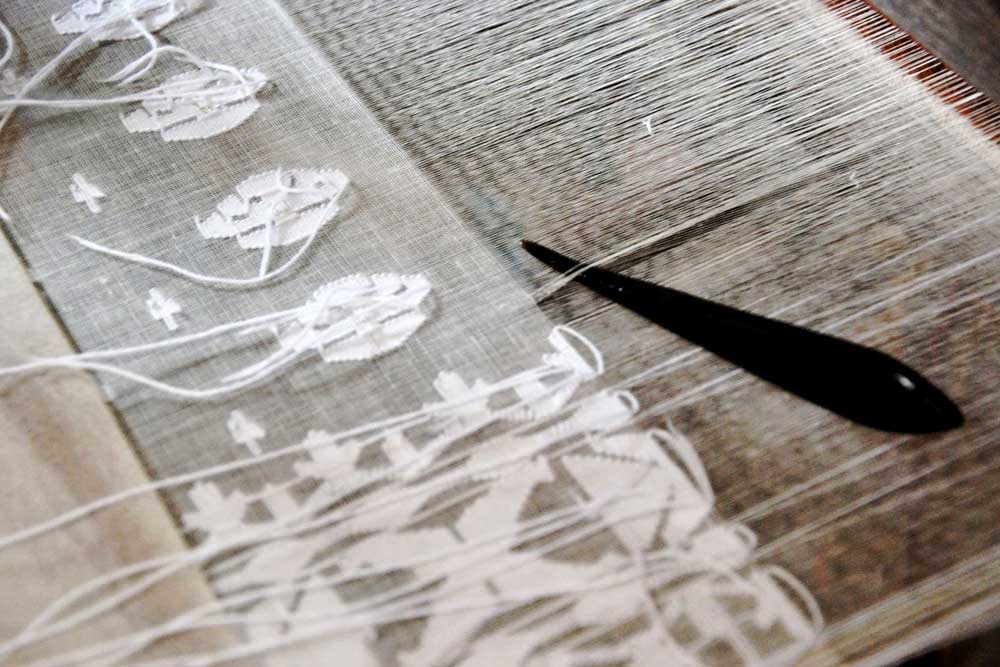 There are untold tales of life on the river banks in India. Carriers of a riverine culture, rains and river banks were fundamental in shaping folklores, myths and legends. Over time, these lives and people became victims of greed, politics, war, violence, migration, urbanization and consequent collective dementia. One such legend is that of the weavers of ‘woven air’ or muslin from the Ganga-Brahmaputra-Meghna river basin.

This December, Delhi Craft Council celebrates its Golden Jubilee year with an exhibition of vintage and contemporary jamdani weaves at Bikaner House, New Delhi. According to Manjari Nirula, member of Delhi Craft Council and Vice-President (WCC-APR), the exhibition, ‘Jamdani Tradition and Technique: An Introduction to the Historical Textile’ intends to create greater awareness of the hand-woven traditions and innovations taking place to meet contemporary market. The exhibition is an ode to Jamdani, the only surviving heir to the muslin tradition.

Described as ‘woven air’ by Roman author Petronius in 1st century CE, the soft and delicate muslin was revered, gifted and worn by Indian royalty since Indus valley civilization. Among the few places that produced fine muslin in undivided India, Machlipatnam (Andhra Pradesh), Jagatsingpur (Odisha), Kendrapada (Odisha)and Dhaka (Undivided Bengal) were renowned for this gossamer, feather-light and translucent cotton weave. The Arni muslin from the city of Machlipatnam (earlier called Masulipatnam, hence perhaps the name ‘muslin’ though many historians accord the name to the city of Mosul in Iraq) travelled to Greece in the time of the Roman statesman and scholar, Pliny (AD 23-79) who lamented over the emptying of the treasury (over 550 million sesterces of gold bullion each year) for ‘venti’ or ‘nebula’ from Indian Gangetic plains.

Though the Arni muslin was a major export of the Indian sub-continent, it was the fine and ethereal muslin from undivided Bengal that caught the imagination of mystics, emperors, nawabs, poets and merchants. Bengali muslin was an important trade commodity in the Muslim world, from the Middle East to Southeast Asia. With the Muslim conquest of Bengal in the 12th century, muslin received exclusive patronage of the Delhi Sultanate, Sultanate of Bengal and later the Mughal Empire. The Mughal Emperor Akbar enamored with the quality fabric, declared muslin made in Dhaka, ‘mulmul khas’ as fit for the emperor and the imperial household. Muslin trade particularly flourished under the rule of Jehangir in the 17th century and went on to occupy the imagination of the Mughal royalty until the decline of the dynasty in the late 18th century.

While the Dhakai muslin found its way into European market through the Arab world, it was the Portuguese who brought muslin or ‘white gold’ to European shores directly through maritime trade route in the 15th century. Woven into silvery hues, from extremely fine yarn by ardent and dexterous hands, the delicate and diaphanous mulmul khas swayed the European courts as easily as it found its way into the Mughal palaces. Marie Antoinette owned over hundred dresses of muslin. One finds mention of muslin in Jane Austen’s Northanger Abbey, written during Regency era when white muslin was au courant. The demand for the prized fabric resulted in thriving settlements of weavers’ communities on the banks of Ganga, Brahmaputra and Meghna. However, the technique of muslin making underwent little change resulting in a shortage of supply against an ever burgeoning demand.

The creation of muslin tested the skill, patience and creativity of all the stakeholders: farmers, dyers, spinners and weavers on the loom. The renowned mulmul khas was made from the cotton plant called Neglecta (known in Bengali as Phuti Karpas), that used to grow abundantly along the mud-lined banks of the Brahamaputra river. The mythical plant could make mulmul khas of thread count of above a thousand. Thread count refers to the number of horizontal (warp) and vertical threads (weft) per square inch: the higher the thread count, the softer the fabric. The mulmul khus needed not only the right fibre but also sharp eyes and nimble fingers of young girls who had to sit in humid conditions with a spindle or takua (often on the river banks or on a moored boat in the early mornings or late afternoon) to wind and prepare the yarn.

The Phuti karpas is extinct today. The East India Company’s systematic destruction of Indian textiles manufacturing and export in favour of Industrial revolution in England, the consequent brutality of British colonial rule on weavers, the devastating Bengal Famines of 1770 and 1943, the demographic shift of weavers communities during Partition and the utter disregard for the ancient tradition resulted in the withering away of many unbroken lineage of masters weavers. If these muslin threads could speak, they would reveal to us more than we care to acknowledge of our past: of wars and human cruelty that ravaged river banks, of greed that destroyed the weaving tradition, of poetry, literature, songs, myths and love that they inspired. Now, we can only imagine the whirring of the spindle on the banks of the river Meghna where once upon a time, mermaids sang on misty mornings and wove the spectral cloth out of thin air.

With the plant and the weaving technique extinct, what is being produced today is called ‘jamdani’, one of the many variations of fine muslin produced before Partition recognised by UNESCO as a ‘Masterpiece of the Oral and Intangible Heritage of Humanity’, jamdani has a cotton-count somewhere between 50 and120. Jamdani weaving uses additional weft threads introduced by hand during the weaving process to create individual designs in the cloth. It was in the Mughal period that jamdani reached unprecedented levels of excellence. Some scholars believe that the technique was introduced from Iran since its name is of Persian origin: ‘jama’ means ‘cloth’ and ‘dana’ means ‘booti’.

Jamdani weaving spread to other parts of northern India, especially to Awadh in what is today Uttar Pradesh with Lucknow, Jais and Tanda as centres of jamdani production. The jamdani tradition also travelled up the Ganges to Benaras where one finds the vibrant Nilambari, Pitambari, Swetambari and the Raktambari weaves. We also find that the jamdani technique in the Upada tradition from Telangana is a somewhat simplified yet elegant form of the Dhakai jamdani.

Today, both India and Bangladesh are trying to revive the muslin weaving tradition. Saiful Islam, CEO of Drik, Bangladesh spent years studying jamdani and muslin tradition in India and Bangladesh. In his publication, Muslin-Our Story, Saiful explains that Jamdani is a surviving variety (the only one out of almost a hundred types) of muslin. Closer home, many designers like Rohit Bal, Rahul Mishra, Sanjay Garg and most recently Gaurang Shah have experimented with muslin in their collection.

The exhibition, ‘Jamdani Tradition and Technique: An Introduction to the Historical Textile’ boasts of exceptional and vintage sarees from Dhaka, angarakhas, lehenga and odhnis from Awadh, elaborate Benaras sarees and exquisite wall hangings in Venkatgiri tradition. The gems of the exhibition however are the two muslin rolls with intricate infographics from Bengal. Archival material such as these are rare since the designs for most jamdani weaves are created in the weaver’s mind whilst on the loom without any aid except memory and sometimes a paper, placed underneath the warp.

The space, designed by Siddhartha Chatterjee, has been kept understated keeping in mind the curated textiles by the Delhi Craft Council team and the linearity and other qualities of the colonial architecture of Bikaner House. Siddhartha shared some thoughts on the design “The technique and skills of the weavers are foregrounded in a kind of directory of jamdani today, stretching eastwards from a loom that is placed at a focal point in the exhibition space. The Southern side displays fine pieces from Andhra Pradesh and Telangana, a Northern corridor displays delicate examples of Tanda weaving from Awadh. These are all, largely, revival stories, against great odds. The recently restored Bikaner House is a remarkable venue for this quiet introduction to the state of this craft today”.

The contemporary pieces on display by veteran like G. Ramaniah and Jyotish Debnath offer proof of hidden embers of ancestral memory that glimmer with extraordinary artisanal skill and endeavor.

The exhibition runs from 12 to 17th December at Bikaner House, Delhi