Returning to the trauma of Partition 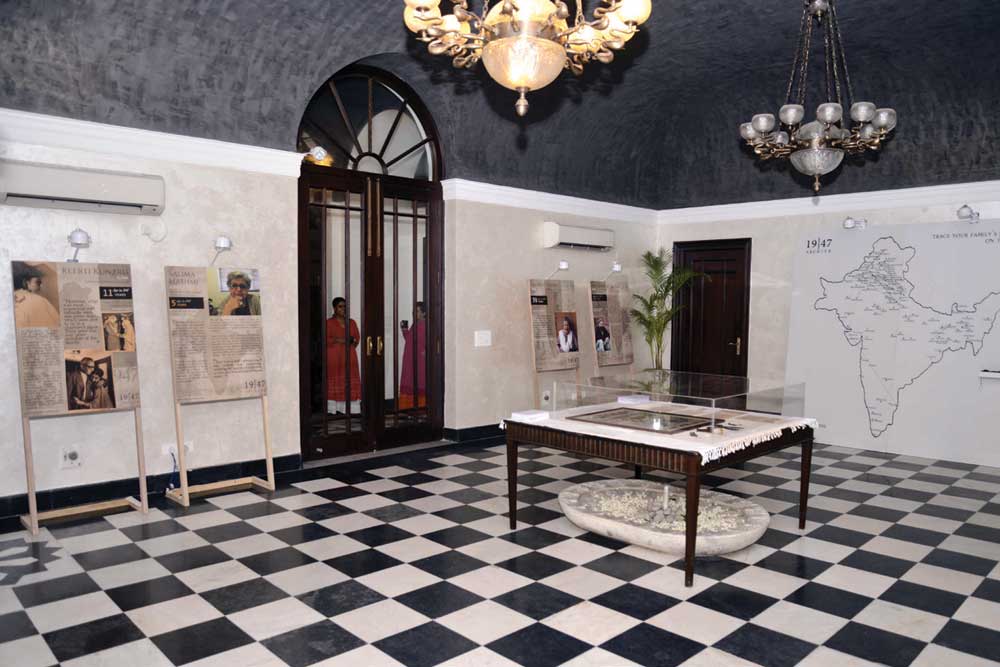 WHAT DOES AN old metallic whistle, yellowed parchments of paper and a pocket knife have in common with smartly designed contemporary khadi outfits? Or for that matter, how are the bucolic landscapes of India captured by photographer Derry Moore and Norman Parkinson connected to the covers of the long-standing academic journal Seminar? The exhibition ‘Shared Legacies’ invites viewers to join the dots and discover the untold story of Partition, captured through these multiple exhibits at Delhi’s Bikaner House.

Bikaner House and the 1947 Partition Archive have teamed up for a multi- media interactive exhibition on the ‘people’s history’ of Partition that opened on August 9th and continues till the 24th. “Everyone knows the story of the Nation States, the story of politics and what happened to the land. But little is known about what it meant to live through Partition. That is what this exhibition is about. The people’s history,” notes Priya Pall, director of Bikaner House.

The whistle, displayed in a vitrine in the centre of the lounge room at Bikaner House, belonged to the night officer Nand Kishore Nijhawan. He was part of the British Army before Partition, and when he fled Pakistan, the whistle was all he could carry with him on his migration to India. In the same vitrine, one sees a cutting from Daily Milap, an Urdu newspaper, loaned to the Partition Archive by the publication, which features the first page of its special edition on Frontier Gandhi and the Mahatma.

The cutting sits next to the pocket knife that belonged to a lady named Bhag Malhotra. She carried the ivory-handle knife from Lahore to protect herself from riots in Dera Ismail Khan. The label tells us that she ‘ritualistically and unknowingly’ travelled with it from Lahore to Delhi and then later Meerut in 1947. In hindsight, the artefact acquires a touching aura given that such a delicate knife would perhaps be used for cutting fruit at most. Yet, it served as a protective talisman during her migration.

The yellowed parchments in the vitrine speak of the loss of material values of a household. It documents the flight of a gentleman, Indra Prakash Popli, who was born in Ahmed Pur Sirkia of district Bahawalpur in Multan, and migrated to Delhi in 1947, leaving his job in the Railways. He received compensation from the Ministry of Rehabilitation only in 1958, almost 11 years later. There were several people like him, some of whom never received any recompense.

This collection of objects throws light on what it meant to be a refugee and builds a micro-history of narratives that most of us have not heard. “The idea behind the Partition Archive, which started in 2009, is to document the oral and archival history of Partition. We currently have the largest archive, of 4,300 oral stories, which brings to the public many of these untold stories,” says Ritika Popoli, development assistant of the 1940 archive. “We hope that it will travel to various parts of the country and even abroad,” she adds.

The exhibition space around the vitrine is dotted by standees bearing quotes and photographs of both famous and common people, speaking about their experience of Partition. From late author Khushwant Singh and Olympic athlete Milkha Singh to author and artist Salima Hashmi, the daughter of Faiz Ahmed Faiz, and Shobha Nehru, who had seen both Partition and the Holocaust in Germany. There are also stories of common folk, like Basheer Ahmed who fled his ancestral village in Garhshankar tehsil in the Hoshiarpur district of Punjab.

A quick glance around the hall vivifies the trauma of Partition. Some stories are more disturbing than others. For instance, on the one hand, Khushwant Singh was offered the post of a high court judge by Muhammad Ali Jinnah if he stayed on in Lahore in Pakistan. He, however, chose to drive down the empty road to New Delhi. “After Partition, I returned to Lahore many times. I had no venom against anyone,” said Singh in an interview recorded by ‘citizen historian’ MS Sandhu for the Partition Archive. On the other hand is a story like Basheer Ahmed’s: “We didn’t know that the price we would pay for our freedom would be bloodshed and violence and us having to leave our ancestral village… in the process, we got caught in the riots and my father was killed.”

In what seems like a mood shift, we are greeted by cheerful mannequins wearing khadi apparel, curated by fashion designer Prasad Bidapa, in the Durbar Room. It brings a contemporary reading to the ‘fabric of freedom’, as a tribute to Martand Singh, the well-known designer and textile expert who was instrumental in the creation of Pragati Maidan in the 1970s. Martand, who was affectionately known as Mapu, brought his multilayered and multicultural understanding of India to his approach to fashion, weaving and textiles. Bidapa’s nod to Mapu’s work comes in the shape of silhouetted and hugging apparel made of khadi that underscores the elegance and versatility of the fabric which was woven into the language and politics of India’s freedom struggle.

In another room, we are acquainted with a set of photographs curated by Pall, which tells us the story of another India where British photographers like Derry Moore and Norman Parkinson looked at the country through foreign eyes. The exotic landscape photographs, the large sprawling villas and palaces, and images of royalty belie nostalgia for the British Raj. Moore and Parkinson showed the world how beautiful India was at the time, since their reality was shuddering from the aftermath of World War II. “If you extend this to the larger exhibition, Partition was just a blip on the map for the foreign eye, in contrast to the immediacy of Partition for those living in India and Pakistan,” observes Pall.

At the same time, photographer Raghu Rai’s image of architect Raj Rewal’s Hall of Nations at Pragati Maidan almost insists that India is moving towards modernity, and is not the sleepy or bucolic vision presented by Moore or Parkinson. The images of the Hall of Nations also acquire a poignant quality now that the iconic building has been demolished on government orders. TS Satyan (or Tamabarahalli Subramanya Satyanarayana Iyer) was known as the father of Indian photojournalism. Satyan was born in Mysore in 1923 and passed away in 2009. His vision moves from approaching his subject as an arts photographer to becoming a photojournalist. The images we encounter lean towards the former.

In another part of the building, the covers of Seminar indicate that some problems of times past persist even today. Issues of colonialism, women’s rights and other minority rights jump out at the viewer, while the typography used in the journal covers stand out as a form of art in itself.

Another section, curated by Gayatri Sinha, features video installations by contemporary artists like Shilpa Gupta, Sonia Khurana, Atul Bhalla, BV Suresh, Anita Dube and Amar Kanwar. The videos speak tangentially or directly to Partition. An instance of the first would be Bhalla’s Mashk (2006), which is a close study of the artist slaughtering a goat and cutting off its trotters. The ‘sacrificial goat’ then becomes symbolic of lives sacrificed for the country, nation and freedom. Sonia Khurana’s The World (2004) speaks directly of Partition, through the narrative of an old woman who speaks of burning rooftops during the riots. Khurana has juxtaposed the voice of the woman with shots of fading city lights, of herself walking in an open field with snatches of poetry that comment on the ‘world being her home’.

An interactive aspect of the exhibition that was initially meant for children but had mostly grown-ups participating, is an almost 10-foot Migration Map of India. People are provided with black strings to trace their migration route. This has been curated by Aanchal Malhotra, and it has had many visitors, including Yogesh Munjal of Hero Cycles, whose father and uncle co-founded the company and added his family’s migration route. Tellingly, most of the migration was concentrated in north India.

A selection of films, curated by Professor Ira Bhaskar of Jawaharlal Nehru University, bestows a filmic expression upon the ensemble. It features movies like 1942: A Love Story, 1947 Earth, Tamas (I and II) and Garam Hawa, alongside regional eternals like Chitra Nodir Pare and Subarnarekha, besides recent ones such as Khamosh Pani and Pinjar.

This comprehensive, immersive exhibition covers various aspects of the freedom movement and Partition. It must not be missed.

(‘Shared Legacies: 70 years of a Nation’ is on at Bikaner House till August 24th)