The Inward Gaze of Olivia Fraser

An artist with an eye for detail 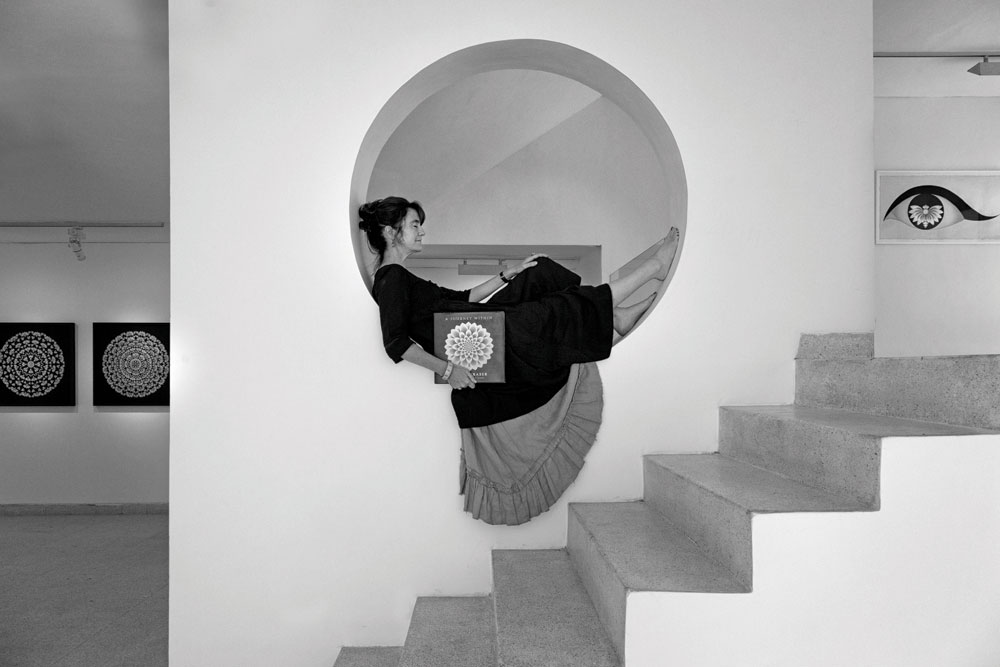 
THE HUMBLE BEE is the presiding genius of Olivia Fraser’s new show, Amrit, at Nature Morte gallery in New Delhi. It is ubiquitous, by itself or appearing in vivid formations, hovering around lotuses filled with amrit (the nectar of immortality) that glow with a gem-like luminosity. The coupling of the flower with the arthropod not only pays homage to the natural order of things but it also revives a trope that has recurred in the artist’s work over the years.

“For this show, I moved on from the lotus to the bee, a motif in ancient and modern poetry that is also vitally present in the iconography of Buddhist and Hindu art,” Fraser says. Beautiful women in Sanskrit poetry are often trailed by a cloud of bees because they are irresistibly desirous. The insect is invoked in another context in the Gheranda Samhita, an early 18th century treatise on yoga, composed in Sanskrit.

Writing on Fraser’s studies of the lotus, Robert Macfarlane quotes the passage below, invoking the intermingling of flora and fauna as a visualisation technique: ‘The yogi should visualise a sublime ocean of nectar in his heart, with an island of jewels in its middle whose sand is made of gemstones,’ the Gheranda Samhita says. ‘In every direction there are kadamba trees with abundant flowers… where the scents of malati, mallika, jati and sthalapadma flowers perfume every quarter… Bees and cuckoos buzz and call there.’ It is to this wondrous land of heady fragrance and dulcet hum that Fraser transports us in her work.

In 1989, when she visited India for the first time, the country filled her with a sense of wonder too. Her future husband, the historian William Dalrymple, had got a job in Delhi and instead of going to the Chelsea College of Arts in London, Fraser joined him. “It was both exciting and terrifying, a step into the unknown,” she says. “But it was also the best decision ever.”
Both India and the arts entered Fraser’s life early on. ‘I first came to India… clasping a newly published book called The Passionate Quest,’ she writes in A Journey Within, a book on her life and work that has been just published by HarperCollins India (Rs 2,999; 208 pages). ‘It was a glossy, hardback coffee-table book written by Mildred Archer and Toby Falk about the art and adventures of my Scottish kinsmen, James and William Fraser, in India from 1801 to 1835.’ 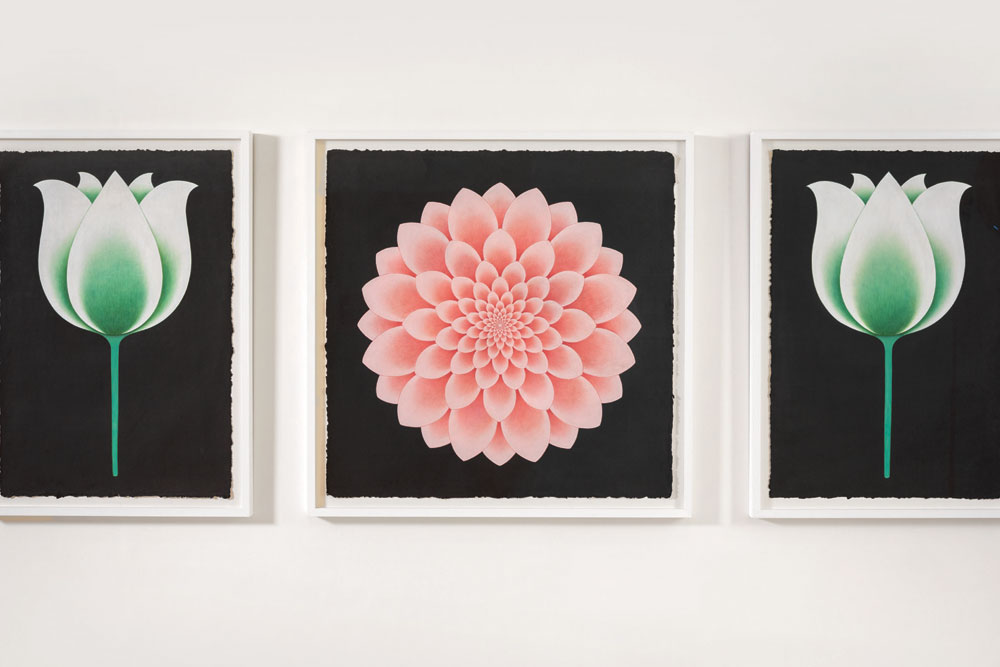 James was an artist, who made lithographs and engravings, documenting the architectural glory of Calcutta and the beauty of the Himalayan region. Together with his brother William, who was the British resident representing the East India Company in Delhi, James commissioned a series of watercolours from local artists, capturing the subcontinent’s diversity. Part of the ‘Fraser Album’, these paintings in the hybrid style of the Company School, would fascinate and inspire another Fraser as she stepped upon Indian soil a century and a half after the brothers had left.

OLIVIA FRASER’S encounter with India, mediated as much by the legacies of the Company School as by her affinity with traveller-artists like Henri Rousseau and Paul Gauguin, set her on a path she hadn’t anticipated. In the beginning, she went out sketching every day in Delhi, using the book by Archer and Falk as her guide. She began to make watercolours of scenes around her. Streets teeming with strange faces and attires, the heat and dust of urban life, the texture and temperature of the tropical sunlight distinctly different from the one she had known in England: a range of these early works are reproduced as thumbnails at the end of A Journey Within.

Even in their small format, these skilful paintings capture intimate details. The viewer’s eye is drawn to creases and folds in the clothes of the subjects, the precise expressions of mirth or fatigue on their faces, and the impeccable symmetry in which their bodies are arranged. But it wasn’t until she saw miniature paintings at Delhi’s National Museum that Fraser found the vocabulary that led her to forge a distinctive visual language.

“I love tiny things,” Fraser says, “And I love patterning.” It was inevitable that she would gravitate towards the miniature form and embark on her experiments of bringing what she calls her “Western, foreigner’s perspective” to bear upon its intricate energies. “I was seeing it from the outside and moving in,” she says. “That’s why I describe my process as a journey within.” While traditional miniature painting is replete with kings and deities, Fraser peopled her adaptations with ordinary men and women from India’s streets. She captured the easy camaraderie of taxi drivers playing cards, the relaxed gait of women carrying baskets on their heads, and, of course, the many monuments and minarets strewn across Delhi.

But it wasn’t until Fraser came to live in India again with her young family in 2005 that she decided to take her affinity for the miniature form a step further. Unlike her younger self, she couldn’t indulge her life of an itinerant artist, now that she was the mother of three children. So she began to explore the possibility of making miniature paintings the traditional way. ‘I apprenticed myself to a miniature painting workshop in Jaipur,’ Fraser writes in A Journey Within. ‘I would spend hours watching and listening to the master painter, Ajay Sharma, as he managed to make his studio materials a microcosm of the world outside…’

Learning the miniature style didn’t merely involve a mastery over technique. It was rather a training in unlearning the certainties that a contemporary artist usually takes for granted. Instead of squeezing paint out of a package bought from a store, Fraser had to create colours, drawn from the palette of nature that surrounded her. Pigments had to be extracted from petals and plants, the earth was pounded to derive the subtlest of shades, and gemstones were crushed to produce hues of indescribable richness.

“One of my teacher’s lessons included the art of catching squirrels to make brushes,” Fraser says. She learned to trap the animal gently with a pillow-case, pluck a few strands of hair from its tail, before releasing it again, unharmed. The squirrel-hair brush is essential to executing the elegant lines and flowing curves of miniature paintings—“it is intrinsic to the springy nature of the style,” as Fraser puts it. Before long, she was also making wasli, the handmade paper that is specifically used by miniaturists.

Harnessing the materiality of the medium, however, was akin to dipping one’s toe into the still surface of a pool. To plunge into the oceanic depths of the form required immersing the mind and body in the lived realities of the past and the present, to train the eye to look beyond the immediate and the obvious.

In contrast to the oaks and elms that Fraser had grown up seeing in England, trees like mango and kadamba abounded in her life in India. Painting the latter in her newfound style was different from the academic life studies Fraser had practised during the year she spent at Wimbledon Art College after a degree in Modern Languages from Oxford. The miniaturist, as she realised, wasn’t just interested in painting from life; he wanted to get to the essence of things instead. In the end, the process was similar to learning a new language; only, instead of picking her way around the rules of speech, Fraser had to navigate the unspoken idiom of the arts.

Over the last decade and a half, Fraser’s visual universe has included the icon of Srinathji, Lord Krishna’s eighth incarnation, motifs arranged in grids after the manner of Andy Warhol’s pop art, and dizzying patterns that recall the op art of Bridget Riley. Her eclectic sensibility is forged as much from the spiritual truths distilled into the pichwai tradition as by the cerebral abstraction of Mark Rothko and Anish Kapoor.

The effect of Fraser’s unique style is amplified by her ingenious manipulation of scale. Worlds of sensation are compressed into her lotuses, while an expansive energy emanates from her cosmic visions of the sun and the moon. If the planetary bodies seem to whirr, the petals of lotus explode into a burst of colours. But to perceive the beauty of these inflections, the senses have to be awakened to a heightened reality. In A Journey Within, art historian BN Goswamy writes that he is reminded of these lines of Urdu poet Josh Mahilabadi, as he reflects on Fraser’s approach: ‘So close am I to nature that when the bud opened and made that chatak sound, I bent my head low and asked, “Was it me that you were speaking to?’’’

The art of paying attention to the minuscule as well as to the immense is key to Fraser’s art. A practitioner of yoga and a trained Bharatanatyam dancer, meditation and visualisation are central to her practice. The coexistence of these forces creates a special harmony in her style, which straddles both figuration and abstraction. Her journey, which began as a secular painter of bodies and buildings in modern spaces, entered the realm of the mystical with her investment in the pichwais of Nathdwara and miniature art of Mewar and Jaipur. Over the years, the naturalistic settings have morphed into a singular focus on lotuses, which, in turn, have shed their petals and drawn in swarms of bees, all arranged into delicate patterns along a living axis of spirituality.

But it is perhaps in her many compositions featuring eyes—either in pairs or in clusters—that the most potent messages of Fraser’s art are conveyed. The Darshan series, for instance, plays on the deeper meaning of the Hindu concept of beholding a holy person or deity. In one of the many paintings of this series, a set of large eyes look out at the viewer, as a tilak hovers above them. Faces of deities remain lodged within the irises. In another work, several smaller eyes float in space, their pupils having turned into golden lotuses. The object of adoration and worship is internalised, the beholder and the beheld become one, instead of the latter being passively observed by the former. The act of looking at Fraser’s paintings also demands a similar arousal of the viewer’s inward gaze. The image mustn’t dwell on the eye alone but must seep through them into the recesses of the mind, stirring a welter of emotions. As the Gheranda Samhita urges the yogi: ‘On hearing the sound of a bee from within, lead the mind there.’