×
Art & Culture | Inside the Studio

Ravinder Reddy: The Man with the Heads

Having made over 100 fibreglass figures in the past 30 years, Ravinder Reddy continues to be interested in the human form and its ability to arrest attention 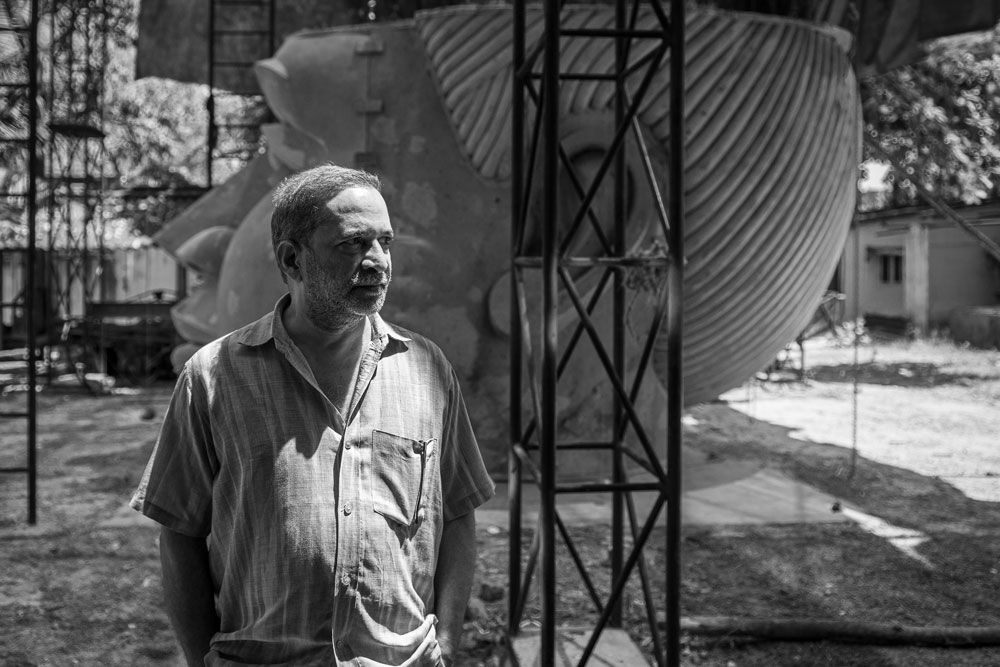 
G. Ravinder Reddy is working on his biggest sculpture yet: a 24-foot head that is being assembled in a shed built for the purpose on his two-acre property in Visakhapatnam. A burly man clambers up the ladder propped against a cheek to work on one of the joints holding the six pieces together. A Telugu film song plays on a tinny speaker, barely audible above the tinkering in the yard in front of the studio. A cleaning cloth suspended from the left nostril flutters ludicrously. The cranium and the neck, yet to be fixed, soak in the sun like a macabre forensic puzzle. Eventually, a bun will be attached to the back of the head and a bag placed atop it, Reddy says, “to symbolise migration, displacement, mobility”. Now that the piece, in the works for many summers, may finally find a home at the Bengaluru airport, Reddy wants to use it to interrogate the praxis of urban life and to call attention to the sociocultural identity of the outsiders who build our cities, the people we technically see every day but don’t quite register. “We are all visitors journeying somewhere. If an immense sculpture could make city-hoppers pause for a moment to think about the village woman with dreams and a packed lunch atop her head, then my job is done,” he says.

Having made over 100 fibreglass heads in the past 30 years, Reddy, 64, continues to be interested in the human form and its ability to arrest attention. “Any figurative sculpture in a public space needs to fulfill two conditions: it should have the scale to make you stop and look, and the life force to make you think of the story behind the form,” he says. “Whether you think of my figures as individuals with personalities, goddesses, or sociological metaphors, it does not matter. I am constantly learning from how people engage with my works. When I paint a head blue, for instance, I may be referencing Krishna but some viewers choose to see in it Dravidian identity and the changing ideals of beauty.”

Reddy’s figures have become objects of worship—a family acquired one some years ago to install in their puja room—and commentaries on the overlapping cultural realities of modern life. They have been described as portraits of the late politician J Jayalalithaa, whose rounded cheeks and chignon live on in thousands of posters and busts dotting Tamil country. “I am not an activist; I am not consumed by immediate sociopolitical issues. I want my work to have a timeless relevance,” says Reddy, dragging a couple of plastic chairs to sit next to a series of red heads that he has cast in bronze upon the client’s request. When he started working with fibreglass in the 1980s as a student of sculpture at the Faculty of Fine Arts, Maharaja Sayajirao University, Vadodara, he was advised to stick to conventional materials—marble and bronze. “I found them to be overbearing. They were beautiful in themselves, so much so that if the form wasn’t strong enough, it was rendered entirely superfluous. Besides, bronze casting was expensive and time-consuming, and I didn’t have the skill to chisel a fine sculpture out of stone.” Reddy was basically a modeller who enjoyed the dynamism of clay. “I wanted to work with both hands, to spread them as wide as possible,” he says, his shirt open at the neck, feet slipped loosely into dusty sandals. “In the fine art world, sculpture was considered blue collar work. You needed to work long and hard and you needed to acquire material expertise.” Most sculptures today are cast in fibreglass but when Reddy was an emerging artist, the plasticky surface was not considered worthy of a collectible or a public work of art. “When I painted my heads a bright red or blue, people called it kitsch, forgetting that kitsch is a European concept. We in India have always lived with bold colours.”

Live models, usually women who work at his house or studio or live in the neighbourhood, are crucial to his creative process. Kanaka, his model for the first three to four years since he moved to Visakhapatnam to teach at the Department of Fine Arts, Andhra University, probably shaped his aesthetic of the full, intense face, which he has since stylised. “When I visited Bombay on weekends from Vadodara, I modelled from memory Parsi women on their way to work. Since then, I have relied on live models, although they are not easy to find. It is important for me that the society I live in finds my work relatable. Even if I am not making a true portrait, I want it to reflect my immediate geography so that people around me find something familiar about it—maybe the smile, or the hair,” Reddy says. His canvas then is not blank and spectral, stripped of culture and vanity, but a living, breathing person. The eventual work may not be a transparent microcosm of her world, but it does refract reality in ways that make you dream up character trajectories, imagine inner journeys and struggles.

Further fleshed out in the motifs she wears in her hair and her ears—involute knots, strands of jasmine and roses, golden adornments—she seems to kindle contemporary ideas about female subjectivity and autonomy, class, sexuality, power and status.
Reddy remembers a show in the ’90s at Victoria Terminus, Mumbai, where his reclining nude was considered inappropriate by organisers who put it up on display at the Times of India building instead, only to have it moved to the platform upon popular demand. “If there is one thing I have learned as an artist, it is to let go of preconceived notions about what is culturally acceptable and what isn’t. I was pleasantly surprised when my mother posed next to one of my nudes for a picture,” Reddy says.


I am not an activist. I am not consumed by immediate sociopolitical issues. I want my work to have a timeless relevance

Born in Suryapet, Telangana, and raised in Hyderabad, Reddy does not speak the coastal Andhra dialect despite having lived here for nearly three decades, making him the butt of jokes at the studio. Set amidst mango and almond trees, the space houses a vast hangar where workers are bent over several heads applying plaster and primer; airy, contiguous halls where four finished works currently stand swathed in plastic; smaller rooms with books, materials and older relief figures gathering dust; and his residence out back. In a dusty room, Reddy’s newest modelling project stands wrapped in a cloth. A lady’s pink purse lies on a table next to it. “She didn’t turn up today,” he says, shrugging.

My tour comes to an end in front of a large head titled Woman with 1,000 phalluses. She wears hundreds of golden bullets and as many blue pills in her hair. Pink hearts are studded into a band of green that runs across the back of her head. “It is the first time I have used pastel colours,” Reddy says. Her earrings, discs of gold that he cast using an idli plate, are split down the middle by three bullets. If bullets are symbols of man’s power and machismo, then imagine the strength of a woman who casually wears a thousand bullets in her hair, Reddy’s smile seems to say. Except he is not the sort of artist who tells you what to think. “Is it necessary that every figure should tell a story? Isn’t it enough that it exists in the universal drama, impervious to our expectations? Sometimes we overthink.”