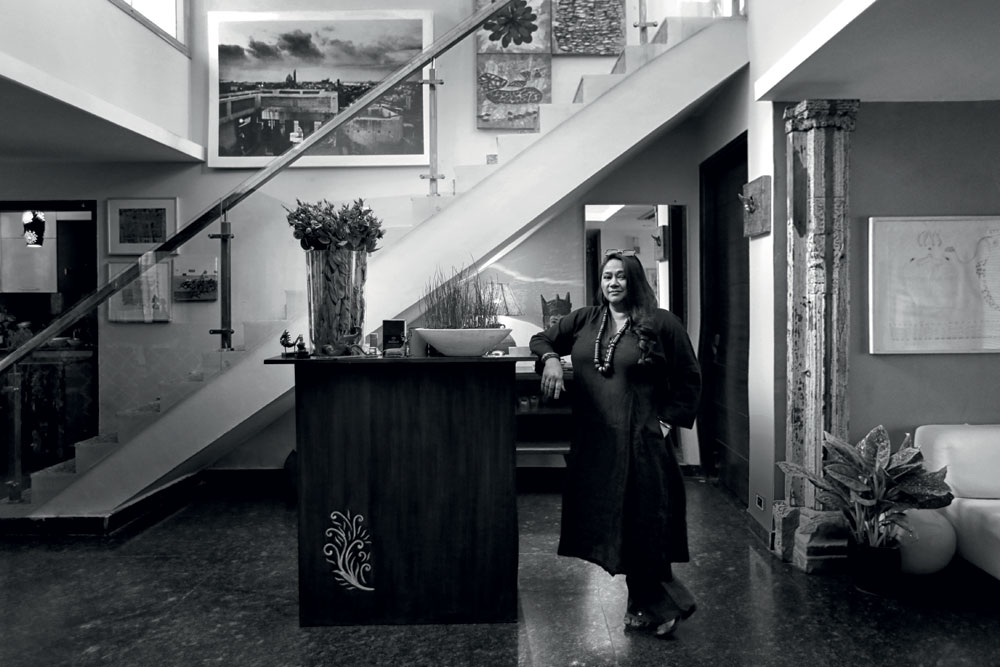 
A TWO-MINUTE TRAILER of a documentary titled Sama, in some ways, captures the role of a curator and the spirit of Myna Mukherjee. Directed by filmmaker Onir, and made in collaboration with Davide Quadrio, the trailer brings together different glimpses of the arts, culture and landscapes of India and Italy. If one shot shows block-printing in India, the next shows the gilded ceilings of an Italian mansion. If one shot shows Italian ceramics, the next takes a viewer into the studio of a potter making statues of goddesses. The role of the curator is to bring out these hidden resonances between not just art works, but also artists and art worlds. As a “cultural producer and curator,” Mukherjee is both the tangible and metaphoric bridge between different practices and cultures.

Curators are the unacknowledged rock stars of the art world. They combine art with glamour; they bring celebrities and conversations to museums, biennales and exhibitions, while at the same time acting as powerful agents who situate the arts right at the centre of community life. Mukherjee is fast becoming one of the more important curators, who is taking India to the global stage, and she’s doing this across cinema, arts, crafts and even technology.

Mukherjee curated two collateral events at the recently concluded India Art Fair 2022. The art and technology show she created at the India Habitat Centre, Delhi, titled Techne Disruptors used Artificial Intelligence and featured some of the most cutting-edge, digital artists such as Harshit Agrawal, Seema Kohli, Adil B Khan etc. It was a fascinating show that looked at themes from the war in Ukraine to advertising to the return of two Benin Bronzes to Nigeria by The Metropolitan Museum of Art, New York.

Speaking about Techne Disruptors, Mukherjee says, “I’ve walked away from a million projects, but I believe in this technology project. I think it’s an exciting space. I like talking about it. I like think­ing about technology and how it’s been changed and how it can disrupt. So even though I don’t think that this is a gallery show—I don’t think a gallery would really put its money into it—I feel after they see the show, they would.”

As part of this show, there was also an auction of Raghava KK’s NFT work 3D Cyborg Desires. Raghava trained a machine, with the help of engineers, to experience the most intimate of human experiences (an orgasm as experienced by a male, a female, and a couple). The machine’s recreation of the orgasm is gorgeous and funny in equal parts, with images of Pacman, Mario Brothers, and other childhood pleasures mixing with blooming flowers. Raghava made waves last year when his AI work La petite mort (from The Orgasm Project) sold at an estimated USD94,500 at Sotheby’s.

Mukherjee was right to trust her instincts. More than half of Techne Disruptors was bought by a well-known museum for their collection.

Another show, curated by Mukher­jee, and running at the Italian Embassy Cultural Centre, Delhi, until May 31, is titled Vita Nova 2022: A New Life. Curated with Davide Quadrio, director of the Mao Museo d’Arte Orientale in Turin, it premiered at the Jaipur Literature Festi­val 2022. In Delhi, the same six artists— Andrea Anastasio, Francesco Simeti, Marta Roberti, Puneet Kaushik, Raghava KK, and Shilo Shiv Suleman—are being shown, but there are fewer artworks.


I’ve been lucky to be in the right place at the right time and that is probably because of my Wall Street years where I worked with ups and downs. More than intuition, it’s belief. If something is of importance to me, I can persuade sponsors that it’s of importance to them as well, says Myna Mukherjee, curator

Like all of Mukherjee’s work, Vita Nova questions binaries like ‘global south’ and ‘global north’, it interrogates ‘high art’ and the role of craft that retains its historical and cultural significance even as craftsmen face an evolutionary shift to the ‘contemporary’ for their own survival. All six artists worked with craftsmen in a range of handmade techniques—such as woodcuts, block prints, embroidery, bidri, ceramics, clay—and developed contemporary ideas. The artworks range from the massive to the miniature; Shilo Shiv Suleman’s huge metal tree breathes electronically when someone blows into the bellows; while Puneet Kaushik’s labour-intensive tiny blue pottery plates display half-human fantastical figures.

The contemporary hybridised artworks come together to raise a host of issues not least of which is the continuing fragility of craft communities in contrast to the privilege of artists and collectors working with ‘high art’, and the flows of production and consumption under global capitalism that has, over centuries, created hierarchies between arts and crafts. The show also looks at craft within the conditions of extreme material and economic disparity. It focusses on labour and materiality in contemporary art and practice. It examines the political dimen­sions of craft and power and the use of science and technology to bolster craft.

TEXTILE ARTIST PUNEET Kaushik says, “I’ve known her from her first show at Engendered (Mukherjee’s gallery and organisation in Shahpur Jat that’s dedicated to gender, sexuality, and minority rights) in Delhi called Resist, which was held after the six men gang-raped a physiotherapy intern in Delhi in 2012. I created a model installa­tion of a piece of meat dressed up in an expensive dress and this was installed next to an altar. We called it Either You Treat Me Like A Piece of Meat Or You Treat Me Like A Goddess. It’s been a beautiful journey with her. She’s one of the few people who used the knowledge she gained from being born in India and living in the west before coming back to India.” He adds, “The good part about Mukherjee is that she uses her educa­tion to take eastern core concepts and challenge the west. She’s built music, art, and institutes. She’s always open to experimenting.”

For Resist, Mukherjee, who calls her­self a “cultural producer and curator,” brought together 17 artists, four bands, and five fashion designers to protest against gender-based violence. The show was extraordinary in its vision, with girls dressed up as live installation models and a tightrope walker showing the tightrope women navigate daily. She says, “Art means patrons. Sometimes I find the money and sometimes, I’ll pro­duce. I’m a cultural producer. Because I believe that this is something worth­while and there will be a market for it, or there will be an audience for it, or this would be meaningful in the future.”

Mukherjee is also the force behind Rock for Rights, which is a music concert in solidarity with gender and minority rights movements in south Asia. Like a true entrepreneur, she has many feathers in her cap, from running an Odissi dance company in New York to starting Engendered. 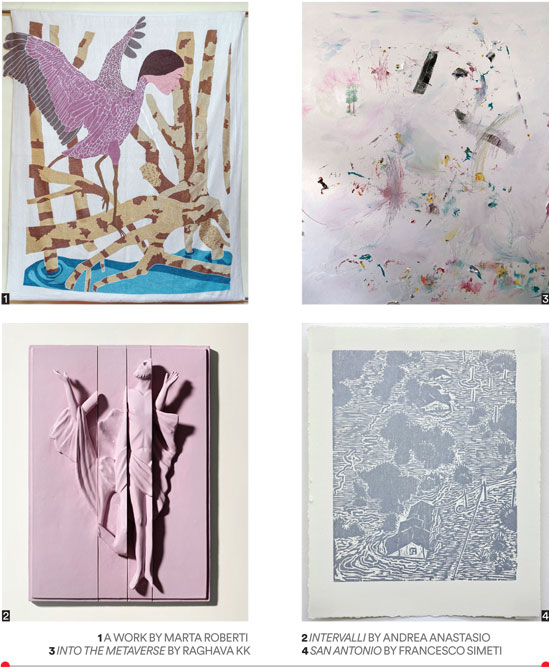 She says, “I was very tired of the way south Asians were represented in the US and I love New York but, but I think that like all other countries, the diaspora in the states has had their own frustrations including stereotypes, not finding their representations around. And so, I strug­gled with that for many years and I’m pushing mainstream a lot. The idea was to push for representation that was not unidimensional. We’re complex people. I like that complexity. I thought art is a great way to show this.”

BORN TO AN Army Officer, Mukherjee spent her childhood moving to small towns across India and finally studied Economics in Punjab before she left for Carnegie Mellon Uni­versity, US, where she did her Masters in Policy and Management. She worked on Wall Street including with KPMG before she chose to take her leadership experience to the arts. It helped that the director, Mira Nair was a neighbour and mentor, and Mukherjee had always been a part of south Asian-focused or­ganisations, right from her college days. Many conversations around the iconic film Sita Sings the Blues happened in her living room and she was a promotional partner on its release. She and Engen­dered were also the distribution and premier partners for North America for Just Another Love Story by Rituparno Ghosh and I Am by Onir.

“I’ve been lucky to be in the right place at the right time and that is probably because of my Wall Street years where I worked with ups and downs. More than intuition, it’s belief. If something is of importance to me, I can persuade sponsors that it’s of importance to them as well. And most of the time it is true. It’s just about being able to connect the dots and I’m good at being able to connect the dots.”

She’s also been a producer and programming consultant for multi­ple embassies in Delhi, including the American Centre, British Council and the High Commission of Canada. These projects bring much-needed money and attention to local artists.

But, perhaps, the most ambitious work she’s done was an exhibition called Hub India at Artissima 2021, the international fair of contemporary art in Torino. There were three parts to Hub India—Maximum Minimum, which set out to offer an overview of the galler­ies, institutions, and artists active in India; Classical Radical, which featured contemporary and modern art from the Indian subcontinent and the premiere of the film Sama. In all, the show fea­tured over 65 artists from India’s leading contemporary galleries and museums and heralded a significant conversation between contemporary art from India and the global art world.

“The source of Myna’s manic energy comes from the fact that she is an eternal outsider,” says Biraj Patnaik, executive director, National Founda­tion of India. “Not just in the sense of one who does not belong, but more as one who has no desire to belong. This has allowed her to cross the curatorial boundaries that she had set out for herself when she started Engendered, which was then perhaps India’s first gal­lery focussing on LGBTQI themes and artists. Since then, she has expanded her oeuvre effortlessly to performance art, video installations, working with artists and museums globally.” He adds, “In­tersectionality still remains at the core of her practice with sexuality as one of the multiple themes that her curations explore. Myna has with fortitude and chutzpah kept up with these seismic shifts in India’s socio-political space.”

Mukherjee was also in the news as the curator of The Wall, a performa­tive artwork at the India Art Fair, 2020, where the police, acting on an anony­mous complaint, arrived to remove the works because one used an Urdu couplet. But that harassment has not bothered her.

She says, “There’s a quote that has always stayed with me, that as a woman, I always have to apologise for any amount of power that I have—whether it’s little, whether it’s more, and that’s been true everywhere I’ve been—from Wall Street to Broadway to even the car­penter in my house. Women in power have very complicated relationships with power. We talk about rights now, but power is a very untrusted word and it’s important to talk about power for women, especially in representational politics.” Mukherjee has become one of those voices that uses her power to carry a modern, complex India to the world.

(Vita Nova: A New Life, curated by Myna Mukherjee, runs at the Italian Embassy Cultural Centre, Delhi till May 31)