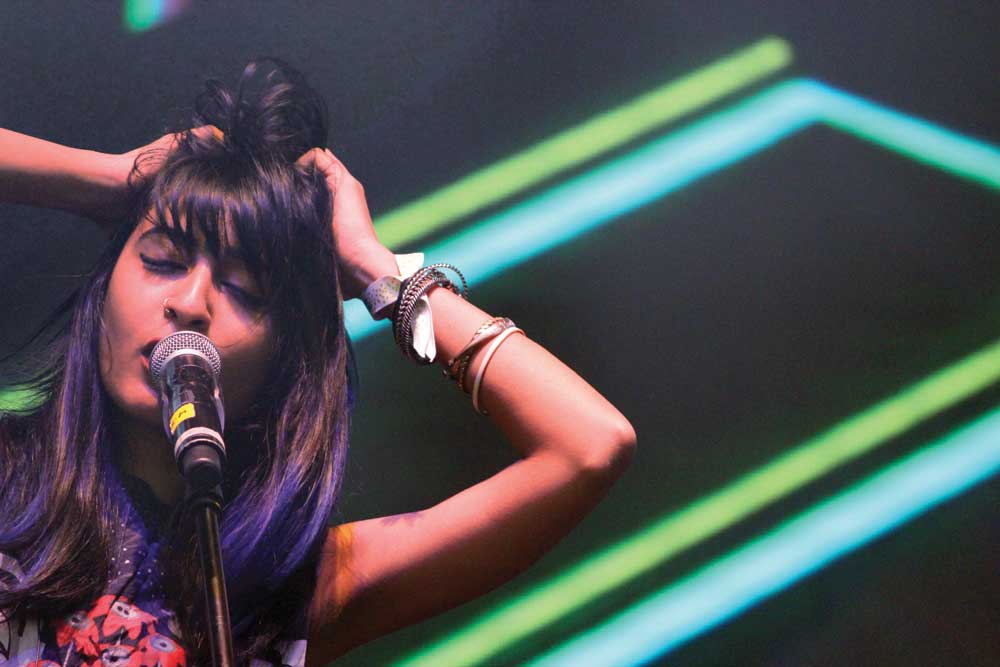 Is Suyasha Sengupta cool? She worries sometimes. “I’m like, ‘Yeah, I’m this really cool chick and all.’ But at the end of the day, honestly, I don’t put my money where my mouth is,” she says. This little journey of self-introspection finds its way on Money Where My Mouth Is, a song from her new eight-song album, Songs About Lovers, which she put out on 14th February under the name Plastic Parvati. On another song, a “cheeky song”, she tries to dissect a past relationship. Where did she go wrong, she wonders. “Is it because I don’t give good head?” Appropriately enough, the song is called Head.

Cloaked in self-deprecating humour and a superficial lightness, she fearlessly tackles the personal on this album. Her sexuality and mental health are the underlying themes here, subjects she has spent the past year ruminating over. “I had a lot of these feelings and I didn’t know what to do with them, so I just wrote these songs,” she tells me over the phone from Kolkata. Sengupta, 26, is the lead singer of kitschy alt-rock band Ganesh Talkies, and this is her first solo release. “The songs were too intimate for a band. But I still wanted to write them, to finish them, get it all out of my system.”

It’s essentially a dirty pop album—a showcase of her skills both as an accessible songwriter and her newfound chops at producing music—that has a somewhat lo-fi energy to it. Most of the songs came about as a result of noodling on the guitar, but she’s also taught herself the keys and has tried to compose across a wider sonic spectrum. Songs About Lovers has been produced by Miti Adhikari, who has a long career recording and producing high- profile bands abroad. The two had first worked together on Ganesh Talkies’ debut LP, In Technicolour. She talks of him as a mentor and collaborator, rather than a conventional producer.

She’d found herself increasingly isolated creatively, and that’s what gave her the material. “I identify as female, and I feel that female sexuality… I had a lot of these feelings. I wanted to listen to music that would help me relate to it. In other forms of art [in India], you do have a lot of women who are talking about orgasms, their sexuality, their relationships with their body and their mental health. But when it comes to music, somehow I can’t really find other people, my kind of people, who share the same space as me, who I can relate to.” So she decided to take it up herself.

Her struggles with depression, too, feature heavily in the album. On Straight Outta Coshba, she sings, ‘I take two steps in front and I’m right back to where I started.’ Most songs about her experiences and emotions express her vulnerability. “It was a process of self-healing, pretty much; it was very therapeutic. I have suffered from depression for a long time. It’s only recently that people have started talking about their mental health,” she says. “The only problem I have with that is I do hear people talking about it, but it all seems a little bit alien to me. These come across almost as Public Service Announcements. ‘Chalo, aaj depression trending topic hai; let’s make a skit on depression, or let’s write a song on it.’ For me, that’s not how it works. I’ve undergone a lot of therapy, and it’s always going to be a part of me. I felt like it was important to talk about my shortcomings, my mental health, because I’m hoping someone will be able to relate to it. It’s coming from a very intimate, vulnerable space. I’m just, like, baring myself.”

THIS IS AN altogether different side to Sengupta. Ganesh Talkies, which she fronts, is a flamboyant band. They sound as much like the 90s’ grunge and alt-rock bands as they do like Bappi Lahiri. They get on stage wearing loud, shiny costumes— straight out of an 80s video—and the music has a bouncy energy, soaked in old Bollywood motifs.

“I’m not happy with the way things are in India. If, in 2020, things get magically better, then maybe I’ll start writing love songs” – Plastic Parvati, Singer

Their getup began as a way to set them apart on stage. (Also, she tells me—only half in jest—how her band members all used to dress shabbily, and there was no way she was letting them get on stage in chappals.) Their friend Ayushman Mitra had made all these clothes under his newly formed label, Bobo Calcutta. “We were like, ‘Let’s just wear his clothes.’ As far as the music bit is concerned,” she says, “we’ve always wanted to make it fun and light. We want to make sure people come and dance.”

Lyrically, the band started off with breezy satire. But over time, their material has become a lot more politically inclined. It has become angrier. On their song The Great Indian Freakshow (2016), Sengupta takes aim at the establishment, saying, ‘Television is a joke / and newspapers they lie / controlling when you laugh / and when you cry.’ “We’re all growing as human beings,” she says. “The way I used to think in college is radically different from where I am now. I feel like I do have some responsibility now. People are listening, and I might as well have something to say.” Over time, and with the burdens of adulthood, Sengupta has felt a growing sense of resentment. “As a person, I’m not happy with the way things are in the country. It’s just how I feel; I can’t fake it. If, in 2020, things get magically better, then maybe I’ll start writing love songs.”

The band had been active in the Indian independent circuit; they were repeat performers at all the major festivals and pubs. But early last year, they suffered a tragic setback. Their guitarist Ronodeep Bose was in an accident that left him in critical condition. He’s still in recovery, and Sengupta hints at how hard this has been for the band. For now, they’re playing with a new guitarist, Ritaprabha Ratul Ray, and trying to figure out a setup that works for them.

In India, most young guitarists, when they start off, purchase an amplifier made by Stranger, an Indian company. It’s solid and cheap, but it doesn’t really match the quality of foreign brands. “You keep practising and you get really good at that Stranger amp,” Sengupta says. And once you master the Stranger, you could sound great anywhere. “Kolkata is that Stranger amp.” It’s where she lives, and she feels a certain kinship with the music scene of the city, despite the problems that plague it. “The music community is very strong here. It’s a small scene; there’s like 10 of us, we all know each other, we’re all hanging out together.” The city has spawned a fair number of bands that’ve made their mark in the indie circuit, from Skinny Alley/Pinknoise to the Supersonics, Tajdar Junaid, Parekh and Singh, and others.

“In terms of an audience,” she says, “it’s not good. It’s really depressing. If you can get people to listen to your music here, if you can get them to turn up, you can manage that anywhere. But having said that, the reason why a lot of good music comes out of Kolkata is because there’s zero hustle. It’s a nice, cheap city to live in; you don’t have to worry about rent. There’s no sense of competition, so you can spend months and months mastering one song. That’s the vibe here; it’s very easygoing and laidback.”

It’s in sharp contrast to, say, a city like Mumbai. “I love Mumbai, but I don’t think I could live there. We’ve played a lot of gigs in the Northeast and in Mumbai. People in Meghalaya, or in Guwahati, they’re more receptive. They’re not going to be on their phones tweeting. They’re going to listen and respond to it.”

For the indie scene to grow, it needs to be more inclusive. It can sound alien to people not from Mumbai or Delhi. It’s one of the reasons she’s a little disillusioned about independent music in India. She’s also bothered by the trend-hopping that so often rears its head here; right now, it’s hip-hop. A couple of years ago, people were clamouring to get onto the electronica bandwagon.

“Right now,” she says, “I’ve kind of switched off from everything. I don’t know why people don’t acknowledge it, but the indie scene is not a very good place for women.” She’s particularly annoyed about how accusations levelled at Pune-based High Spirits—for permitting a culture of misogyny—eventually amounted to nothing. There was an outcry at first, but now it’s all back to normal, and with no punishment meted out to the accused. “If I’m being a part of the scene, I’m a hypocrite. Here, I’m trying to educate girls about their bodies and healthy sexuality.”

She’s now contemplating an act two to Songs About Lovers. “I want it to be dirtier, more fucked up. Everything that’s going on in my head. I want to talk about it. I’m trying to do my bit.”