Daniel Langthasa: Songs of the Subversive

Daniel Langthasa is always angry. He tells Akhil Sood why 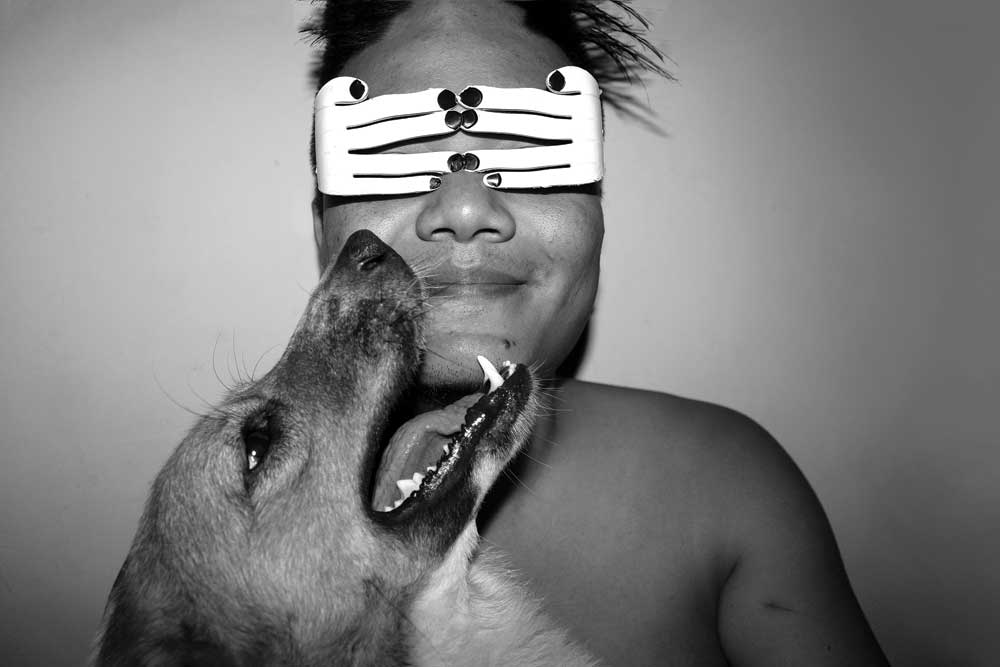 DO YOU WAKE up angry every morning, I ask Daniel Langthasa. Are you enraged right off the bat? He gets into trouble all the time as Mr India (no relation to Anil Kapoor), performing and writing original music and parodies that double up as social commentary. The comedy is apparent from the start—Mr India’s signature accessory is a pair of sunglasses, where two hands appear to cover his eyes, and his lyrics have an accessible strain of caricature and mockery—but deeper inspection reveals a man of rage who uses satire as a tool of protest. He’s crowdsourcing ideas for the last 20 songs in this particular manifestation of Mr India right now, after which he goes on a temporary break.

Anyway, returning to his morning mood, turns out he has gotten a lot more relaxed in the past couple of years, ever since he got married. He wakes up late, at around nine or 10 — in Haflong, a small hilly town in Assam. “My mother wakes up at six. She’s always saying, ‘Kuchh nahin hoga iska’,” says Langthasa. Once he is up, his first call of duty is cleaning up after his 10 dogs.

Langthasa, 32, is taking some time off Mr India for the time-being. He’d been prolific since the onset of Mr India last year; his YouTube page has, at the time of writing, a total of 124 song videos. “It got a little hectic,” he says, over the phone from Haflong. “What I was doing started to get really popular, at least in my town, and in Assam.” He received numerous requests on topics he should sing about as well, and it was all a little bit much. “I was confused about it for a long time. I’m not here to be a ‘spokesperson’. When I interact with people, they understand the music, and they understand that songs can bring about some change. But at the end of the day, you have to go out and do something in the real world. I found that a lot of times, it would stop [before that]. You make something, you put it out, people hear it, they share it. But no one would really go and do something.” Langthasa also realised that he “cannot be angry with everything”. It’s a period of gestation and self-discovery right now, one in which he’s trying to understand himself and his ideas better.

For now, he’s decided to write 20 new songs over the next month or so, based on ideas sent by fans. Many suggestions are about disenchantment with the government, both at large and in Assam in particular. Once he’s done with the songs, Langthasa will give this version of Mr India a break of sorts. He’s not retiring the name. He’s got a bunch of other ideas on how to take things forward as Mr India, although he’s holding those particular cards close to his chest at the moment: “I have some plans in place but I don’t want to say much about that right now,” he says.

I think my music has crossed over into activism. When I meet people, they consider me an activist. They feel that’s what I do. And they tell me to take up causes

Langthasa’s songs, sung in Haflong Hindi, are packed with several layers of irony and absurdity. The music he picks, especially in the parodies, often direct the listener toward a specific mood, which he then subverts through the use of invectives. Take, for example, #Chinkysong, where the familiar tune of ‘Sexy, sexy, sexy, mujhe log bole’ is replaced by the racist slur ‘chinky’, sung casually over gentle plonks of the acoustic guitar. “Chinky chinky chinky mujhe log bole,” he sings, with a goofy smile on his face, from his pink-walled bedroom. His aesthetic, both in his music and in the lo-fi visual elements of the videos, is deliberately obtuse and undercooked, kitschy and wry at all times.

Langthasa often directs his ire at national matters—right- wing fundamentalism, homophobia, hypocrisy in Bollywood, the politics of Chetan Bhagat. But, just as importantly, he tackles local issues plaguing his district. A lot of Mr India’s work resonates with the youth— teenagers, particularly—of Haflong because he’s singing about their lives. Justice for Newton Phonglo came about because a guy named Newton Phonglo wrote to him on Facebook, telling him about a property dispute he was facing. Langthasa directly named the individual who wanted to demolish a part of Phonglo’s house in order to build a garage for himself, which led to backlash in his community, even from his own family. He has also written and sung about small-time, commonplace corruption, such as paying bribes to get work done at local offices. “The guy at the passport office would ask for Rs 500. I’d think, ‘Mein kya Gandhi ban ke baithoon sabke saamne. De do 500. That’s what me, my mother, my friends, everyone feels that. But abhi aur chup nahin rehna hai. I decided, ‘No! I don’t want to give that money. I’ll even write a song about it.’ I knew I was pissing everyone off, but it took off from there.”

More recently, Langthasa has taken up the cause in his music—and on the ground—of disgruntled employees at the NCHAC, the autonomous council governing Haflong, who haven’t been paid their salaries for nearly a year. At a protest outside the council, security forces lathi-charged the protestors before the arrival of the Governor of Assam. Langthasa shot the aftermath and interviewed those affected. The video was widely shared on social media. Is he really an activist then?

Langthasa has been around in the independent music circuit for several years. He was a part of Digital Suicide, an alternative/punk/electro act out of Haflong, and he’s played at most big gigs across the country. But he was also put off by the narrow scope of it all, which led him to create Mr India.

I know what I believe in. But to make people believe in it too? You know how difficult that’s going to be?

The thing is, activism through music is all well and good, but at the end of the day, the quality of the music matters. The only way its content will impact listeners is if the music is actually any good in the first place. And Langthasa does have a talent that lets him shift gears between different sounds and genres with ease. An underlying sensibility—seeped in traditions of pop music—lends his songs a self-assured base on which to launch his attacks. But given the impact he’s had on his community, and online (where he has staunch supporters and haters), the idea that the music is secondary to the cause is worth exploring. Langthasa’s own beliefs lie somewhere in the middle. He repeats how there’s only so much that a song can do; that change requires more. But then, he also understands the role music can play. “When I started,” he says, “I was a little hesitant. I didn’t want to be in that activistwaala zone. I didn’t want the ‘musician-activist’ label. At the time, I still considered myself a musician. Yes, I was writing all these things, but it’s very different from doing things in the real world. This idea of the internet on a mass level was still very new in India, especially in my part of the country, where it’s been around for maybe just two years. Or one year… But I agree; I think it’s [my music has] crossed over into more activism. I say this because now, when I meet people, they consider me an activist; they feel that’s what I do. And they tell me to take up causes.”

Langthasa is a rare voice in the so-called independent music space, one that’s actually tackling socially relevant issues. Rock ‘n’ roll in India is often criticised for being in a bubble and staying aloof from contemporary politics or society. Hip-hop, in that respect, has moved far ahead, while regional music movements across the country have always had a spirit of protest. So Langthasa stands out almost as a lone crusader in his chosen discipline.

He feels that bands should consider the role language plays—his shift from English (with Digital Suicide) to Haflong Hindi was revelatory and “liberating” for him—even though he acknowledges the insistence on English. “The sad part is that musicians on the scene are really talented; they’re making some good music. But it gets lost because you’re not being who you are.” He feels that the lyrical content doesn’t even necessarily have to tackle the so-called ‘big’ issues. It could just be local. “Suppose you’re a band in Mumbai. Talk about the local goonda in your locality, the corrupt politician in Dadar or Thane or whatever. It’s so funny; this is supposed to be rock ‘n’ roll,” he says.

LANGTHASA’S FATHER, NINDU Langthasa was killed in 2007 in a militant attack. He had been involved with politics, serving as an elected candidate, first independently then with the Congress. Earlier this year, Langthasa uploaded a series of photos on Facebook where he narrated a story through 13 placards. He claimed that the ruling party had recruited former militants into their party and paid them handsomely. ‘Can you please explain this to me Dear BJP and ABVP?’ one placard read, which led to plenty media attention and vitriolic trolling. Later he posted, ‘[My father’s murder] has scarred us forever. We smile but we truly never laugh. And yes, am not ashamed to admit that we fight too. We get frustrated. We feel hopeless.’

There have been other (not as high profile) run-ins as well. And while Langthasa has a strong following online, within his own community— in Haflong—he has gained a certain notoriety.

Naturally, questions of his safety arise as well. “My family worries about it, of course. Why wouldn’t they?” he says. “But I still don’t have an answer to that. I’d like to say, ‘Yes, of course I’m scared.’ That’s the natural thing to say. But I don’t know. Maybe, subconsciously, I’m not afraid. I don’t know, I keep doing it. But haan, abhi tak aisa threat nahin mila hai.”

Langthasa has considered getting into politics as well, but he’s still undecided. “My idea of politics is very different. The problem is, I don’t have something I can follow, which I can learn from; something I can refer to that has been done before. I’m also an introvert. I know what I believe in. But to actually make people believe in it too? You know how difficult that’s going to be?”

As of now, Langthasa is working with ROOHI, a social enterprise started by his wife, Avantika, which aims to empower weavers and artisans of the Northeast by creating a new market for their apparel and jewellery. Apart from that, Langthasa plays the odd gig or two whenever he’s travelling. The rest of the time, he’s busy walking his 10 dogs around town.