Lost in the City

Jagannath Panda traces the plunder of our landscape 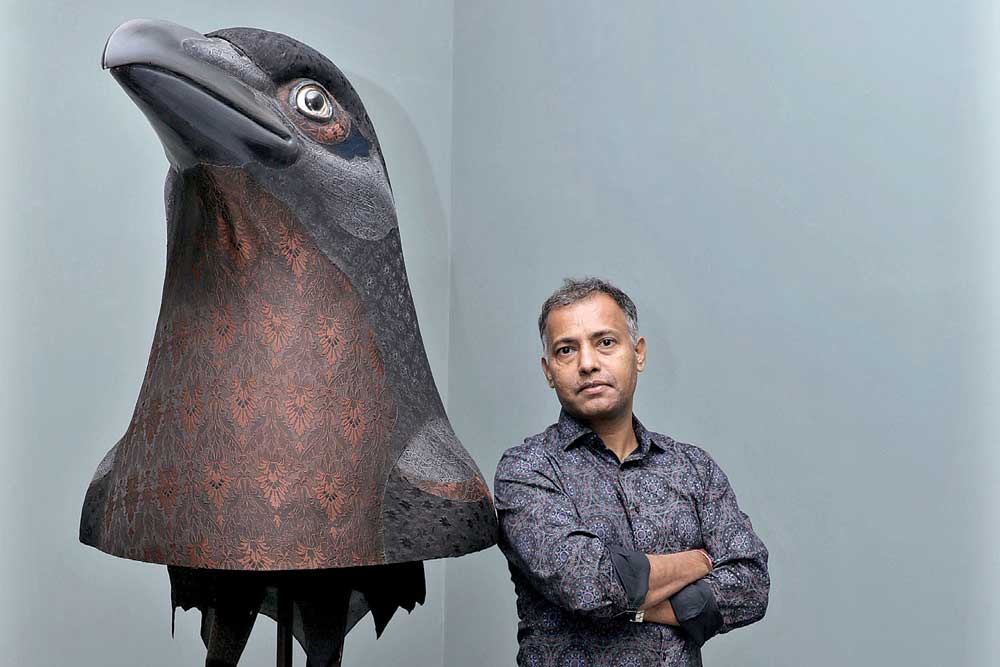 EMERGING FROM THE earth, like an apocalyptical metropolis of the future, the ‘Crystal City’, as envisioned by artist Jagannath Panda, is both a wonderland and a nightmare. Shiny geometrical forms emerge out of the soil, transforming the very landscape of everyday skyscrapers and homes. This many layered ‘vision’ has roots in the artist’s past, even as it speaks of the future. Panda has dug deep and creates a vision that is nuanced, layered and terrifyingly beautiful, all at the same time. His work examines the act of migration to the city while problematising the ruthless plunder of the landscape to facilitate ‘better living’. “This entire body of work, that took two to four years in the making, has its genesis in my childhood where the iron-ore mines in Barbil, Odisha, were an ever-present motif of my growing up years,” says the 47-year-old Panda whose solo, after a seven-year hiatus, opened recently at Vadehra Art Gallery, Delhi.

Panda’s starting point has often been his home state Odisha. He has referenced its local crafts and traditions in his past works. But it’s in ‘Crystal Cities’ for the first time that he actually evokes Barbil, a town in Keonjhar district known for its cosmopolitan culture that’s a result of its iron ore-rich soil. To capture the essence of iron ore, Panda wanted more than just a painted surface. “I have been researching new fabrics, for many years and conducting small experiments while continuing with my usual paintings,” he says. The shiny acrylic fabric used in this solo exhibition was a big discovery for him. The fabric is cut and fixed to the canvas with glue, crafting the geometric cities, while creating a three-dimensional feel to the otherwise painterly, flat canvas. The other elements that have contributed to the exhibition are a collection of found objects, such as plywood, photographs, seashells, fibre- glass, wood and all kinds of everyday objects that have been transformed by the artist. This may sound like a mélange of many materials, but the objects have been assembled in a manner that is systematic and restrained, resulting in a meticulous artwork.

The simple ‘dream homes’ of his past works have taken a new form, one that is chillingly close to reality and yet remains surreal. “I would not call myself a Surrealist, even though I make an open reference to Salvador Dali in one of my works. I say this only because I am more interested in the alchemy and transformation of objects, rather than just the subconscious or the dream state,” says Panda. He means he is interested in the actual alteration that is wrought upon objects and places over time. “Our cities were once places where people moved for a better life, but this quest for more has given way to a kind of greed that does not stop at the margins of the forest,” he says, adding, “There is an obsession with the desire to possess objects. We have lost sight of the larger objectives, our sense of belongingness, peace of mind and general value for life. The solution is not just planting a tree to make the problems go away, but prolonged and consistent care for life.”

The solution is not just planting a tree to make the problems go away, but consistent care for life

The exhibition is roughly divided into three sections: large canvases, smaller mixed media works and sculptural assemblages. It speaks of mankind’s greed that eats into natural resources, taking over forest land, plumbing and mining the soil, the oceans and the skies, till all that is left is a barren wasteland. While Panda’s concerns are serious, his tone is not all gloom and doom. He even slips in a bit of humour and a smidgen of fun. “A lot of my sculptures and even some of my canvases that have a futuristic feel to them get their ‘inspiration’ from my son’s collection of toys,” he says, with a twinkle in his eye.

The rockets and space ships in the canvas Speed Metals are clearly inspired by his ten-year-old’s toys. “What I am trying to achieve with Speed Metals is a canvas that has no single perspective, but multiple points of entry into the picture plane,” explains Panda. The dizzying effect of this canvas is brought out by the many perspectives combined into one picture plane. The butterflies scattered among the metallic aircraft make for a good contrast, emphasising the speed and nonchalance of city life. In yet another painting titled The Structure of Arid Terrain, the city is literally built upon the head of a dead deer, highlighting how nature and wildlife have been exploited by mankind. Panda does want to shock his audiences or awaken their moral compass. “I want to take the stance where life and growth are not opposing forces. We need to strike a balance for a more harmonious existence,” he says.

Another set of works that are more intimate in scale and intent consist of assemblages of objects, toys, photographs, many of which are small studies for larger sculptural works. Each study of a home has a story behind it; it could be a favourite film taken from the artist’s collection or a drawing done on a residency. These ‘homes’ are arranged like curio cabinets and form the perfect foil for the larger works. The works seems to hint that mankind is essentially a collector of objects, however this act of collecting need not lose touch with nature. The work addresses the inside-outside world and the relationship that society tries to establish in a chaotic, aspirational life.

What is striking about Panda’s work is that while human presence is hinted at through objects and buildings, the actual human being is absent from the canvas. What is the reason behind this? Panda says, “I have consciously kept these spaces anonymous because I want the viewer to be able to insert themselves into the work. If I were to paint a human being into the canvas, then it would become too specific. This way it is more universal,” he says.

The show would not be complete without the signature Panda sculptures, which include the head of a brahminy kite, a common crow and a deer. The Profiteer is the crow with its bag of tricks seen in the lower half of the sculpture. The brahminy kite is The Custodian of Untold Truth, a title earned by its noble bearing and regal poise.

The exhibition is like unravelling a mystery, as each canvas, assemblage and sculpture carries a layer of meaning. Clearly, Panda is at the height of his powers now. n