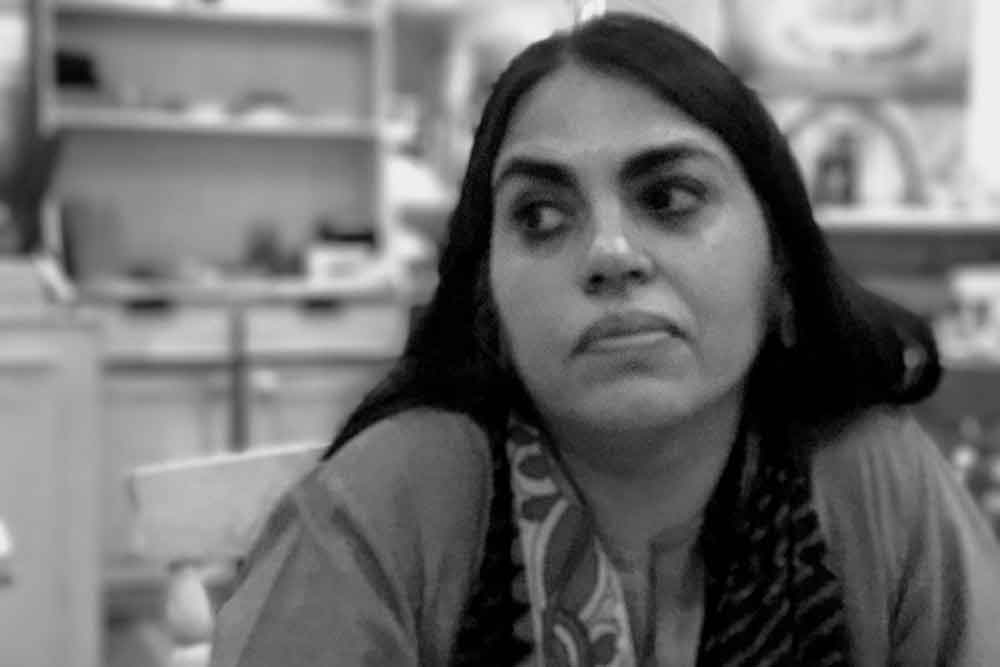 
“I have always naturally dealt with my life through art,” says abstract artist Alita Chandra Wig. Art has always been a prevalent theme in Chandra’s life, this can be seen in her works and the way she describes them. Several of Chandra’s works were on display at the recently concluded Aldila 2021 Beyond the Obvious Hyperaesthesia Onerica Exhibition at the MADS (Mediator. Advisor. Dealer. Seeker.) gallery in Milan.

The concept of Aldila is that it is an unknown place which can only be accessed through the mind. Chandra, 56, informs Open, “It’s not afterlife, it’s real life or reality.” This is fitting for a digital exhibition, filled with striking thought-provoking artworks by at least 200 noted artists. There are groups of 14 artists, and each group has its own curator. Speaking on the exhibition, Chandra describes how its format intrigued her. “It is a physical gallery, but they put up everything online as well. If you go the gallery, you will find the artworks put up on huge screens, which project the works in those spaces, and visitors can touch them, and increase or decrease the space, giving it a kaleidoscope-like effect,” she says. She explains that she had gotten to know MADS gallery through Instagram. The gallery had invited her after seeing her work on the social media platform. “I gave in works that I had done earlier, and they gave us a month to put things together. So, I put up works I had done before, that I thought would work on the screen.” Although this was Chandra’s first experience in an online exhibition, she is far from a novice, as she has worked on art all her life, and has also previously exhibited at venues such as the Triveni Kala Sangam in Delhi.


One of Chandra’s most striking works at the Aldila exhibition is Covid Lifelines, which as the name suggests, was done last year. When the viewers look at the intensely blue artwork of mixed media, pen and ink, acrylic and watercolours, it almost gives them the impression of being underwater among a mosaic of vivid, brightly coloured fish.

I never had much time with my parents, and I had very few memories of them. I lived with their art, not with them, says Alita Chandra, artist

This was a commissioned piece, around the colour blue, which has now gone to New York. She started working on it just before the pandemic, but had to stop when her studio shut down, and had to start work on it all over again. “It really was a lifeline, exactly like the title. I was so happy I had that to do, otherwise I don’t know how I would have dealt with Covid,” recalls Chandra. At that stage, she had asked her buyer if, given the widespread pandemic, the artwork was necessary. The buyer had replied that, at this point of time, the best and most vital thing that is required is art. Chandra wholeheartedly agrees with this philosophy.

Art is not just a part of Chandra’s life; it has also been her inheritance. Her parents, the painters Avinash Chandra and Prem Lata Chandra were renowned artists. Avinash Chandra was known for his paintings of the female body and for creating his own style in reconciling Indian subjects with Western Modernism. He moved to London with his wife after she got a scholarship to study there in 1956. Avinash was also the first Indian artist to exhibit at the international art event—documenta in Kassel, Germany, in 1964. It is not surprising that art has been such a major influence in their daughter’s life. Some of her earliest memories are of her working on her own art alongside her father, whose table of artwork nearly took up the whole room. However, these are some of the only memories she has of him. “We left London, where I was born, for New York, for four years when my father got a Rockefeller scholarship. It was a lovely time. Then he went back to London, while I returned to India with my mother,” says Chandra. Prem Lata, whose health was poor, died six years later, leaving Chandra to be raised by her maternal grandmother. “I never had much time with my parents, and I had very few memories of them. I lived with their art, not with them.” Chandra therefore only got to know about her parents through other people, their colleagues, students, and books. She was always eager to know more about them through these mediums, and reflects that she became acquainted with them, and rediscovered them through their art, which she could only truly understand once she was an adult.

“It is strange how I keep coming back to art,” says Chandra. “Whatever my emotions were, I just worked with a piece of paper and a pen. It’s been an organic way of reacting to life.” This natural process can also be observed in her other works in Aldila, such as the Rhapsody series, where her technique of swirling colours in mixed media, watercolour, pen and ink, and acrylic is seen. The works Rhapsody Passion and Rhapsody Jazz are especially memorable with their bright, flaming strokes in warm colours. “I enjoy putting on music when I work, as I have with all these pieces in the exhibition. That why they have been titled ‘Rhapsody’. When I look at these works, I feel they are musical,” says Chandra. This elicits the same response in the viewer, as her displayed works have a multitude of lines in different directions and colours. This, muses Chandra, is how she sees her life.

Chandra’s life is by no means a straight line. She wanted to take up art when she finished school, but her grandmother was against it. “She thought I was taking a risk like my parents. Art was not very acceptable at that point of time. The path of Fine Art is still not necessarily an easy one, in terms of having a regular life and steady finances,” she says.

This means that Chandra, who works in abstract art, is mostly self- taught. “I officially did not learn it from anywhere, it was just a natural way of life, a way to work through my emotions.” Emphasising that art doesn’t have to have a specific pattern, Chandra adds she didn’t have a process, it just evolved naturally and unconsciously. “I just enjoyed the space and dreaming on the paper,” says Chandra who describes herself as an abstract expressionist.

Although Chandra didn’t study art in college, she decided to study something involving commercial art or design. While studying at various institutes she realised textile design was best suited for her.

She studied at National Institute of Design in Delhi for one first year, then went to NIFT in Madras, and returned to Delhi’s Pearl Academy to study weaving. Chandra then worked in weaving, home furnishings and rugs, especially with the US design firm Crate & Barrel for a long time. She also did a lot of work for Fabindia and helped produce rugs as well. This eventually became a full-time business. Now, as Chandra says, she is a full-time artist. “I may not have done art in the traditional course or during a set time frame, but it is still a way of life for me,” she says.