Always loyal to the figurative, Krishen Khanna still retains the lyrical possibilities of his lines 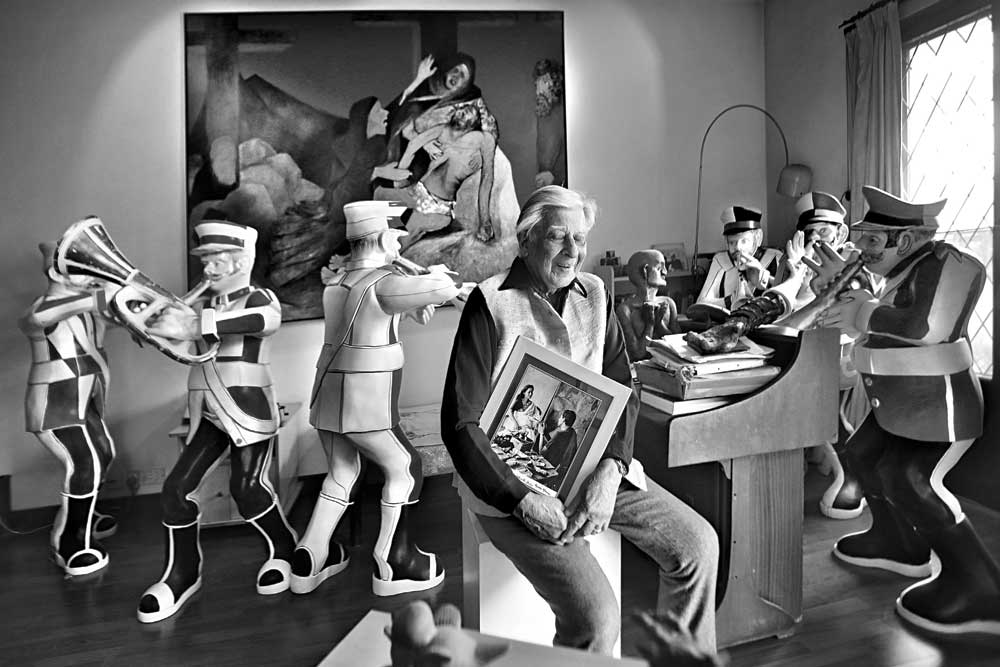 UNLIKE HIS CONTEMPORARIES FN Souza, MF Husain and VS Gaitonde, for 14 years, artist Krishen Khanna successfully juggled his art practice with a career in banking as an employee of Grindlays. As the title of Richard Bartholomew’s 1957 piece in The Statesman suggests, Khanna’s identity was that of a ‘Banker-Painter’, which meant he was forced to paint at night, given he was moonlighting as a professional artist and not a mere hobbyist. In 1949, he’d already shown as part of a significant group exhibition at the Bombay Art Society organised by SB Palsikar. His wife was on a ship when she’d met someone who knew Palsikar who then wrote a letter asking to see some of Khanna’s work. “One day, Palsikar just arrived at my place and took away a small canvas that depicted crowds reading the newspaper after Gandhiji’s assassination [News of Gandhiji’s Death, 1948] and put it up in the exhibition,” he said in an interview with journalist Vandana Kalra in 2015. It was only a matter of time before Khanna was inducted by Husain into the Progressive Artists’ Group.

In 1953, Khanna was posted in Madras, where he continued to burn the midnight oil, his process consisting of one long sitting, from nine in the evening to three in the morning. “I don’t build up my pictures from preliminary sketches. I work straight on the canvas. Yes, from the mental notes I make,” the now 91-year-old artist told Bartholomew back in 1957, when he was 32. “When I smear the canvas or lay on the base paint, I make the first contact with the new experience and the image grows. Painting is really a capacity for image-making.”

Khanna had considered being a full-time professional artist, but the financial constraints it entailed made him shy away from such a life. He settled for evening classes at Mayo School of Art, and, for 14 years was relatively content with his bank job, until he found it difficult to pursue both professions simultaneously. In 1961, he quit Grindlays. On his last day at work, Husain, Gaitonde and Bal Chhabda were at the door, waiting for him to emerge. “The moment I came out, Bal Chhabda took my tie off, saying I won’t need it anymore. We went out, had tea together to celebrate and then dinner at a place called The Coronation Durbar. Raza threw a party in Paris; they had all wanted me to quit,” Khanna recounted in his interview with Kalra, published in The Indian Express. His savings, amounting to Rs 25,000, held him in good stead for a while, but Khanna realised he had to work harder than he did at the bank. Fifty-five years since, it is safe to assume his decision to be a full-time painter reaped him more than his expected share of dividends.

DESPITE STRAINING ONE’S ear, smart phone in hand, one had to struggle to catch strains of Krishen Khanna’s speech over the microphone that was muted by the madding crowd. Photographer Ram Rahman used his baritone voice to shush the audience of Khanna’s family, close friends, art world cognoscenti and collectors who had all gathered for the preview of his exhibition of recent work that inaugurated auction house Saffronart’s swank new gallery space at The Claridges in New Delhi on November 3rd. The nonagenarian cut a dapper figure with his silk Nehru jacket strapped over a Prussian blue shirt, his shock of silver hair the only indication of his age. Unlike Akbar Padamsee or the recently deceased SH Raza, his speech was unassumingly sharp, punctuated by the long held trace of an English accent, a remnant of his formative years spent between 1938 and 1942 at the Imperial Services College in Windsor before returning to pre-Partition Lahore to study at the Government College of Art (1942-44), where he apprenticed with painter Sheikh Ahmed. The slight weariness that had accompanied his tone when I’d spoken to him in early September was absent. It had been a case of bad timing; Khanna couldn’t keep our date at his studio because he was too preoccupied with completing the works for this show. Around then, he was also busy with Saffronart’s Evening Sale for which he had put up Padamsee’s 1960 painting, Greek Landscape that had been in his possession since its creation as a prime lot. Khanna had acquired the painting for Rs 1,000 through Bal Chhabda. At the time he even wrote a letter to Padamsee confessing he was ‘terribly envious that you had painted such a magnificent painting’. Khanna felt increasingly daunted by the logistics involved in maintaining the painting, which impelled his decision to place it on auction. Greek Landscape sold to an anonymous bidder for a world auction record-breaking Rs 19 crore, double its estimate, making it the highest amount paid for a Padamsee work to date. It also reinforced Khanna’s eminent role as an artist collector. His secure position at Grindlays afforded him the means to acquire work by his contemporaries.

I used the monochrome not because I didn’t have paint. In fact, a lot of my friends thought I was a bit stupid; colour does sell

The 3,000-sq-ft gallery featured 31 recent works by Khanna. After CEO Hugo Weihe announced the rationale behind the relocation from The Oberoi to The Claridges, citing its central location as the main impetus, he handed the floor to Khanna, who began by graciously quipping about how many present seemed to like the work while many seemed to pretend to like it, suggesting they could be lying. The modesty behind his jibe was unmistakably remarkable and formed the undertone of the rest of his brief speech. “I used the monochrome not because I didn’t have paint,” he said, in an attempt to explain the aesthetic that marked all the work that hung around us. “I had paint, in fact, a lot of my friends thought I was a bit stupid; colour does sell.” It was a blink-and-miss kind of moment, captured by many cell phones and cameras, accented in parts by enthusiastic applause. For the rest of the evening, Khanna sat on a chair, greeting friends and acquaintances. His sharp memory ensured he was able to register each face. I knew better though than to try my luck arranging for a studio visit now. It was too late, I had to content myself with seeing the finished paintings first-hand and not as works-in-progress. It was not an unhappy compromise.

It isn’t too far-fetched to imagine if, through this new suite of paintings, Khanna was unconsciously circling back to the aesthetic predisposition that marked his early works in monochrome, browns and blacks, as well as the subject of the aviary. Bartholomew, in a seminal essay published in Lalit Kala Contemporary in 1978, titled ‘Attitudes to the Social Condition: Notes on Ram Kumar, Satish Gujral, Krishen Khanna and A. Ramachandran’, wrote eloquently about how Khanna’s early works depended greatly on the verve of the line. ‘I feel now that these early works with their emphasis on the suggestive power of the line and on the ambiguity deliberately deployed to diffuse the image anticipate the effects achieved in Krishen’s most recent paintings,’ he wrote in parenthesis. ‘In these, the maze of the revealed line—achieved by emphatically blocking out the images of the painting with staccato strokes— suggest a presence while the broad mosaic of the blocked-out areas recreates the essential rhythm of the latent age.’

The many pared-down drawings of imposing men confronting the viewer’s gaze, predatory bird in hand, revealed the same certainty of line that has marked Khanna’s vast oeuvre from its very inception. Birds hovered in and out of Khanna’s recent canvases like prescient, ominous beings; their formidable presence established by their brilliant renderings in charcoal. Animated through Khanna’s gestural strokes, the perched hawks and falcons seem to have posed for the artist on agreement of being depicted as occupying centre stage. Their individuality is foregrounded by their poise, and yet, the conviviality they share with their male counterparts forms the pretext of the painting. Any fragility that is inadvertently revealed is on the part of the men upon whose fingers or shoulders or head they are perched.

One mesmeric untitled drawing shows a crow-like bird suspended in ambiguous motion, either about to perch or having just alighted, one set of feathers swooping down, the other ruffled by wind. By privileging the nakedly sketched line over paint, Khanna allows us a ringside view of his technical prowess. Perhaps knowing he has nothing left to prove (he took care of that when he was commissioned to paint the dome at the ITC Maurya, New Delhi, resulting in the magnificent work, The Great Procession), Khanna concentrates squarely on dynamic image-making, whether in the sketches or in more grandiloquent work, like the Untitled acrylic and charcoal on canvas triptych depicting an elephant choking a tiger with his trunk. Khanna’s other recurring theme—that of Partition— also finds articulation in the show, with two works depicting the movement along the border, towards East Punjab in 1947. Khanna’s memory of the gruesome price paid for Indian Independence; the human cost he witnessed firsthand as he too was forced to leave Lahore; moving with his family to Shimla, instructs his scenes that portray the horror. In the two paintings in this show, the exodus of people and animals across rough terrain is voiced through a negative image embedded in acrylic and charcoal on canvas; black shadowy bulls contrast against bleached-out human forms, as if signifying an erasure of dignity.

Unlike Padamsee, Ram Kumar and Raza, Khanna remained furtively loyal to the figurative in all its lyrical possibilities, even in his sumi-e paintings in the mid-60s, done after a Rockefeller fellowship to Japan, where the gestalt motif still comprises the figure. These new vignettes confirm that solid connection with form and narrative content, an excellent example being the Untitled work signed at the back as ‘Draupati Dragged by Dushashna to His Lap’ from his Mahabharata series, that hones in on Draupadi’s moment of shame, her hair hanging over her face like a veil, her hands holding her sighing head, her toes clasped together as if echoing the body’s cringe.

For a generation such as mine that did not grow up exposed to Khanna’s oeuvre, this exhibition offers an illuminating foray into the intensity of the Modernist artist’s rigorous mark-made form of line that is at once certain yet also poetic. For the generations that came before me, the show reasserted Khanna’s reputation as an underrated master.

(The exhibition will run till November 13th at Saffronart, Delhi)