A vibrant new film festival portrays the multiplicity of claims on Indian cities, the freedoms they enable and the burdens that still weigh them down 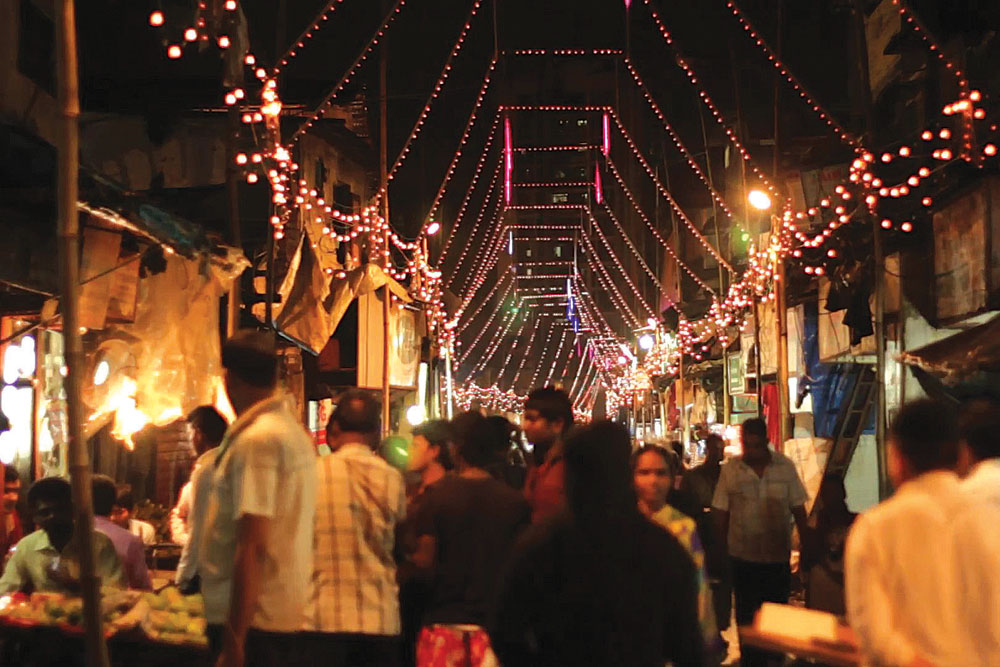 UNTIL THE MIDDLE of the 20th century, the Indian city was viewed with deep ambivalence by many of our most influential thinkers. If, as Mahatma Gandhi put it, the future of India lay in her villages, urban life was a strange new blip on the horizon, the city a den of new vices in which anything could happen.

But the breakdown of pre-existing social norms—the very thing that made the city potentially anarchic—was also what made it potentially revolutionary. The city became a true home to the accoutrements of industrial modernity: factory labour, public transport, urban forms of mass entertainment—ensuring that people who had been kept apart by centuries of socially-enforced codes were now forced to jostle against each other.

As new classes and communities laid claim to the shared spaces of the city, they looked to the promise of modernity and democracy made by the new nation. As more women came out to work—and sometimes play—they slowly but surely challenged the assumed male control of the public sphere. An urban working class acquired a consciousness of its identity. Castes that had been deprived of most rights in the village made a concerted effort to get justice in the city. And yet none of these claims, or identities, was formed without a struggle.

In more recent times, the city has become the site of new movements for recognition and freedom—fighting for the liberty of sexual orientation, or against new forms of late capitalist ‘development’—as well as the locus of powerful attempts to polarise and/or crush them.

This glorious multiplicity of claims to the city—and via the city, to fuller citizenship—were put on view in cinematic form at the recent Urban Lens Film Festival. Organised by the Bengaluru-based Indian Institute for Human Settlements (IIHS), the festival’s third edition this year followed up its annual Bengaluru screenings with a packed weekend in Delhi. A refreshing mix of films by established names and upcoming directors, the fare was largely non-fiction (although a couple of animated films and a semi-fiction one made it in). And while some well- known filmmakers—Harun Farocki and Fatih Akin—represented the rest of the world, the festival kept its focus on the Indian city.

Caste made its appearance early on, with two student films. Not Caste in Stone (2014), directed by a group of students from the Tata Institute of Social Sciences (TISS) is a thoughtful encounter with how the city can simultaneously reduce the stifling grip of caste, as well as create new avenues for it to express itself. The 31-minute film is structured around an anecdotal history of Mumbai’s Tamil- speaking communities, mapped onto the city’s geography. While most upper- caste Tamil migrants settled in Matunga, at least 25,000 families from Tirunelveli district arrived in Dharavi and went to work in tanneries run by Muslim traders. Matunga, despite being the best known site of Mumbai’s Tamilian cultural presence, remained off-limits to Dharavi’s Tamil population, especially in terms of access to temples. Despite this reinforcing of caste divisions, the city is seen by many Dharavi residents as offering a degree of freedom unavailable in rural areas. “Apun Schedule hai… India aazaad ho gaya, hamara samaj toh aazaad nahin hua (We are ‘Scheduled’… India got freedom, but our society didn’t gain freedom),” says Kanakraj. “Bambai mein aazaad hai… Lad ke bhi dikhaya idhar (In Mumbai we’re free… Here we fought and showed them).”

The carving out of a caste identity in the city, the film suggests, initially involved the establishment of civic associations like the Adi-Dravida Sangh. But also crucial was an actual space that could mark the community’s location in Mumbai—and this, inevitably, was a temple. Battles over temple entry were waged and won in Matunga, too, but the creation of ‘their own temple’ in Dharavi seems to offer a more permanent, visible articulation of collective identity.

Meanwhile, with B-22 (2014), set and shot in Delhi’s Budh Vihar locality, student filmmakers Shilpi Saluja and Akshika Chandna of Sri Aurobindo College of Arts and Communication (SACAC) offer us a gentle slice-of-life that addresses caste more indirectly. The film’s protagonist, Manju, who literally guides us through her neighbourhood, brings home the intersections of caste with class and gender: the violence of one is tied to the violence of the other.

If B-22 is poker-faced about the depressing water situation in a Delhi slum, the brilliantly designed film Good Morning Mumbai (2011) uses animation and humour to draw attention to Mumbai’s sanitation issues. Remarkably, this too is a student film. With their charming, funny little fiction about a poor jhuggi– dweller’s tortuous quest for a peaceful place to take a shit, National Institute of Design students Rajesh Thakare and Troy Vasanth C flag the issue of Mumbai’s abysmal lack of toilets. The beauty of the drawings partially leavens the squalor of the world being evoked, while the superb soundtrack—juxtaposing a DJ on the radio with an oily minister, toilet sounds and the local bhai—roots us back in an unfortunate reality.

Civic worries are also at the heart of Usha Rao and Gautam Sonti’s Our Metropolis (2014), which takes the construction of the Metro in Bengaluru as the central thread of a lament about the future of Indian urbanity. Shot between 2008 and 2013, the film tracks a rather vast swathe of ominous developments in the creation of a ‘global city’ that seems to care little about most of those who live in it.

A much more specific tack on the ‘global city’—specifically its bulldozing of rights in the service of big business— is taken by Rahul Roy’s The Factory (2015), which traces the Maruti Suzuki case, in which 147 workers of India’s largest automobile manufacturing unit were jailed for years, without bail, on charges of destroying company property and murdering a senior manager. Roy’s engrossing film combines his observational style with an investigative element, providing chilling details that make apparent how baldly fabricated the case is.

OFTEN, A PARTICULAR QUALITY OF A CITY EMERGES UNBIDDEN FROM THE KIND OF FILMS MADE ABOUT IT

The prosecution’s four star witnesses for instance, ‘saw’ the accused workers engaging in violence—in perfect alphabetical order. As against the Maruti establishment’s horror story of worker violence, the workers have a completely different narrative: the entire incident, they say, was a conspiracy by the company management aimed at eliminating the lone manager who had helped get the Maruti Union registered (Awanish Kumar Dev) and simultaneously ridding the company of actively unionised workers. Bouncers in Maruti workers’ uniforms were the ones who started the rioting and set fire to the room in which they had locked Dev.

Roy also goes beyond the case, tracing the history of Maruti in India, and allows us to enter the increasingly constricted world of the industrial worker. His unpacking of life on the factory floor makes for depressing viewing. Worker after worker, from among the 2,500 men dismissed by Maruti Suzuki, provides Roy with details of the organised fashion in which the company had begun to squeeze those labouring at its lowest echelons: reducing the number of ‘relievers’ assigned to each group of workers, doing away with toilet breaks, firing men after they had served their apprenticeship period so that they could hire new ones at lower rates. When Maruti workers—faced with impossible time pressure, humiliating punishments and harsh pay cuts (a single day of absence cost a worker Rs 2,000: a fourth of his monthly variable pay, and a full eighth of his total salary) —sought to unionise and strike work for their demands, the management came down even more heavily on them.

Roy’s film captures the terrible sense of attrition a long-drawn court case can produce, especially under conditions of poverty and political corruption. When he draws the viewer’s eye to the guns and lathis in the hands of security guards and policemen, it is hard not to see these men—likely from similar backgrounds as the workers they’re escorting—as hired guns acting on behalf of a state that is acting on behalf of the corporation. Hope is in short supply.

A comparable sense of the city as a stultifying space which has belied its promises of equality and liberty emerges in Ruchir Joshi’s much more amorphous My Rio, My Tokio. Although as different in style and intent from The Factory as perhaps possible, My Rio... shares with it and Our Metropolis a dull, throbbing anger about the state of things in our cities. Joshi’s series of what he calls ‘video-poems’ about Kolkata takes in a disparate set of things that sometimes seem like events (the death of CPM leader Jyoti Basu, the horrendous Stephen Court fire) and sometimes not (women dancing during Durga Puja, a conversation about Fashion Week).

AT TIMES, THE particular quality of a city emerges unbidden, unplanned from the kind of films made about it. If the Mumbai films at Urban Lens—from Paromita Vohra’s joyful dissection of a stereotype in Where’s Sandra? to Mira Nair’s portrait of cabaret dancers in India Cabaret—displayed a quirky indefatigability, the Kolkata films had an air of melancholy, an insistence on poetry in the midst of death and decay.

A memorable Bangla poem called Nishir Dak (‘Night’s Call’) by the historian Sumanta Banerjee threads together Ruchir Joshi’s ramblings across the city in time and space. The poem itself makes reference to other cultural pasts: the playwright Bijon Bhattacharya’s work on the Bengal famine, Ritwik Ghatak’s cinematic masterpiece Subarnarekha and its brilliant leitmotif phrase ‘Bibhotso moja’: ‘horrific fun’. My Rio also cites Italo Calvino’s Invisible Cities, a Mohiner Ghoraguli song and other poems. Poetry is writ large across a film by another non-Bengali Kolkatan resident, Joshy Joseph, which offers a lyrical tribute to the city’s indomitable spirit via portraits of two men—a retired footballer and coach called PK Banerjee and a poet-filmmaker called Goutam Sen, who was making a film about Banerjee when he succumbed to cancer. The third Kolkata film at Urban Lens, Debalina Majumder’s Taar Cheye Se Anek Aaro is very different from these—a tender fictional portrait of two young women in love, interspersed with real footage of people discussing homosexuality— but it, too, relies more on songs and lyrics than almost all the rest of the films shown. “You can’t run away from text if you’re dealing with Calcutta,” said Joshi during the discussion.

Sometimes, rarely, a filmmaker might want to run not from words but from images. With a city like Delhi, whose iconic monumentality lends itself to having its ‘sights’ ticked off by so many Bollywood films, this fear is all too real. Humaira Bilkis’ Maine Dilli Nahi Dekha (another student film from SACAC) steers clear of this repetitive Delhi: visiting the Adhchini Dargah of Mai Sahiba instead of that of her more famous son Nizamuddin Auliya, bantering with shopkeepers in Chittaranjan Park rather than Chandni Chowk. In one lovely little scene, Bilkis’ camera lingers on a child’s drawing book. “The Taj Mahal,” says the young artist. “Have you seen it?” she asks. “No.” “Then?” “I copied it from my brother’s drawing.”

Those who work with images, like those who work with words, can never cease from quotation. But whatever else our cities may or may not provide, they are an inexhaustible stream of words and images for filmmakers to dip into and bring their nets out gleaming with fresh catch.