Ebrahim Alkazi: The Canvas of a Polymath

The forgotten paintings of Ebrahim Alkazi 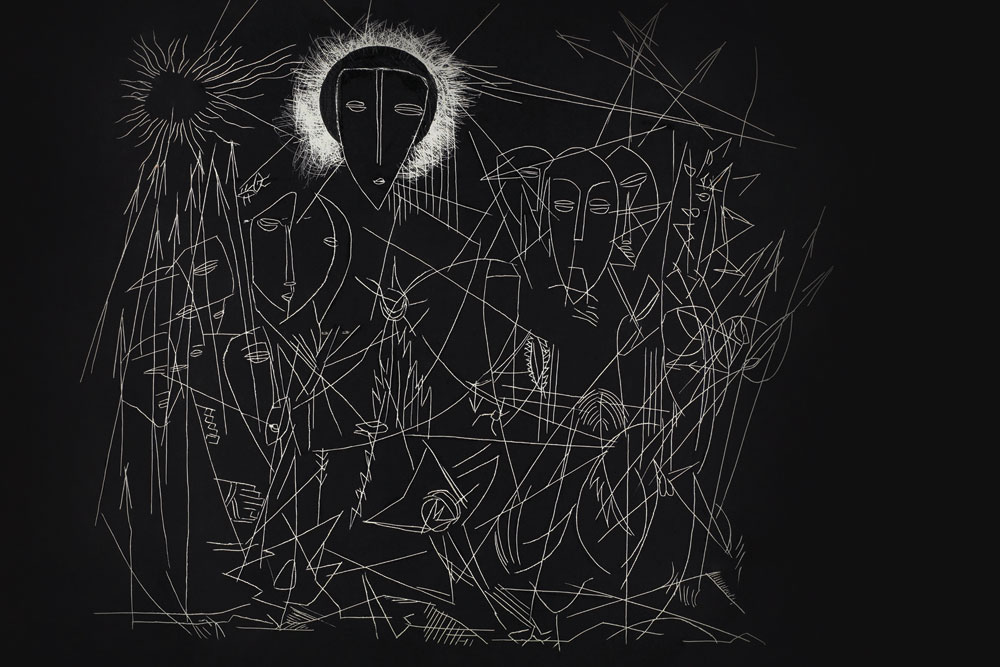 
EBRAHIM ALKAZI IS synonymous with modern Indian theatre. But a visit to Triveni Kala Sangam, Delhi, will compel visitors to rediscover the artist in Alkazi, with larger-than-life photographs, sculptures and art by him gracing its walls. The transformation of the dour gallery seems like a lavish production, which the doyen of theatre himself would have hosted. Not only is the fabulous crucifixion by sculptor Adi Davierwalla recreated at the exhibition, many of MF Husain’s digitised and reproduced set drawings are also present. There are also old photographs of Akbar Padamsee, VS Gaitonde, MF Husain and Davierwalla, who were all collaborators in his productions. The extensions of Alkazi’s persona indicate that every aspect of his art is connected.

Alkazi’s reputation as an institution-builder, theatre pedagogue, champion of artists, art collector, curator of exhibitions, and mentor to generations of actors on stage and screen, has previously eclipsed his identity as an artist. Art Heritage’s Opening Lines, is a historic research-based exhibition devoted to Alkazi as an artist ‘in his own right’. In celebration of his 93rd birthday, it presents many of his paintings and drawings in several media, which have not been on public view since they were originally shown in the early 1950s and the mid-1960s.


Ebrahim Alkazi demonstrated a versatile command over a variety of media and techniques, ranging from watercolor, charcoal, ink, poster paint and carbon tracing to sketch pen

The exhibition has been curated by Mumbai-based poet and cultural theorist Ranjit Hoskote, and has been designed by Amal Allana, the Chairperson of National School of Drama and Alkazi’s daughter. Opening Lines brings to light many of the works that were part of Alkazi’s exhibitions at the Asian Institute, London (1950), the Jehangir Art Gallery, Bombay (1952), and at the Shridharani Gallery, Delhi (1965). In each exhibition, we see that Alkazi demonstrated a versatile command over a variety of media and techniques, ranging from watercolour, charcoal, ink, poster paint and carbon tracing to the sketch pen, marker and frottage. (Frottage is a technique of taking a rubbing from an uneven surface to form the basis of a work of art.)

The exhibition also includes an annotated video work by theatre director and lighting designer Zuleikha Chaudhari comprising archival material. The 18-minute video work is contextualised by three texts, which discuss concepts, strategies and philosophies on representation in the theatre—what are the implications of blurring art and life? How are memory and facts represented? And what are the problems and possibilities of representing both the reality and the truth on stage.

Alkazi’s works have travelled into the public domain after close to 50 years. Hoskote recounts how this happened. “About two-and-a-half years ago, Amal got in touch with me with exciting news. She was going through an old trunk where she found a huge folder still marked as ‘cabin baggage’ from London, with all his drawings and artworks from the 1950’s show. It was like she had found the Holy Grail!” He adds, “The poet Nissim Ezekiel, who was my guru at the time, had told me about the existence
of this folio but we had assumed that it was lost to the world. Nissim had stayed in London and was in touch with Alkazi at the time, in fact one of the Lovers series is a response to one of Nissim’s poem… so when Amal told me she had found this folder, we were both thrilled,” recalls Hoskote.

Plans to do an exhibition around the ‘discovered’ artworks were set afoot and Hoskote started to spend time at the Alkazi archive to build context around the works. “It was sheer amazement to see his works, which were almost 10 years ahead of his peers, since he was richly informed by his exposure through his multiple interests… his preoccupations being with Primitivism, world literature, theatre, and of course, the theme of Christ,” says Hoskote.

The exhibition’s crux is to highlight the polymath’s achievements holistically. “If someone has a hybrid practice, we tend to focus on one and miss out totally on the other, when in fact all these aspects dovetail to make a holistic picture,” says Hoskote.

Alkazi’s works from the early 1950s need to be seen in the historical context of the post-World War II fascination with Primitivism. His references embrace Neolithic drawings, African masks and Oceanic sculpture, as well as the key myths around the hunt, the sacrifice and sexual communion. Personally, Hoskote is partial to Alkazi’s early Primitivism works and the charcoal drawings.

Alkazi’s works from the early 1960s possess a gravitas, as though they had been crafted from shades of night, whether landscapes, seascapes, heads, torsos, or still-life arrangements. “The auratic figure of Christ presides over both phases of activity, as a mythic presence articulating the anguish of the crucifixion and the hope of the resurrection,” says Hoskote.

During his university days, Alkazi veered more towards painting. He even enrolled at two London art schools but found them disappointing. He then decided to pursue painting on his own and he opted instead for a formal theatre training course at the Royal Academy of Dramatic Art. He also decided to use the stage to express himself visually. It is said that he was influenced or rather, pushed by his relative, Sultan ‘Bobby’ Padamsee. They became friends and Alkazi started doing plays in Bombay in 1944-45 with Bobby’s theatre group. The short time that Alkazi, then a student at St Xavier’s College, knew Bobby (who died in 1946), proved to be a defining period.

“Alkazi’s intense theatre activities between 1952 to 61 in Bombay, included staging a series of the classics from across the spectrum of world dramatic literature—from the Greeks to the present day. Side by side, he mounted a series of eight exhibitions called This is Modern Art in Bombay between 1954 and 1957. The message was clear: Alkazi had enlarged and widened his mission to include a promotion of all the arts, not just theatre,” says Amal Allana.

Hoskote is currently also working on an a soon-to-be-published book to accompany the exhibition. An 8,000 word essay by him, which captures the “powerful cosmopolitanism of post-Independence Bombay” and how Alkazi fashioned himself as a man “interested in home and the world,” is already part of the e-catalogue.

Opening Lines rebuilds, layer by layer and through the use of archival and documentary materials from the Alkazi Foundation, the geographical, cultural and aesthetic contexts of Alkazi’s extraordinarily productive life and influential work, when he was still only in his 20s and 30s—decades during which he was already active as a seminal and indefatigable shaper of culture across disciplines, at once elegantly cosmopolitan and robustly anchored in multiple traditions and languages, in Bombay, London and Delhi.