Kapila Venu: A Master of Restraint 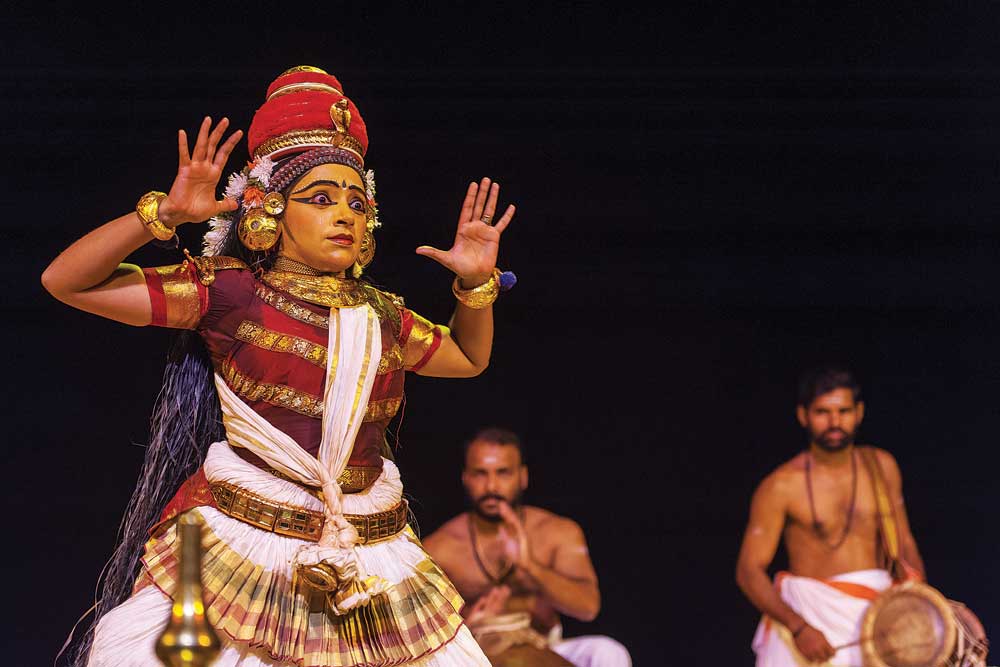 For a petite five-foot something, Kapila Venu makes for a petrifying Narasimha. She sits perched on a stool, serving Hiranyakashapu a bloody comeuppance, gutting him and revelling in his entrails and bones. The tongue rolled back, eyes unfocused, the scene is so rivetingly gory that you can’t look, can’t look away.

It is 3.30 am, and in pre-dawn Delhi, in a darkened hall at the Indian Institute of Technology, lit mainly by flickering lamp, the story of Narasimhavataram is unfolding. The drumming, the dramatic costume and makeup are all eerily effective. But Venu’s transformation on stage is what seals the magic.

In real life, Venu is a lovely, reposeful young woman and the character switch is a tribute to her formidable training as a Koodiyattam artiste. At 35, she is one of the youngest practitioners of an art that prides itself on a 2,000-year-old heritage.

With a highly codified vocabulary of mudras, the very stylised Sanskrit theatre form, Koodiyattam came out of the ritual temple space a little over half a century ago. It is Noh-esque in its slowness and regard for detail, demands rapt attention and rigour from the audience, and altogether not the most accessible of dramatic forms.

Predictably there aren’t crowds thronging Koodiyattam venues even in Kerala, a handful of connoisseurs— sometimes a dozen or less—are often all you’ll see. There isn’t much money to be made in it, and the flush of attention and foreign tours that came with its recognition by Unesco in 2001 have since dwindled.

The few hundred, mostly youngsters, who stayed awake at IIT at Spic Macay’s all-night cultural jamboree as a part of its annual convention were, by usual Koodiyattam standards, a massive crowd. This makes Venu and the handful of artistes of the art a brave young breed.

Of them, she is arguably the best known for her abhinaya skills, which has assured her an ardent fan following outside Kerala, particularly in Chennai and Bengaluru, and especially among dancers and actors. She is also a recent recipient of the Kumar Gandharva award. Recently she was at New York’s Lower Manhattan Cultural Council art centre as part of The Set Up, a multi-year eight-part project directed by dancer- choreographer duo Wally Cardona and Jennifer Lacey in association with various Asian masters. Cardona’s act, surreally named Island Ghost Sleep Princess Times Story Show, is a poetic, erotic gay glove story and is the product of his studentship under Venu.

While most of Venu’s work is traditional, her forays into the experimental have also been successful. So, what is it like to lend the ancient gravitas of Koodiyattam to new-age storytelling? How does she navigate gay love between a moustachioed Indian sailor and a Japanese prince, and not the rarefied love between gods and goddesses, demons and she-demons, epic heroes and heroines?

“Well, it is only technically Koodiyattam because Cardona worked intensively with me, six hours a day, learning its grammar. We even wrote an attaprakaram, a manual, for it. But he is not claiming that it is Koodiyattam, just using the process,” she says.

Koodiyattam needs you to know and watch. Earlier most people had a basic understanding of old texts and traditions. Today they have to learn to appreciate it. And it is happening

Even as a wildly out-of-the-box work, she has no qualms with it. After Cardona, she will perform a traditional item herself. But she wants to rework the fantasy for herself, as a work of ‘pure’ Koodiyattam, after getting the poem translated to Sanskrit. “I appreciate innovation even as I think that our traditional sources and practices are unmatched anywhere in the world. There is always space for new work,” she says.

And how is the story of a love between two men going to go down at a koothampalam , the traditional Koodiyattam venue, even a secular one? “Let’s see. Maybe no one will figure out that it is gay love,” she says, bursting into laughter.

Venu’s home and work turf is a beautiful green corner of Irinjalakuda, around 20 km from Thrissur in Kerala Her father, G Venu, has been running a performer’s studio and actor training centre Natanakairali there since the 1970s. It stands next door to the Ammannur Gurukulam, the Koodiyattam school where the great master Ammannur Madhava Chakyar lived and taught.

The gurukulam is also where Venu began, as a seven-year-old child, training, first with veteran artiste Usha Nangiar and then with the legendary guru himself. Her earliest memory is of going off to sleep waiting for Chakyar to start his legendary, protracted death scene in Balivadham.

To begin with, Venu trained four months at a time, when her school, The Lawrence School, Lovedale (where her mother taught dance) shut for vacation. There were four other youngsters with her, all consummate performers in their own right today. “Everything was much simpler then. Asan (Ammannur Madhava Chakyar) was available to us, we had nothing else to distract us. There was no pressure to go up on stage and excel. Now it is all about showing results, and fast. We would walk to the gurukulam, wait around, discover that Asan was out, walking in the field, watching his cows. I would go searching for him. We would walk back with the cow, chat, start a session. We had no sense of time,” she recalls.

Koodiyattam, in many ways, was not Venu’s natural terrain despite her father’s engagement with it. She was a product of Lovedale’s liberal and cosmopolitan education and she has often spoken about the challenge of returning to Irinjalakuda with its warm but conservative environs, and the rigours of becoming a full-fledged student of Koodiyattam. She has highlighted the difficulties of not being able to fit in, and being too independent and strong- headed to play the compliant ‘penkutty’ (girl) role.

“It was a tough choice but I let go of college and stayed with Koodiyattam because of Asan, his charisma and rare art. I knew from the time I was a child that he was a very special man. The first time I was asked to perform I even ran away but he didn’t give up on me,” she recalls.

Venu’s career took off remarkably well and she carved a niche for herself, especially for her sublime, restrained acting skills. Even the bloodthirsty Narasimha gives himself quiet moments of reflection after and before the deed. Much of this quietude, she says, she owes to her father whose abhinaya training skills are much sought after in the acting schools of the country.

Everything was much simpler then. There was no pressure to go up on stage and excel. We had no sense of time. Now it is all about showing results, and fast

Then there is the Japanese factor. Venu spent five years of her life in Japan working with avant-garde actor-dancer Min Tanaka whose practice pivots around the idea of putting the body to hard labour in a farm. Japan is also where she assimilated the theatre philosophy of the 14th-century Noh master and scholar Zeami Motokiyo who believed in minimal theatre, spare props and subtle and underplayed action and emotions.

“But I have to point out that restraint is not new to Indian traditions either. The gurus of yore were masters of restraint. The excesses and overplay came in much later,” she says.

Among Venu’s most acclaimed performances outside the traditional repertoire, both directed by her father, are Sita Parithyagam from Kalidasa’s Raghuvamsa and the epic enactment of Shakuntalam. The first particularly is the closest one can come to a box-office hit in Koodiyattam. “Everyone connects with it. It shows Rama losing his mind in grief over Sita, himself abandoned and alone. And we use imagery that is rich with nature and Sita’s ties to the forest,” she explains.

Despite the international and national acclaim, Venu is acutely aware of how difficult it is to make a decent living as a Koodiyattam artiste. The most common venues pay an insulting pittance, sometimes not even that. The ritual spaces are still inaccessible to performers like Venu because of caste constraints (only Chakyars, the traditional caste assigned to the art, and Nangiars, or women of Nambiar clans, are allowed to perform here).

That leaves the public festivals hosted by temples and the modern stage. The former pay abysmal fees for traditional performers and that lack of generosity extends to the surviving legends of the art, men and women who have dedicated their lives to Koodiyattam.

“I am doing fine. I don’t perform for free and I insist that my accompanists are paid well so they make a decent living. But there are some fine, very talented young performers out there who are having a tough time. Even the richest temple in Kerala will offer Rs 1,500 for a performance. If you are lucky enough to land a job at an institution you might earn around Rs 7,000. How do you run a home, pay bills, raise a child on that kind of money?” Venu asks.

Within Kerala, she says, she now looks for interesting, intimate spaces with aware and knowledgeable audiences. “Koodiyattam needs you to know and watch. Earlier most people had a basic understanding of old texts and traditions, even if they didn’t know Sanskrit. But today they have to learn to appreciate it. And it is happening, I do see familiar faces return time and again, making a steady connection with the art. There are audiences in Bangalore who will travel to Irinjalakuda to take their understanding a step higher,” she says.

Venu was and still is a regular on the lecture-demonstration (lec-dem) circuit. In fact, her solo career outside Kerala began when at Spic Macay’s lec dems she would perform as her father explained. It was at one of these early sessions that Spic Macay’s founder Kiran Seth sought her out and started giving her assignments other than the ones she had with the Irinjalakuda troupe. At IIT Delhi, she also held workshops for rank beginners, patiently walking them through the principles of Koodiyattam. Not having been to college, she says, she finds it energising to deal with youngsters.

But with an impressive decade of work and travel in her bag, Venu says she now wants to stick close to her roots. She is a mother of a two-year-old and increasingly loath to stay away for long stretches. When he was an infant, she was often seen on the leafy lanes around her home, carrying him in a sling and travelling between home and the gurukulam.

“I don’t have to conquer new venues, be aggressive about my work. I want my work to become more grounded in and around my home and gurukulam. Maybe renovate the studio space where people can come and watch me, return to a performer’s traditional lifestyle where you stayed anchored to a specific koothamablam,” she says.

Her dream is to choreograph the fascinating life story of the literary figure Karaikal Ammiyar, one among three female Nayanmars devoted to the Saivite cult. And she wants to keep it in Tamil, as dramatic a language as Sanskrit she says. “It is a story full of dramatic potential and mysticism,” she adds. Both elements right up her street.