Bose Krishnamachari: Through a Mirror Darkly

For Bose Krishnamachari, art is life itself, and his solo exhibition in Kolkata shifts from minimalism to maximalism with sensational ease. He tells Nandini Nair why he can’t separate people from his creations 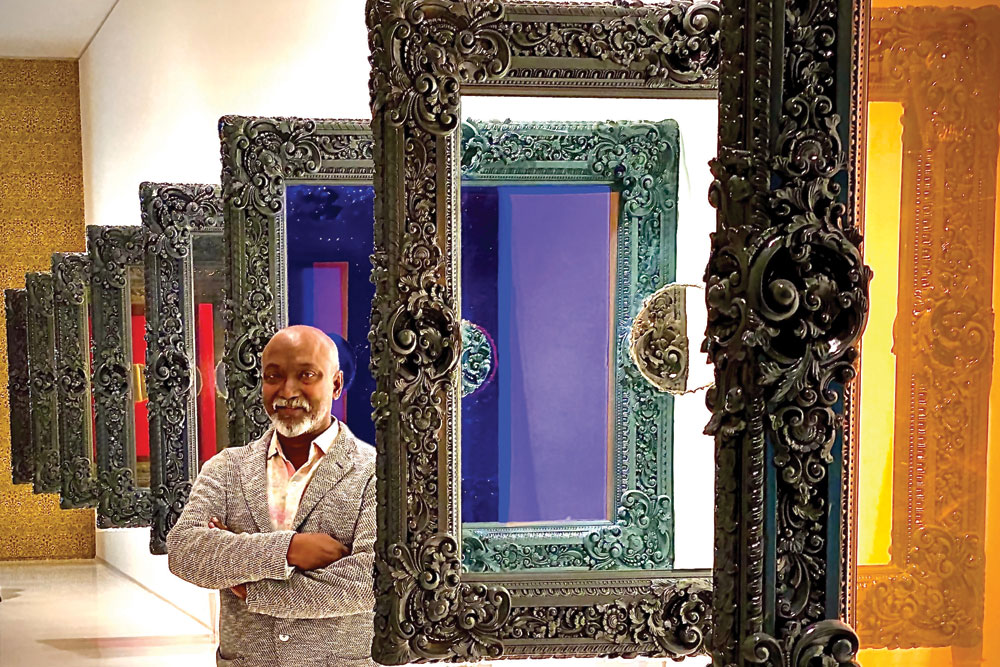 
IT IS A MONDAY morning and Emami Art (a contemporary art gallery) in Kolkata is supposed to be officially shut. But Bose Krishnamachari who has mounted a show at the centre has issued strict orders to the management—do not stop the students, make sure they are permitted to enter. The gallery had stayed open this Monday to allow journalists to access Bose’s solo The Mirror Sees Best in the Dark, just before the Christmas break, and Bose had used that as an opportunity to throw open the doors to his younger fans and admirers, who had told him that they will be visiting all the way from Santiniketan.

To spend time with the 57-year-old artist is to recognise this generosity of spirit. For him art making is not an enterprise in and of itself, instead it is the first steppingstone to reach a wide and vast public. Art does not end with hanging a work at a gallery, instead the conversations around the works and the responses of viewers engage him, as he believes culture is wealth and every individual is a creator. For him a gallery or an art show is not a site of display, instead it is a laboratory for reverie and dialogue. Bose has democratised art in India by perceiving both layperson and gallerist as his partners, as he has extracted art out of chichi arcades and into scenic ports and grotty gullies. He is not only an artist, he is also an advocate of art for all, most evident in the fact that he is the co-founder of the Kochi-Muziris Biennale (KMB). In his vision, a worker’s glove, a babu’s tiffin dabba are as museum worthy as a signed portrait of Frank O Gehry. He truly believes “Everybody can be an artist, everyone is an artist.” He spells out his all-encompassing understanding of art, “When I say art—it is not a small thing—it is life itself. I do not separate myself from the art making, or being an artist. People are the most important aspect of it all.”

For the last decade, Bose has been at the helm of India’s premier art event. He was the artistic director and co-curator of India’s first Biennale in 2012, and has since then been both its midwife and parent having overseen four editions of the Biennale so far. It is thus little surprise that it has taken him nine years to mount a solo exhibition, The Mirror Sees Best in the Dark, which also marks 30 years of Bose’s own art practice. The current exhibition follows his mobile museum project LaVA (Laboratory of Visual Arts), which spanned from 2006 to 2011.


“When I say art—it is not a small thing—it is life itself. I do not separate myself from the art making, or being an artist. People are the most important aspect of it all,” says Bose Krishnamachari

LaVa once again embodied Bose’s desire to share and spread the wealth of our culture with students and connoisseurs of art as it was a mammoth archival project, which shaped itself into a “temporary-contemporary” installation. The archive comprised books, CDs, DVDs and knickknacks that had moulded his own tastes in cinema, architecture and philosophy. With LaVa, he helped reconceptualise a gallery from a viewing space to a site for cultural interaction.

For Bose, curation and art making are not distinct practices, instead they are strokes in the canvas of life. He does not subscribe to outdated romantic notions of artists like Van Gogh working in isolation in their studios. He says, “I believe that reading day-to-day things, working at home, cooking at home, meeting friends, visiting a café and having conversations are all part of your art development. The daily practice is not just painting itself. It is seeing life.” The toil of routine, whether it is reading or writing or housework, all contribute to his practice of art. This might be his first major solo in nearly a decade, but his creativity and the methods of creation have never ceased.

A VIEWER STEPPING into Emami Art today will at once be immersed in a sea of sensations. This is a world of both the excess of gilt and gold and the minimalism of paper and perforations. Bose explains, “I use the art language of minimalism and maximalism that I see in contemporary life and my own life and I believe that extremities coexist, so I use the two languages.” The first work that the viewer is likely to encounter is Bose’s papers with Braille, which uses the idea of touch to convey a visual message. He has used the pared down language of Braille, which does not allow for any excess, since his first shows in the early 1990s.

This show highlights Bose’s mastery over various materials. Across nine different works, he has used constituents ranging from graphite, wood, metal to steel, brass, granite, as he believes, “materiality in art projects is an important science.” As the title suggests, the mirror is a crucial motif of the show as for Bose the mirror “symbolises obsession” by drawing you in and then entrapping you. In his work titled Mirror Sees Best in the Dark, he uses the traditional handmade Kerala Arunmula metal mirror, where opaque discs of copper are converted into reflective surfaces. The mirrors are mounted in the centre of large ornamental wooden frames. The beauty of the work is that these are not two mirrors stuck back-to-back, rather they are a single reflective surface. Bose explains, “I like to use the talents of local crafts people, so I use this mirror. The mirror for me not just reflector, it is also a receiver. It will receive anything in front. It will almost inhale you. Both sides are one mirror. Like one coin.”

Bose created this entire show for this particular space in Kolkata as he was attracted by its scope and depth. In a column for a weekly magazine titled ‘My Kolkata Conundrum’ (December 2018), he writes how he had initially committed to the inaugural show at the Emami art space which was being reimaged and designed by Mumbai’s designer-architect-collector Pinakin Patel. The demands of the Biennale that year however staunched his promise. Emami Art would go on to open with a ‘spectacular show’ of Dashrath Patel’s collection of paintings and prints, graphics and photography. But a year later, good to his word, Bose would return to the gallery with nine monumental works.

“When we look at these words—nationalism, narcissism—it is a kind of dictatorship. We are all addicted to something, and that is a dangerous zone,” says Bose Krishnamachari

The CEO of Emami Art, Richa Agarwal adds, “Bose has been with us since our inception and his support means a lot to us. His encouragement to us as a team has helped us with much needed direction that a young team looks forward to. This particular show, his solo after nine long years, especially created for Emami Art, is not only prestigious but very close to our heart.”

The viewer follows a path that leads them to an enclosed cavernous space lit in a golden hew, which Bose describes as the “sanctum sanctorum”. In the works collectively titled Obsession, we see gilt frames which encompass words like ‘Narcissism’, ‘Nationalism’, ‘Technology’ and ‘Casteism’. The frames are mounted on a wall draped in wallpaper reminiscent of the chambers of kings. Bose has drawn the patterns on the wallpaper free hand, which have then been reproduced using technology. He says, “It is a kind of maximum ornamentation that I wanted to create here. When we look at these words—nationalism, narcissism—it is a kind of dictatorship. We are all addicted to something, and that is a dangerous zone. We have to sensitise ourselves to what is happening in our country and other parts of the world. When we take religion itself, maybe it started as a great idea, a better way of living. But once you are obsessed with certain kinds of philosophy, I think that is taking everybody into a dangerous, poisonous path.” Through the heavy ornamentation of the frames and the positioning of the words, Bose warns us of the perils of regionalism, capitalism and racism. Art critic Ranjit Hoskote in a note on the show writes, ‘Bose explores the thresholds at which potentially unifying concepts like nationalism can become unhealthy obsessions, dividing the world into Us and Them, injecting toxicity into collective life.’ By mounting these words in the womb of the show Bose warns us of the dangers of these isms which have tightened their grip over society.

Born in Kerala, Bose grew up with a “certain kind of faith”, before moving to Bombay and to the JJ School of Art in the late ’80s. He has been in Mumbai for more than three decades and feels grateful to the city for both its art world and the people on its streets. In Bombay, he has spent time working, studying and living in the studios of Tyeb Mehta, Akbar Padamsee and Sudarshan Shetty, amongst others, experiences which proved pivotal to his work.

He says, “I was born in a certain kind of faith, but I believe that is the most dangerous kind of thing. I am not a narcissist. Everybody is getting into the zone of you need to keep distance from what you like. Parents, or love, or god, it is always good to have some distance. Not just you, the other is also important. Selflessness is most important in our time. I don’t see that very much in our lives.”

None of the works in the gallery carries captions adjacent to the work itself, which allows viewers to create their own interpretations and arrive at their own conclusions. While viewers can choose to pick up a brochure on the show at the entrance, which includes the titles, this freeing of the works from art speak underscores Bose’s faith in the rasika. He says, “I don’t want people to read the works with titles. It is best if you explore it. If you give ideas, there is no invention. There is pleasure if we find our own meaning in it. It is no fun if all the information is given on a silver platter.”

As Bose leads one from exhibit to exhibit, the conversation meanders its way to KMB. The first edition was a real struggle, I ask. “All the editions are a struggle,” he replies with a chuckle. The 2018-19 edition proved particularly challenging as it followed just months after Kerala’s August floods. But for Bose postponement of the Biennale was out of the question. Speaking with passion, he says, “We should not give up cultural projects. It gives so much confidence to the local and foreign public. It gives them a certain kind of pride that cannot be bought. I discussed this with our CM, and said, ‘We cannot give up, we will make it happen. We have to be part of the confidence building.’ It is the responsibility of the artist community to commit ourselves to a cultural project like that.” He cites the example of Prospect, New Orleans, an art biennial conceptualised after Katrina, in 2008. Here was an art festival that provided a platform to rebuild a city, as the founders had seen first-hand the social and financial benefits that biennial exhibitions can yield for their host cities. He adds, “Art for me, I believe, is like medicine. It cures.”

(The Mirror Sees Best in the Dark will run at Emami Art Gallery, Kolkata, until March 10, 2020)