Subversively from the subcontinent 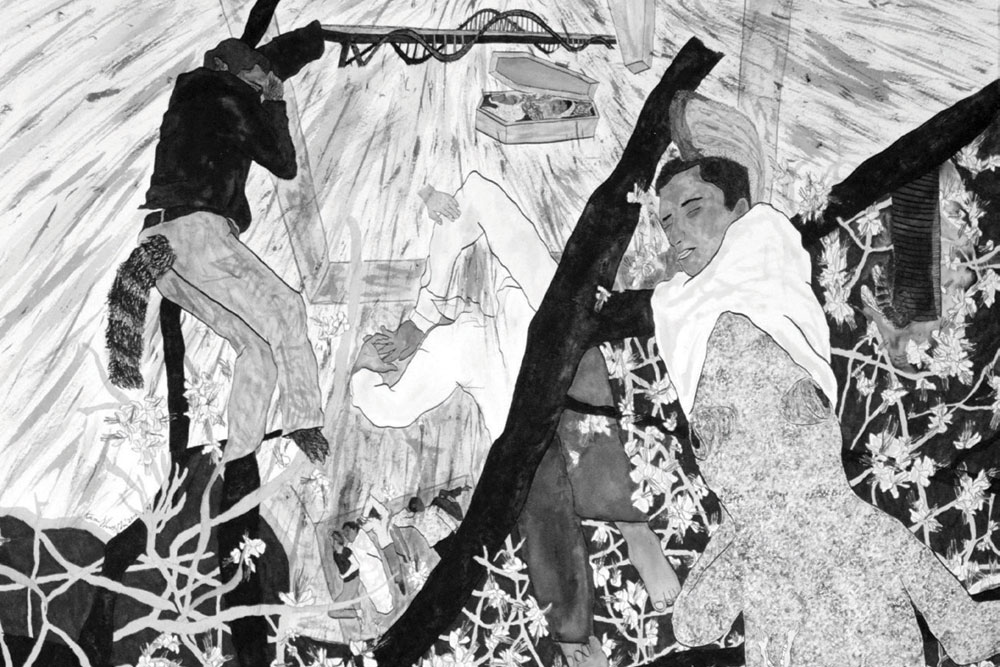 HOW DO WE experience any notion of collective humanity when what we share with our neighbours is a sense of self that is either marginalised or partitioned or both and more? ‘Incessant migrations, bloody skirmishes at the border, divisions between groups within each country, and the partitioned and divided selves of individuals themselves become the bonding factor in the entire subcontinent,’ writes Yashodhara Dalmia in the preface of her curatorial essay accompanying the show, The Edge, which marks the tenth anniversary of Shrine Empire Gallery. The repercussions of institutionally-sponsored inhumanity— the fracturing of territory, the continuing process of the ‘othering’ of the less privileged, the vantage point of precariousness and the mundane-ness of violations inflicted upon the already disempowered, and the reiteration of the associated hierarchies that uphold the status quo—form the crux of Dalmia’s visual treatise.

It is a mark of consideration that Dalmia chose to title the show The Edge, thereby deliberately not seeking recourse in more conveniently notional terms like ‘shadow lines’ or similar metaphors of geographical dystopia. She advertently offers instead a simple two-syllable paradigm in an effort to narrativise broader thematic preoccupations shared by artists from India, Pakistan, Bangladesh, Nepal and Sri Lanka, the immediate cartographic locus that is imagined as the subcontinent. ‘The works forefront the chasms that continue to widen for the ‘other’; the lives of those who belong to minority religions, the lower castes or the marginalised poor,’ she writes in her essay.

Four excerpts from the series Moreover by Karan Shrestha frame the show’s general tonality; greeting visitors as they enter the corridor leading to the wall text that follows Zoya Siddiqui’s Melancholies Of The Migrated, a cluster of photographs that accompany first-hand migrant accounts alongside drawings that seem like formal, line-based investigations into the materiality of borders as cartographic entities. Born in Kathmandu and raised in Mumbai, Shrestha’s series comprising ink on archival cotton rag paper perform as arresting psychological landscapes conveying the loneliness of various forms of alienation. The imagery, relentlessly monochromatic, is bleak and dystopian, communicative of ever- widening rifts and their impending un- bridge-ability. It is as though the viewer, too, is located at the edge of the same precipice as the figures being looked at. Siddiqui’s deceptively accessible Melancholies of the Migrated extends the fragility of these dislocated selves by offering the viewer an overt narrative that vocalises the isolation of displacement, positing exile through the prism of estrangement, with no hope of finding one’s way back into the comfort of ‘home’.

Nataraj Sharma’s Orchid Platina Phase 2, an expansive (72 x 96 inches) mixed media oil on canvas work deftly suggests the smallness of the human figure in the face of a post-industrialised world, where a man, seated in front of a stool upon which lies a plate of jalebis, is completely alone in a landscape colonised by structures meant for inhabitation. Gigi Scaria’s The Truth About Gravity that hangs in close proximity echoes class- based isolation and hierarchical set-ups by suspending three modes of inhabitation (possibly high- rises, shanties and slums) apart from each other, yet connected through the edifice of a flag at the top that emerges from a pole that connects three structures to the earth. The truth about gravity, perhaps, is the certainty with which all three may crash onto the earth with a whimper, bang, and thud; or perhaps it is about what holds these three societal classes aloft yet alienated from each other.

Scaria’s acrylic on canvas converses with Varunika Saraf’s Nothing Happened Here; watercolour on Lokta Paper pasted on un-primed canvas textile; a similarly constructed metaphor for the various manifestations of marginalisation, and Suhasini Kejriwal’s Break, a mixed-media work exposing the world of spare parts and second-hand objects that perhaps retain more utility as consumer goods than war or religious refugees. In placing these works in dialogue with each other, Dalmia furthers the scope of their signification, providing fertile imaginative ground even for works that could otherwise be seen as performing within the site of the literal, like Tayeba Begam Lipi’s Once Upon a Time and Ravinder Reddy’s Dhobi. The former is a dressing table made of stainless steel razor blades, the latter a female head atop which rests a laundry bundle. Both these works convey feminine edges, testifying to the dangerous and sometimes vertiginous nature of gendered identities.

SUMEDH RAJENDRAN’S steel sculpture, Between Sharp Air, bridges the nuances between these and several other works in the show in how it incorporates the movement of either a human figure or a set of figures caught in a loop between the desire for movement and the repression of border-like structures that confine and cage. It offers a very immediate metaphor for the rigidness of constructed borders and their dehumanising effect; much like Sujith SN’s watercolours on paper, while also suggesting the imaginative, enduring aspects of the human spirit that must keep recalibrating its situation in order not just to survive but to possibly find contentment. This is where art is still able to invest itself with deviant, subversive potential; because liminality, Dalmia posits, is not necessarily a physical site but an imaginative, imagined one that contains the breadth of our desires. Yes, there is the quiet darkness of the worlds that artists like the Pakistani, Waseem Ahmed depicts, or Sri Lankans, Anoli Perera and Jagath Weerasinghe in which the human figure is still reeling from the many violations inflicted upon its body and person-hood, but there is also the transgressive universe of Nepali artist, Youdhisthir Maharjan, who literally cuts out the filling within the font of published books in works like Anatomy of the Spirit and Song of Love and War, interspersing these pages with his own textual or gestural interventions. There is also the idea of geographical ambiguity suggested in excerpts from Munem Wasif’s Land of Undefined Territory, part of a much larger series that documents the topography of a stretch of land situated on the blurred edge of a boundary between India and Bangladesh. Wasif’s work, like the neighbouring series by Nicola Strippoli Tarshito with Gond artist Anand Kumar Shyam, has a utopic core; if we can learn to re-map the natural world in a manner that renounces the notion of ownership we may inhabit it better.

Veer Munshi, himself a displaced person from Kashmir, offers us an alluring sculpture of a deer whose constitution mimics the papier-mache craft characteristic of his native region. The lithe creature seems caught in the headlights; a possible comment on the innocence of those statistically registered as casualties of war, and the very physical and psychological consequence of anguish and helplessness.

The Edge is a deceptively intense show, one that fulfils its premise with visual élan. It is immersive, yet succinct, and is not tokenistic towards any participating nationality. It neither suffers from the dangers of being too literal nor revels in navel-gazing ambiguity or loquaciousness. You are left with lingering thoughts about the human condition and its ability, beyond its inherent aggressiveness, to accommodate fractured realities.