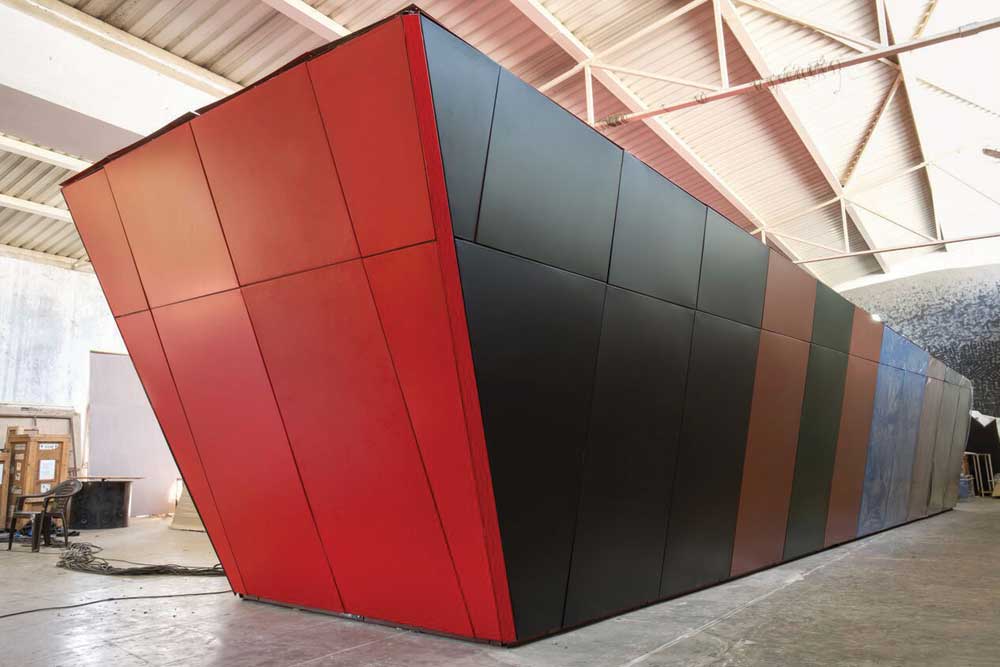 IT’S A SPRING evening at Farm No 8 in Aya Nagar, off Mehrauli- Gurgaon Road. The art cognoscenti of Delhi have gathered to preview an exciting new artwork due to make its way to Mumbai. We enter a dark boat-like structure, which has seating for about 40 people on either side, and wait for something to happen. When everyone is seated, a voice suddenly booms out, search-lights circumambulate the dark interiors, LED and DMX lights flash, sirens wail, and we are spirited away to Mumbai’s Colaba dockyards. It is 1946 and we have been called in to witness the scarcely-known Bombay Mutiny that was carried out by the Royal Indian Navy (RIN) as part of a protest by Indian seamen on board the HMIS Talwar.

Over 200 mutinous seamen and civilians were shot by the Empire’s cavalrymen in a bid to ‘contain’ the protest. The uprising was condemned by Mahatma Gandhi and Vallabhbhai Patel because of its unplanned and violent nature, but it was supported by local leaders such as Aruna Asaf Ali, who sided with those who laid down their lives. Over the years, this incident has been buried under a blanket of silence.

That is until now. This installation, titled Meanings of Failed Action: Insurrection 1946 brings alive this forgotten piece of history. It is a collaboration between Vivan Sundaram, cultural theorist Ashish Rajadhyaksha, professor at East London University, Valentina Vitali, and sound artist David Chapman. The exhibition is open at the Coomaraswamy Hall, Chhatrapati Shivaji Maharaj Vastu Sangrahalaya in Mumbai till March 25th.

The installation that was created over months consists of a metal outer-casing that is a modern interpretation of a boat with a beautifully polished exterior and various cuboid surfaces. This structure, created with the help of Sundaram’s fabricator and designer Girish Kumar, is a sound-proof box that houses the sound and light piece. Rajadhyaksha’s research was scripted into a 40-minute piece that consists of faux interviews and soundscapes, poetry and reconstructions of the incident, collaboratively by Vitali, Chapman and Sundaram. The piece is informative but also moving and leaves one with a sense of great loss at not knowing the sacrifice made by the RIN members. The work additionally has a 40-foot mural created from multilingual newspaper snippets, which were installed onsite at Coomarawamy Hall, not at the preview in Delhi. It evokes the historical and political landscape of the time in which the mutiny occurred.

Sundaram’s work has always delighted in collaborations. His vast oeuvre is characterised by a continuous dialogue and exchange with researchers, filmmakers, playwrights, theatre actors, soundscape artists and photographers. Insurrection may be viewed as a culmination of many years of engagement.

“I have always been fascinated in digging up what is forgotten or what is often not spoken about. This piece comes after my collaboration, 409 Ramkinkers, that was both a tribute and a revisiting of the works of legendary sculptor Ramkinkar Baij. I collaborated with the Vivadi Theatre Group, Anuradha Kapur and students from the Delhi College of Art, among others,” says the 73-year-old Sundaram of the mammoth work that immersed the viewer in theatre, still and mobile sculptures, sound and light. It took place at the Indira Gandhi National Centre for the Arts in 2015.

Sundaram created re-takes on Baij’s sculptures like Mill Call and Santhal Family that are iconic pieces installed at Santiniketan’s Kala Bhavan. While the originals are made with cement and are full of movement and life, Sundaram took a step further by creating mobile sculptures from objects like mechanical parts and his trademark LED lights. “I did this because I wanted to comment on Baij’s love for movement inspired by Calder (Alexander Calder was an American sculptor known as the originator of a type of moving sculpture),” adds Sundaram. The theatrical tableaux enacted by a group of 30 Vivadi actors (an independent theater group headed by Anuradha Kapur) brought to life the adversity that Baij lived in, while Baij’s contemporaries, Binod Bihari Mukherjee and Nandalal Bose, were given monologues narrated by theatre personalities. The whole production of 400 installations comes together over two hours and is an exhaustive look at the many modernisms that Baij stood for. It was considered one of Sundaram’s most ambitious projects.

Not all his projects were always this big, though Sundaram—who began his artistic journey as a painter—is known for his propensity towards artistic alliances. “I think my first collaborative work can be traced back to 1987, to a mural I did at Shah House with my dear friends and fellow artists Bhupen Khakhar and Nalini Malani. I merged well with these artists as our works shared common ideology and we had grown close over our times at the Kasauli Art camps that were organised in the 1990s,” recalls Sundaram.

This was followed by the project Collaboration/Combines, which opened in 1992. In this work, he commented on the nature of bringing together different disciplines like painting, sculpture and kinetic art. After this, the iconic Memorial, a large installation piece that looked at the communal 1992-93 riots after the demolition of the Babri Masjid, was a different kind of collaboration. Here he worked with found images from media.

However, especially with this work, he makes a distinction between being an artist and an activist (he is part of groups like Sahmat). “My work is never directly political. I would say I do tend to present my comments in a more distant and abstract documentary format,” he says. The sculpture of the prone man encased in a triangular structure in Memorial, lit by a fluorescent tubelight, which forms the centrepiece of the installation, is no doubt taken from a documentary. But “I have worked on it to the point of abstracting the form and presenting it as an almost ‘objective’ piece of evidence,” he explains.

Teasingly called the artist who loves re-takes, Sundaram is also well-known for his Re-Take on Amrita, which were digital photographs that explored the complex relationships of the Sher-Gil family, his aunt, Amrita Sher-Gil, and his mother, Indira, through a series of montage and digitally-produced collages based on his grandfather Umrao Singh Sher-Gil’s negatives. Be that as it may, these images are more intimate and the ‘collaboration’ is between his family members. One could insist that they are different from his outwardly political works that look at the subaltern and the disenfranchised.

“I have also been fascinated by the boat as a structure for many years. If you look at my work, Shelter, 1994-99, that showed at Nature Morte in Delhi and Sakshi Art Gallery in 2000, the structure of the boat makes its first appearance there,” says Sundaram. The white boat of Shelter is propped up on wooden oars and viewers are invited to sit under the upturned boat to view the video works and interviews that are played on a monitor. If one were to trace back this work, then the beginning of this most ambitious project, Insurrection, may be spotted there.

Like 409 Ramkinkars, this work too has a durational aspect, and one can deduce from this that Sundaram likes to keep his audience involved, calling for their time and attention in a manner that is quite demanding. And why not, given the dedication with which each project is developed. A few in the audience who are reluctant to switch off their phones and eke out time from busy schedules do find the long durations trying. However, those who choose to stay, savour and digest the work in its entirety are amply rewarded.