Ten artists in conversation with the world 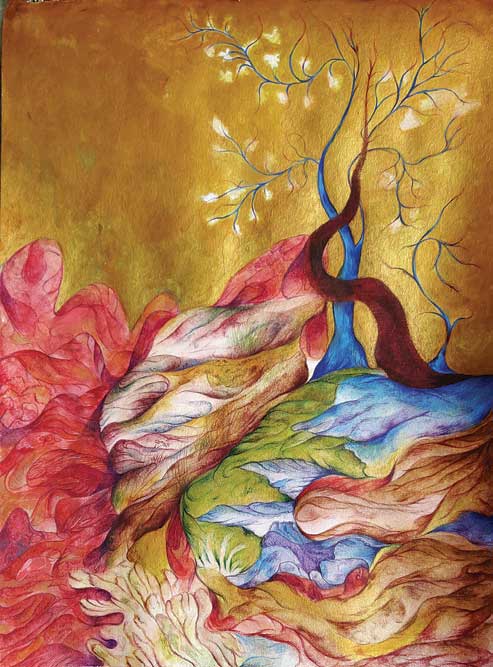 FINDING BEAUTY IN the traditional may be a flawed premise since it idealises the past. Which is why the ten artists in Revisiting Beauty have put a ‘contemporary’ twist on our tradition of miniature paintings and its notions of beauty. The exhibition, curated by gallerist Tunty Chauhan, is part of a series of exhibitions planned on the theme of beauty over the coming year. The curator poses the question: ‘Is beauty a ‘bad’ word in the age of cutting-edge, angst ridden art?’ The artists have responded with artwork that reconfirms the belief that art has a certain intrinsic relationship with beauty, even if it is a critique of the conventional notion.

The exhibition features veterans like Gulam Mohammed Sheikh, V Ramesh and Nilima Sheikh whose works have attained a spiritual level without losing their political edge. Artists such as Manisha Gera Baswani, Desmond Lazaro and Manjunath Kamath bring in the angst of those in the middle of their artistic journey, while younger artists like Anindita Bhattacharya present work that is laced with rage against patriarchy, yet masked by beguiling beauty. The show also features Pakistani artists like Aisha Abid Hussain, F Zahra Hassan and Wardha Shabbir who bring in a cross-border dialogue about tradition and politics.

What is interesting about this show is that at first glance it is impossible to locate the artist’s geographical location or position, because they all reference miniatures in some way. This common point of reference dislocates their work from narratives of ‘modern’ or ‘contemporary’. But with deeper explorations, various subtexts emerge and the precise nature of the work can be decoded.

“Beauty is a subjective notion, one that is influenced by the specifics of culture, class, race, religion, gender. Which is why I think it might be difficult to zero in on one universal notion of beauty,” says the Visakhapatnam-based artist V Ramesh. His hyper-realistic watercolour- on-paper paintings endeavour to capture the beauty of everyday objects. In his photograph-like works, a lowly plastic bag changes its avatar when filled with jasmine flowers, a garland of roses transforms an ornate wooden chair into a symbolic ‘divine seat’, and a common fruit like a banana becomes a devotional object when placed in front of an ornate oil lamp that is lit before an absent deity. “These paintings are offered up, much in the same manner that the Bhakti saints offered their life up to the divine one, as an act of complete surrender,” says the art professor, who has developed a narrative vocabulary, rooted in Indian sacred and literary culture.

On the other hand, an artist like Anindita Bhattacharya subscribes to the notion of beauty being universal. “A painting or a work of art is sensuous, but when it transcends the realm of sensory experience, beyond its formal aspects towards sublimity, to evoke an aesthetic experience in the viewer, it becomes an object of beauty,” says the 31-year-old. Her work takes off from the stylistic qualities of the miniatures but reinvents it. The intricately cut trellis paper invokes the screens of Mughal architecture, while a politically potent narrative simmers below. Gymnasts perform acrobatics, while leaders like Gandhi march stoically through a sea of men for whom of violence is a casual act. Over the years, Bhattacharya has been fascinated with ornamentation and patterns. Her search for identity is often a response to right-wing political mobilisation and monolithic cultural constructs about the idea of India.

Gulam Mohammed Sheikh’s watercolour Thinking Beauty in the Times of Terror, is a similar veiled statement about the troubled times we live in. Sheikh, who is a painter-art historian, is known for referencing images from across history whether it is a demonic figure from the Persian miniatures, or a saint from pre-Renaissance painting set against the backdrop of his native city Baroda. Sheikh brings them into conversation with each other, creating a narrative that speaks of acts of violence and kindness from across history. “Occasionally, I place an image upon another image to depict a journey of the spirit on the landscape of the face. There is mysticism, and at the same time, the device of reversal is used in an almost surrealist mode, quizzical and explosive,” says Sheikh.

Manjunath Kamath’s Untitled series of self-portraits done in the miniature style bare his trade-mark humour and jocularly place the dilemmas of artistic creation before the viewer. In contrast to these intimate works, his self-styled mandala, Almost There, is a grand narrative that questions the myths and prejudices created by Western academic ways of seeing. “When I was studying in college we were taught not to conform to conventional notions of beauty. It was considered not ‘contemporary’ to use bright colours like gold and fluorescents but as a result of my engagement with Indian miniatures I am drawn to the use of brilliant colours and decoration,” says Delhi-based Kamat.

Senior artist Nilima Sheikh similarly addresses tradition with her works on tempera, Saganer paper and wasli paper, materials traditionally used by miniaturists. Her paintings can be seen as the subtle and skillful weaving of traditional and contemporary life, which evoke beauty and poetry. The Dust still Uneasy on Hurried Graves speaks of the ongoing unrest in Kashmir. “The series on Kashmir was ambitious and I hope to put together works that read and refer to various accounts of Kashmir historical and contemporary life, to try and put together configurations to rework my fairly confused or at least mixed feelings on Kashmir,” says the artist referring to works like The Country Without a Post Office and Reading Agha Shahid Ali.

For this exhibition, Delhi-based artist Manisha Gera Baswani digs deep into her personal life. She puts forward a mystical landscape that is not peopled by figures. It is an evocation of both beauty and pain, which refers to the city she lives in (Delhi) and her own inner struggle through her husband’s heart surgery. In Heart to Heart, the pinpricks that dot the surface of the landscape are emblematic of the process and the marks left upon the body, while Circulating Hope resembles the arteries and walls of the heart. ‘Hungry for beauty in the mundane, I bring home this bounty of Gods, this overlooked gift and house them in the four-walled garden I call ‘Home’,’ writes the artist in a statement on this work.

Lazaro who is a fine miniaturist and realist painter surprises with his non- figurative work, which evokes displacement, immigration and home, through maps traced out on golden slate. The takhti (small wooden board with a grip on top) are similar to those used in madrassas . As an immigrant himself Lazaro influences range from a stained-glass window of a church in North England to the miniatures of India.

GIVEN OUR SHARED histories, notions of beauty for artists from India and Pakistan are not very different. Their common concerns are terror, death and loss, even though their references may differ.

In a series titled World’s End, artist F Zahra Hassan posits a world where good and evil are in constant struggle with each other. Where the demon and angel of ancient Persian miniatures wrestle in the clouds. In another series titled Annihilation, she has painted the outline of a skeletal head over portraits of princes, empresses and emperors, indicating that beauty and death go hand in hand. “The process of beauty’s intentional and purposeful manifestation through form, colour, pattern and shape is what I call art,” says Hassan of her process.

Wardha Shabbir creates a world of mythical flying creatures, beasts and birds that populate this fantastical floating land that tells of survival, death and beauty. “My work is an investigation of the dilemma that surrounds beauty in many social and political contexts. Mystical references acknowledging the undertones of a flourishing dystopic world steeped in the discourse of cruelty, violence and power are consciously masked with the elements of beauty which then become contemporary miniatures,” says Shabbir, who is based in Lahore and is known for her transformational mythological images.

Aisha Abid Hussain’s sculptural book installations are invocations of pain and beauty through the calligraphic script in both English and Urdu. Her work tells a story about the effects of global cultural interactions over the latter half of the 20th century. “I comprehend beauty as pain. The desire to be meticulous is closely associated with it. The struggle to achieve perfection, which is a beautiful idea, has always been a source of pleasure, but as no pleasure can be attained without tasting pain, nothing beautiful can be created without seeds of pain being planted in the heart of the creator,” says Hussain, who lives in Lahore, having graduated from Goldsmith’s University in London.

Writes Dr BN Goswamy in the catalogue text: ‘The ten gifted artists whose works go into this show see the world around, and inside, themselves, each in his/her own manner. And they set up their own dialogues with that world.’ This exhibition is testimony to the fact that questions of beauty are just the starting point of a conversation, and not the end.