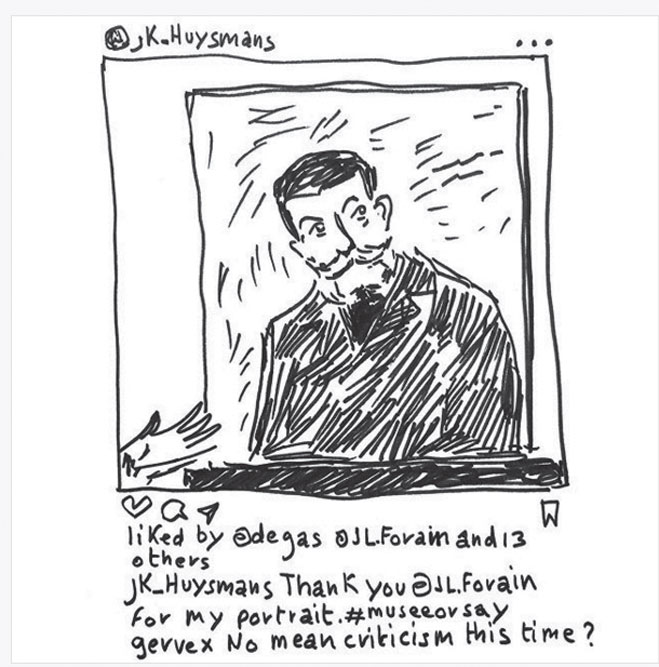 
THE NEW YEAR has commenced with a brand-new job profile being created in the world of art. Earlier this month, the Musée D’Orsay in Paris, an iconic museum which houses one of the most extensive collections of 19th-century art in the world, appointed an ‘Instagram artist-in-residence’.

As the second decade of the 21st century begins, even an institution as grandly formal as the Musée D’Orsay, built out of a former railway station in 1986, is keen to embrace the changing ethos of viewing art. A visit to any public institution of art, be it a gallery or museum, is almost impossible to imagine now without the sight of ardent Instagrammers and selfie-takers, jostling for the perfect angle. So why not push the idea a step further?

Jean-Philippe Delhomme, the French artist who has been chosen for the role, is expected to ‘depict an artist as a social media user’ every Monday throughout 2020 and post it on the museum’s Instagram handle, one report said. The concept may sound intriguing, but those who are aware of Delhomme’s work would get why he has been bestowed this honour.

In 2018, Delhomme published a book based on a curious personal project that was sparked by an idiosyncratic question: what would the Instagram accounts of famous artists from the past look like if they had access to social media in their lifetime? The result was Artist’s Instagrams: The Never Seen Instagrams of the Greatest Artists, a collection of quirky and humorous sketches made by Delhomme, featuring some of the legends from the history of art.

From Frida Kahlo to Paul Gauguin, Delhomme picked some of the greatest names from the constellation of stars and imagined how they might have behaved if they had access to social media, especially to Instagram, when they were alive. Alongside his sparkling wit, in evidence was Delhomme’s sharp understanding of the artistic temperament: the fears and insecurities, vanity and pomposity, that drive the creative process from its inception; the petty jealousies and anxieties that beset the life of even the most exalted geniuses.

Based partly on recorded facts from the biographies of individual artists and some inspired speculation, Delhomme came up with a bunch of acute ideas. His Gauguin, for instance, shares an image of his naked Polynesian lovers with the hashtag #AboutLastNight. It’s not hard to see the great artist indulging in such a flippant activity, long before the #MeToo movement set the standards right.

Piet Mondrian, on the other hand, boasts of his collaboration with Ikea’s kitchen line. Given Mondrian’s unmistakable influence on modern design, the ubiquity of his style and colours on a range of objects, from bathroom tiles to tote bags, this seems like another inevitability. All the artists chosen by Delhomme were, as he said in an interview, “famous to the point of creating mythologies around themselves.” Indeed, they are “the gods of Instagram.”

The same principle is being followed for the project at the Musée D’Orsay. Delhomme is to pick one name from the glittering array of artists each week and subject them to his ‘retro’ scrutiny. For the first entry, which he shared with his 34,000+ followers on Instagram last week, he chose Joris-Karl Huysman, a 19th-century art critic, whose portrait was painted by Jean-Louis Forain in 1878. The image, rendered in a rough-and-ready pen-and-ink sketch, shows 15 likes, including one by Edgar Degas (Forain’s contemporary), another by Forain himself. There is one comment from a user called ‘gervex’, presumably the artist Henri Gervex, which says, ‘No mean criticism this time?’

While Delhomme’s work is meant to inspire a chuckle, the Musée D’Orsay’s willingness to promote it implies there’s more to it all than a silly joke—it’s also an excuse to arouse the curiosity of visitors about relatively obscure names. Since it came into being 10 years ago, Instagram has become the world’s most popular photo-sharing site, with over one billion active users a month, as of 2018 data. For a generation, it’s not enough to appreciate beauty any longer without the right Instagram filter to see it through. Travel is of no joy if it isn’t chronicled with inventive hashtags. A trip to a museum or gallery needs to be documented with #artwork (trending at 90.9 million posts at the time of writing). Is it any surprise that #artistsoninstagram is trailing right behind it with 36.3 million posts?

One unavoidable flip-side of a democratising platform like Instagram is that it also brings in hoi polloi: amateur water-colourists who dabble with paint and exploit the hashtag culture, alongside serious-minded professionals whose life and livelihood are tied to creating art.


Jean-Philippe Delhomme, the Instagram artist-in-residence, at Musée D’Orsay, Paris, is expected to depict an artist as a social media user every Monday throughout 2020

For the latter, though, having access to a medium like Instagram can be richly rewarding. Not only does it provide an opportunity to artists to be curators of their work, Instagram also helps them build their personalised archive of images, create an online museum that is in their control, and helps them reach out to a global viewership running into the millions that no exhibition “IRL” (in real life), however large its footfall, can ever guarantee.

Since the last few years, there are periodic rumblings about the ways in which Instagram is affecting the dynamics of the art world, especially its commercial aspects. With no gallery or auction house acting as an intermediary, young and emerging artists have direct access to buyers via Instagram now. While the advantages of working with a gallery are several, it is not easy for a relatively unknown name to find one to represent their work, especially in these times when the market remains volatile and unpredictable. It is like a boon, under the circumstances, to be able to show one’s work to a worldwide viewership—and even be able to sell to some—without having to worry about cumbersome bureaucracy, commissions or cuts.

While reliable data on art sales through conventional channels like auctions and galleries is possible to unearth, little is known about the transactions that happen through informal avenues like direct sales on Instagram. But one thing is clear: selling on Instagram comes at a price for the artist—that of having to divide their attention between the intensity of working in real-life and the need to jazz up their feed with strategically taken photographs of work in progress or a selfie with a completed work.

To go back to Delhomme’s contention: artists, no matter the time they live and work in, thrive on creating mythologies around themselves and their work. And Instagram is the ready-made publicity portal that encourages such behaviour—often to the extent of turning it into a pathology. Among millions of viewers of art, especially those fortunate to visit some of the iconic establishments around the world, the urge to Instagram their experiences run as high as the rush that comes from their sheer proximity to greatness—sometimes the former surpasses the latter.

Last year, authorities instituted new rules to stop overcrowding since the craze of visitors bearing cellphones to photograph, or take a selfie with Leonardo Da Vinci’s masterpiece Mona Lisa at the Louvre museum in Paris was getting out of control. The number of visitors to the Louvre declined as a consequence, but that’s fine by Jean-Luc Martinez, the president and director of the museum. “We are not looking to welcome more visitors, but to welcome them better,” he told a news portal.

Instagram’s influence on the art world isn’t straightforward and may get even murkier as concerns over plagiarism and copyright infringement grow. However, as a medium that facilitates an interaction between artists, artworks and viewers, it plays a role that is likely to remain crucial. Marcel Duchamp, who scandalised his contemporaries in the early 20th century by putting a urinal in an art gallery, believed that a work of art is not complete without its recipient. Instagram is the live wire that connects the two with seamless ease.