NS Harsha evokes many worlds within one in his art 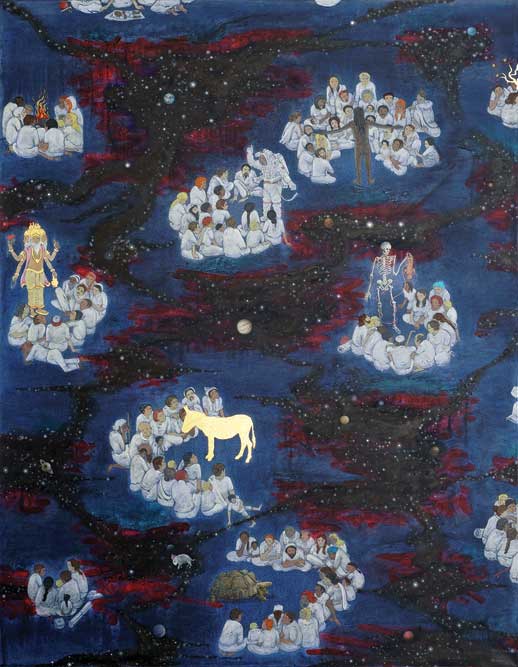 THE POWER OF love is such that it can make ‘one little room an everywhere’, the poet John Donne wrote. Standing inside the Victoria Miro gallery in north London two weeks ago, I remembered this line in another context. It was art, rather than love (some may say the two aren’t that different), that created the illusion of a universe being held within the four walls of the white cube.

Artist NS Harsha, who has a show at the gallery till May 18th, is a conjurer, gifted with a talent for evoking many worlds within one. Born in 1969, he lives and works in Mysore, in the southern state of Karnataka, which has inspired one of the most vividly imagined microcosms in the history of literature: RK Narayan’s Malgudi. Like the writer who bestowed dignity to the ordinary and unremarkable, Harsha too transports everyday scenes, people in the streets or objects found amidst the jilted squalor of life to a context that is global, though not shorn of its local specificities. Over the last two decades, he has shown his work across the world, from Asia to Europe to the US.

The entrée to the London exhibition is at once arresting. A group of monkeys made of fibreglass sit on different levels of an iron plinth, conjoined by their serpentine tails, as each creature points a finger skywards. In their gesture is perhaps a touch of mocking fatalism, but that’s hard to ascertain from their inscrutable faces. The stance appears once again, like a refrain, in one of the paintings, titled Smears to weave her everyday. In it, a sari- clad woman points at the heavens as she stands next to a cluster of knitted mats. Are we reading too much into a posture that could well be a facetious joke? Maybe she, and the monkeys, simply point to the work on the next floor of the gallery, where the show continues? To look at Harsha’s work is to grapple with many such questions—about the nature and purpose of art, the barrier that separates it from life, and the meanings we end up ascribing to it.

In another painting, a tableau called Warmth, small crowds sit by makeshift fires, enacting a scene one encounters frequently during winters in the subcontinent. Yet, in spite of its all-too-familiar subject, the composition also assumes a uniquely whimsical character, with each group paying homage to an odd entity: the four-faced deity Brahma, one of the ur-gods in the Hindu pantheon; the tortoise from Aesop’s fables who beat the hare in the proverbial race; an astronaut attired in his suit; a golden ass emitting light; a naked fakir preaching sermons; and a skeleton holding a newborn baby upside down, which is also umbilically attached to it.

What are we to make of this strange assemblage? Harsha has a story for every element that comes into his art, embellished with personal anecdotes. But even without being aware of the specific biographical, historical, social or mythical undercurrents in his work, it is possible to be in thrall to the ambiguity of their meanings. If his art seems to be marked with visual clues that lead us towards one direction, there are just as many traps to mislead us too.

As Harsha mentioned in an earlier interview, the “Arte Povera” movement, which swept across Italy in the 1960s and 1970s, is a key influence on his practice. Artists of this school believed that a return to simple objects and direct messaging was imperative, as opposed to art for art’s sake. They felt compelled to make works that mirrored society in all its quotidian details, bridging the gulf between art and life. In Harsha, the idea finds a distinctive resonance. Although he tends to use familiar (and found) objects—textiles, iron rods, cardboard boxes, mirrors, leaves, wooden figurines, and so on—he defamiliarises the context in which these are introduced. What we end up seeing is not always what it really is. To look at his art is, therefore, like a lesson in careful looking.

Harsha has a fondness for the ‘visual flatness’ in his works—which is how they look like ‘when viewed from far’. But, ‘upon closer inspection’ , he explains, ‘they reveal hundreds of stories and mysteries

For instance, to fully appreciate Harsha’s work, it is required to step up close, or move away from, a piece. His art, intensely cerebral as it is, not only interacts with the mind of the viewers but also with their bodies, demanding distance or proximity. In a piece for The Guardian in 2009, the artist described his fondness for the ‘visual flatness’ of his works—which is how they look like ‘when [they are] viewed from far’. But, ‘upon closer inspection’, as he explained, ‘they reveal hundreds of stories and mysteries’.

This is a useful lens to look at Harsha’s oeuvre, though the latter has varied much in style and substance over the years. As the eye is trained closer on the paintings on canvas in the show at Victoria Miro, a pattern seems to emerge, which flows into some of the other works, rendered on textile, which are hung around the room on the ground floor.

In Smears to weave her everyday, a patch of black paint, speckled with planets and stars, emerges from the ground below the woman in the sari. The background to Warmth is also entirely made of the same pitch-black galaxy. In Untitled (A Deep Lie Series), the motif is articulated on pieces of textile, black as the blackest of night skies, with the solar system painted across them, then hung with pegs on clotheslines. In this ingenious arrangement, Harsha audaciously captures the vast expanse of the universe within the walls of ‘one little room’, making it ‘an everywhere’. The repetition of this celestial imagery also lends to these exhibits a mystique, as well as a unity of vision, just as the pointed finger does to the others.

The endless void signified by the blackness of these paintings on fabric take on a multiplicity of meanings as we proceed to the upper level of the gallery. There, against a long wall, stands the pièce de résistance of the show, Reclaiming the Inner Space, which was shown at the Sydney Biennale last year to much acclaim.

A work of tremendous daring, it is made of hundreds of upturned cardboard boxes that have been emptied out and stuck on the background of a mirror. In the centre of this installation is a splash of black paint, thrown in the style of Jackson Pollock’s action painting. Harsha says it took him several trials to get the shape and spread of this massive splotch right. From up close, the form looks almost premeditated, as though every spatter was carefully touched up with a brush. But as you move away, this angry daub seems to radiate a chaotic energy. Splashed across rows of boxes, it appears to cleave a gaping wound through their cardboard surface.

The darkness that emanates from this black paint is dappled with stars and planets of the cosmos that we encounter earlier. But it also perhaps signifies the black hole of the consumer economy into which the world is being sucked. As we stare at this many-layered piece, we see bits of our own faces reflected in the mirror behind. If the work compels us to confront our agency in feeding the insatiable hunger of the capitalist machinery, we are also made to reckon with the inner hollowness of our dreams and wishes.

Finally, as a nemesis to the destruction caused by decades of consumption without conscience, a herd of hundreds of miniature wooden elephants emerge from the interstices of the boxes and the paint. Custom-made for this work, these carved animals bring in their wake a promise of reclamation (as the title promises)—not only of the environment and its resources but also of that inner space within ourselves that we struggle to fill with material possessions.