The Ramayana as a visual narrative with contemporary urgency 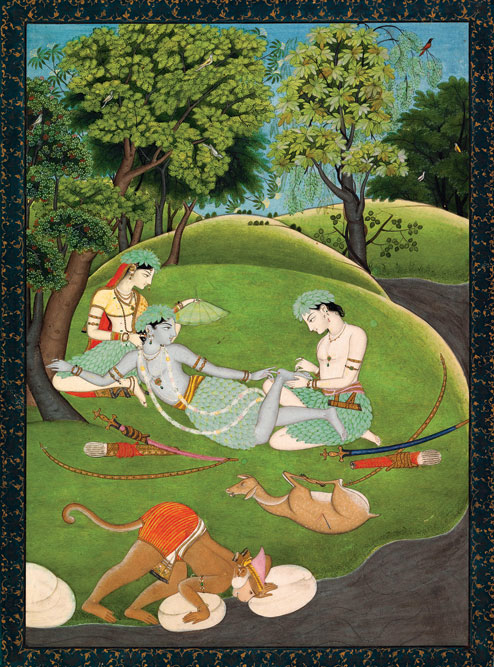 Rama, Sita and Lakshmana begin their life in the forest, Kangra, c 1800-1810 (Courtesy: The Metropolitan Museum of Art, New York)


THE METROPOLITAN Museum of Art, New York, functions as a time machine. Across its polished marble floors and high-rise ceilings, time, space and geographical boundaries cease to exist. Artworks dating back centuries, belonging to diverse cultures—some languishing in obscurity—are reintroduced in mainstream conversations through new exhibitions.

Thus, is the case of Sita and Rama: The Ramayana in Indian Painting. Not only does the exhibition focus on the Indian epic, it also revisits a selection of 30 rarely-seen artworks made by skilled artists belonging to Pahari and Rajput courts in the 17th and 19th centuries. Each painting, vivid and well-preserved, depicts scenes from the epic. “The Met has more than 60 works that relate directly to the Ramayana,” says Kurt Behrendt the Associate Curator of South Asian Art. The exhibition of only half of these works, however, was “driven by a desire to show works of the highest quality that visually frame this great epic.”

The Pahari and Rajput art traditions had a long-standing relationship to Mughal art. In fact, these regional painting styles flourished in the 17th century in the midst of a crisis. In 1658, Aurangzeb ascended to the throne of the Mughal Emperor. Unlike his predecessors (Akbar, Jahangir and Shah Jahan), Aurangzeb felt that the coterie of Mughal painting ateliers that existed in the Mughal court was extraneous to his empire. His interests lay in architecture, which led him to commission projects like the Pearl Mosque, in Delhi’s Red Fort.

Aurangzeb’s reign, therefore, witnessed the decline of Mughal painting workshops, leading the former imperial artists needed to seek patronage elsewhere. “Artists trained in the Mughal painting workshops started to seek patronage across Rajasthan and, to a lesser extent, in the Punjab hills,” explains Behrendt. “Personally, I find this moment extremely interesting as these artists struggled to work in the various Rajput and Pahari stylistic traditions. So, we see a commingling of styles that ultimately leads to a variety of creative new ways of representing religious and secular subjects important to these new patrons,” he says. The Rajput ateliers primarily focused on illustrating the Bhagvat Purana, Ramayana, Gita Govinda and Ragmala series.

In the collection of 30 artworks depicting the Ramayana at the Met, each one stands out for the regional atelier’s unique stylistic characteristics, formats and ingenuity. While some of these rare works belong to the Rajasthani courts of Bikaner, Kota, Udaipur (Mewar), Bundi and Malwa, others were produced in workshops in the Pahari kingdoms of Mandi, Kangra, Guler and Basohli.


Each of the artworks stands out for the regional Atelier’s stylistic characteristics, formats and ingenuity

One of the paintings is that of Ram, Sita and Lakshman, lazing across the sun-bathed grasslands. Titled Rama, Sita and Lakshmana Begin their Life in the Forest (1800-10), the painting belongs to the Kangra region. It depicts Ram resting his head in his wife’s lap, while his brother tries to pluck a thorn from his foot. The scene is deeply intimate, and it turns the unassuming viewer into a voyeur. The gods’ leaf-trimmed garments and head-dresses (reminiscent of the Greek laurel wreaths), a trussed deer and laid-down bow-and-arrows, are reflective of their lives as residents of the forest. In the foreground, Hanuman, with his arched back and saffron-hued loincloth, is seen drinking the river water. The colours have a soft, powdery glow.

Unlike the figures depicted in other artworks in the exhibition, the protagonists in this particular painting are truer to the human form—the treatment of the eyes and other features are more refined and tender, and there is an emotional relationship established between each character. “The figural type can generally be traced back to the Mughal painting tradition, but in these Pahari works, there is more emphasis placed on the sentiment,” says Behrendt. “By the early 19th century, when this painting was done in the Kangra kingdom, generations of related artists and their workshops had been developing this wonderful and extremely refined style. Great emphasis was placed on nature and how nature was a reflection of the emotional state of the protagonists.”

In Rama, Sita and Lakshmana Begin their Life in the Forest, for instance, “the emphasis is on [the gods’] youth and this is why they have such idealised bodies. In the 17th and 18th century, deities like Rama or Krishna often appear in very accessible ways as they were meant to appeal to devotees. Bhakti devotionalism stressed participation, attachment, fondness and love for god,” notes Behrendt.

A departure from this Kangra art tradition is the Shangri Ramayana series, six of which are on display at The Met. The series (watercolour on paper), provides a fascinating insight into understanding the early styles of Pahari painting. This style is easily recognisable by its strong, idiosyncratic features, like the use of flat colour fields, for instance. In the painting titled, The Monkey Prince Angada Steals Ravana’s Crown (1700-1730), which was made in the kingdom of Jammu (Bahu), the sky is a slim band of cerulean, demarcated by a hazy lace of silver. A rectangular block of yellow anchors the composition overall, featuring an airborne Angada, the monkey prince, in the act of nicking, a very angry ten-headed Ravana’s, crown.

Another work from the Shangri Ramayana series, Mourning the Assumed Death of Rama and Lakshmana (1700-1730), relays the aftermath of the incident when both Ram and Lakshman are injured by an attack by the demon prince Indrajit (Ravana’s son) and momentarily slip into unconsciousness. The painting depicts the mourning human and monkey allies. It is fascinating to note how all the figures have been ingeniously and neatly compressed into a singular frame. “These early paintings are remarkable for their vitality and creative use of space and pattern,” explains Behrendt. “Fields of saturated colours, often Indian-yellow, but also greens and deep blues fill the backgrounds of these works”.

The paintings carry incandescent colours, which invariably draw you in. Many of these colours have been made using minerals such as lapis lazuli, iron and copper oxides, as well as organic pigments. Often, the canary yellow, seen in paintings belonging to the Pahari courts, was the ‘Indian yellow’, which Behrendt refers to. Historical evidence suggests that the Indian yellow was made by feeding mango leaves to cows. Their urine would then be collected and processed, eventually making a rich, luminous colour. You will also notice that each painting is acutely detailed—back in the day, the fine brushes used for contouring and detailing human figures, were made using “hairs from living squirrels or kittens” which were preferred.

The Rajput paintings stand out significantly from the works produced in the foothills of the Himalayas. A family of four beautifully painted folios belonging to a Ramayana manuscript (dated 1605), for instance, carry accompanying verses from the epic on their reverse. Among them is The Court of Ravana which depicts Ravana holding a durbar gathering with his son Indrajit. The saturated colours of navy, emerald green, blood red and gold are mystifying. If you look closely, the demons illustrated in this painting are reminiscent of the demonic figures often seen in old Persian works, primarily those belonging to the Safavid dynasty. The distinctly Persian-looking figures and architectural features (such as intricately patterned walls with flower motifs) are also featured in a sibling folio titled, The Death of King Dasharatha, which depicts Dasharatha’s wives, with their bowed heads covered by translucent veils, grieving the death of their husband.

These leaflets reflect the influence of 15th-century Persian painting style, which was predominant in the Mughal ateliers (Mughals originally belonged to eastern Iran), while the colour palette and compartmentalised compositions reflect Rajput art traditions. In keeping with the interests of Akbar, however, most Ramayana manuscripts belonging to this period carried Persian texts. What sets these particular folios apart is the fact that they instead carry Sanskrit inscriptions at the back. It means that these illustrated pages were made at the behest of a Hindu patron.

‘[These paintings’] provenance from the Datia collection and the existence of pale traces of drawings on the reverse in a Datia style suggest that the patron may have been the wealthy Bundela Rajput noble Bir Singh Deo Bundela (d. 1627),’ states The Met’s website. Historically, Bir Singh, a vassal of the Mughal empire, is known to have shouldered the attack against Akbar with Prince Salim (who later became Emperor Jahangir). During his prime, Bir Singh employed artists belonging to the Mughal painting workshops, who weren’t as popular or skilled as those patronised by Akbar. This practice was known as ‘sub-imperial patronage’.

In both the Pahari and Rajput art traditions, it is interesting to observe Sita’s representation. How is she depicted? A painting from the Shangri Ramayana series, titled Indra Offers Sita a Plate of Payas, a Heavenly Sweet’ (1710-1740) shows Sita seated on a pale-pink carpet in Ravana’s palatial gardens. Protesting against her abduction, she has refused to consume food. Across a bold plane of yellow, panelled by lush green trees, the scene imagines the appearance of god Indra before Sita. Indra has been sent by Brahma to offer Sita kheer (payas), so that she doesn’t starve before Ram rescues her. Nidra, the goddess of sleep, has accompanied Indra on his mission, who puts a sleeping spell on the demon guards that surround Sita.

The painting, more than anything else, relays Sita’s ardent resolve and her ability to not feel threatened by the demon king. Her back is upright, firm with intent; her eyes are hopeful. She is not in a dishevelled state or wailing. “Sita regularly appears in Pahari works as protagonist within the story. She is not shown as vulnerable, though often her love for Rama is evident,” says Behrendt. “In one painting in the current rotation she is shown defying Rama when he orders her not to join him in his exile. In another instance, after her abduction, she refused food.” In the Rajput painting tradition, however, Behrendt continues, “Sita seems to be more often shown together with Rama in more devotional contexts. This contrast between Pahari narrative and Rajput iconic depictions is found with many other scenes, as these two traditions are quite different.”

Also on view is a rare, late 19th-century artwork titled, Hanuman in his Tantric Five-headed Pancha Murkha Form, belonging to either regions of Rajasthan or Gujarat. “Very few tantric representations of Hanuman are known, as they seem to have been made for a specific ritual,” says Behrendt. In this particular watercolour work, “projecting above Hanuman’s crown are five subsidiary heads: a goose (hamsa), snake, mule, lion, and horse, which is a different configuration from what is recorded in the tantric texts of the Panchamukha-Hanumat-Prakarana and the Shrividyarnava tantra. In the texts, the five heads are recorded as a human, lion, Garuda, boar and horse and this is the most common configuration depicted in artworks.” Also on display is a well-preserved, 18th-century cotton scarf or rumal (acquired by The Met in 1931), showcasing exquisite embroidery done using silk, tinsel and metal threads from the Chamba region. Such rumals were originally used to cover offerings to deities in temple rituals.

The Ramayana is an important Indian epic, without which the pantheon of South Asian literature would remain incomplete. Each of these artworks not only offers an ingenious visual form to the epic, but also reflects the refined craftsmanship, colour palette and stylistic experimentation of the regional artists 300-400 years ago. These narratives, anchored in strong visual language—suffused with mythology, moral diktats and role of kinship—resonate with people even today, and will continue to resonate for generations to come.

(Sita & Rama: The Ramayana in Indian Painting runs till February 23, 2020, at The Metropolitan Museum of Art, New York)