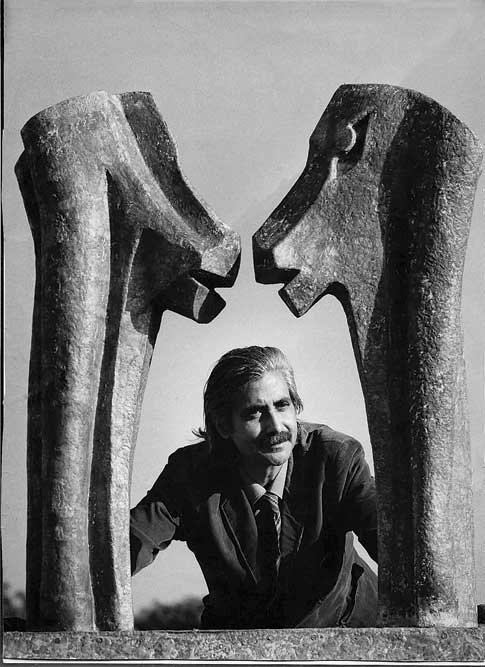 AS ONE WALKS AROUND J-23, Jangpura, Delhi, home to the Amar Nath Sehgal Private Collection—and perhaps, the only single-artist museum in the country—one’s eye is constantly drawn to the wall of drawings on the second- floor. There is a segment devoted just to faces, and it feels as if with every stroke, the artist has imbued the works with a palpable sense of loss. It is this feeling of acute anguish that unites all of Padma Bhushan awardee Sehgal’s work—whether it is his pastels, tapestries, poems or signature bronze sculptures.

In each of the creations, one can see the artist relive and reinterpret memories of Partition, and of all the horrors that he witnessed during an arduous journey from Pakistan to the Kullu-Kangra valley. He joins Satish Gujral and Krishen Khanna in their quest to use material and form as a means of reconciliation with the past. While Gujral paints scenes of suffering, Khanna often looks back at the idea of the home that was, and scenes from everyday life, once untouched by religious differences and hyper nationalism. Sehgal, on the other hand, looks at art as a means of catharsis, as a means of constantly expunging the pain—of exhuming and exorcising the demons, in a way.

Sehgal (1922-2007) grew up in a large family in the army cantonment of Campbellpur, Pakistan. He was the fourth in seven siblings and had a deep affinity with art since childhood. In media interviews, he often described himself as a lonely child, who, left to himself, would sit and meditate. However, due to pressures of convention, he ended up pursuing a degree in Industrial Chemistry, and even worked as an engineer in Lahore between 1944 and 1945. But he couldn’t stay away from art for long, and Sehgal enrolled at the Mayo School of Art and Lahore School of Fine Arts.

However, the year 1947 changed the fabric of his life, when his family was forced to flee in the middle of the night. In that chaos, no one realised that the youngest brother had gotten left behind. That realisation set in only once the family neared Shimla. “So, Amar Nath Sehgal told everyone to proceed ahead, and he went back to his village in an army truck. The anti- climax was that the brother had meanwhile reached Shimla. But according to me, this journey was most impactful for him,” says Shruthi Issac, curator-archivist, The Amar Nath Sehgal Private Collection. While artists like Khanna and Gujral undertook the journey from Pakistan to India during Partition once, Sehgal had to undergo it thrice. “Imagine the kind of pain he must have seen over and over again. And these works address that. In another set of drawings, you can see a cluster of people fused together. These images too come from seeing people being put together,” she says.

In 1948, Sehgal moved to New York to pursue art, but on his return, three years later, he worked relentlessly to revive folk art and theatre in rural areas of Punjab and Haryana. During his extensive travels across the globe, he found a natural affinity towards victims of natural calamities and conflict. Sehgal rendered these human emotions of helplessness, hope and kindness in a unique visual vocabulary, especially in his bronze sculptures. There is a lyrical quality to these works, in which forms seamlessly flow into one another. At no point does the solidity of the bronze overpower the works, and there is a lightness and balance to each of these creations.

From the 1950s till 2005, he was aggressive with mediums. He used whatever helped express his feelings best. For instance, he worked with gold, and created a set of 15 works using 18 carats of gold for a bank in Luxembourg.

And, in the 1970s-80s, when the Government started supporting a lot of craft, one witnessed collaborations with master weavers to create tapestries. The artist also had other collaborations over time—with a screen printer in New York for his rendition of Ganesha with pronounced human attributes. He also worked with an Arabic calligrapher for his exhibition in Jeddah, when he created wood cuts such as The Target and Call for Prayer and got verses from the Qur’an calligraphed in the same.

Also, interesting are his renditions of the New York skyline, moving from earlier drawings of Central Park to later works, in which buildings come to resemble people. While most of Sehgal’s drawings are devoid of colour, you can see vibrant hues make an appearance in the works from the 1970s-80s. There is copper, burnished red and hints of green, seemingly inspired by the autumnal colours in Luxembourg. There are also evocative and humanised representations of myths from the Mahabharata and Ramayana—Bhishma Pitamah on a bed of arrows, Ganga appearing to Shantanu for the first time, Maricha, the golden deer, and more.

There is more to Sehgal than his large-scale public works and drawings. Each of the 15,000 to 18,000 documents, poems and sketches at the museum highlights his deep engagement with world politics

However, throughout his life, he maintained that bronze, “the eternal material”, was his main medium. That is perhaps because he studied engineering and metallurgy, and could understand this medium thoroughly. “In order to create, the sculptor has to become one with his material, seeking to petrify his emotions or mental idea right through the long, laborious process of creation,” Sehgal once told critic-curator Gayatri Sinha in an interview. Four of his bronzes—Nari, Alap, Lovers, Head with Horns—which were acquired by The Oberoi Hotel, New Delhi, are considered representational of his style.

THE GOVERNMENT OF India, among other world institutions and hotels, was one of Sehgal’s biggest patrons, and one can see 20 commissioned sculptures and installations across Delhi NCR. There is the Flight, from the 1980s, at Akbar Bhawan, and The Captive at India International Centre. The latter is a replica of the work designed by Sehgal in 1986 to highlight the United Nations’ opposition to the apartheid regime in South Africa. Then, there is the Dragon at the Indira Gandhi National Centre for the Arts, which took the artist four years to complete and, with its jagged teeth and claws, embodies the overpowering tendency of man to politically and economically exploit the downtrodden. Also, significant is Aiming for Excellence, a stone sculpture at the DDA Yamuna Sports Complex.

However, one of the most ambitious public works by Sehgal was created in 1962 for the Vigyan Bhawan Annexe. Author Mulk Raj Anand wrote about this 480 x 1680-inch mural: ‘The metal used here weighed approximately three tons. The moulding of it into recognisable symbols of the variegated life of India, was an enormous task, in view that it had to project from the wall about four inches, in order to show off the montage to effect.’ Anand felt that the lyrical low of one form into another, within the limits of figurative representation, required a high talent for mobility, balance and grace. It was this skill and futuristic handling of materials that made Sehgal one of the avant-garde Modernists.

The Vigyan Bhawan mural is significant for several other reasons as well, as it led to a legal battle between the artist and the Government of India. It all started in 1979 when the mural was removed during renovation without informing Sehgal or seeking his permission. The artist chose to file a case against the Government, leading to a 13-year-long battle. It culminated in a landmark judgement by the Delhi High Court in 2005, upholding the moral right of an artist over a work. The case was decided in Sehgal’s favour, who was awarded damages. The Government was also asked to return the mural. This continues to be the benchmark case for artist’s rights and protection of an artwork’s integrity in India.

Meanwhile, there are two other significant public works that Sehgal did, but which the team at the museum is still looking out for in order to maintain and restore them: one, which used to be at the Qutub Hotel, and the other, Monument of Aviation, which used to be at Palam Airport. According to Rajan Sehgal, how a 1,200-kg work could get lost, beats him.

As one looks back at Sehgal’s vast oeuvre, one realises that there is more to Sehgal than just his large-scale public works and drawings. Each of the 15,000 to 18,000 documents, poems and sketches at the museum highlights his deep engagement with world politics, and a sensitive and perceptive response to key events that took place during his lifetime. On the ground floor of the 1,550-sq-ft space, one can see a cluster of images of Sehgal with a host of personalities such as Jacqueline Kennedy, Yuri Gagarin, Indira Gandhi and French president François Mitterrand, among others. There is also one with Coretta Scott King, wife of Martin Luther King Jr, who had come to Delhi to inaugurate the sculpture, Monument to Love and Non-Violence (bronze, 1963). “Apparently, one of the figures is supposed to be Mahatma Gandhi and the other one Martin Luther King Jr, and they are engaged in a dialogue,” says Issac. This sculpture, which now resides in the museum, features a gentle trickle of water flowing from the two figures. “In between, when there is a fluctuation in electricity, one slows down and the other starts talking loudly. It’s very engaging,” she says with a smile.

Within the archive are also letters from former US presidents Richard Nixon and Jimmy Carter. “He had gifted a work called To Space Unknown to the White House, which is now in the Smithsonian Museum,” says Issac.

Not many know that Sehgal had also been a part of the nation-building process for the UAE, with several exhibitions in Abu Dhabi and Dubai. There are also images of him in Luxembourg, which served as his home for 24 years. “He came in contact with officials from Luxembourg during the 1965-exhibition at the Museum of Modern Art Paris, and in 1979 he came to the conclusion that he should move there with his family. But even then, he didn’t lose his connect with India, and J-23, Jangpura, continued to serve as his studio in Delhi till he passed away in December 2007,” says Issac.

If one has to excavate Sehgal’s practice layer by layer, one will find his deep-set belief in humanity and the power of the subconscious at the heart of it. “The basis of all my work lies in the unconscious. It is symbolic of themes and emotions dormant within my own system. These come to the surface only through great concentration. And it is ultimately the artistic imagination which gives shape to the feelings,” he said in a 1977-interview to The Indian Express, titled Unconscious Moulds his Bronze.