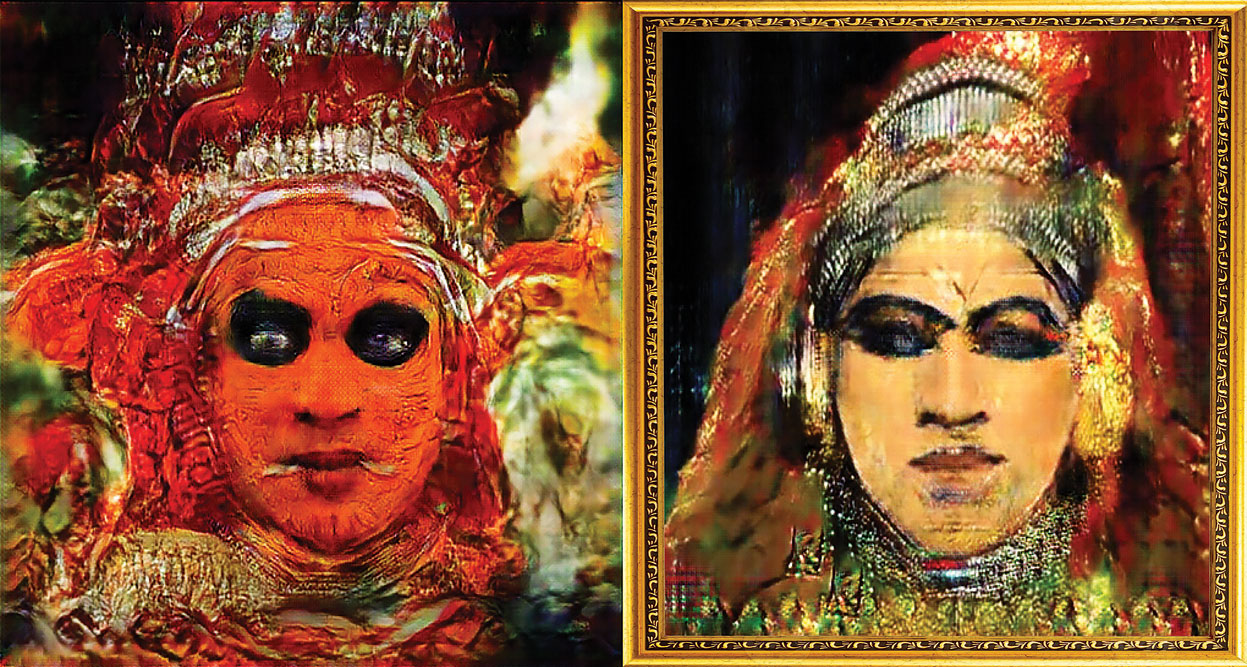 
ON AUGUST 28TH, Terrain.art hosted an Artists’ Roundtable conference over Zoom. Harshit Agrawal, the curator of their recent show Intertwined Intelligences: Imagining Digital Realities with AI, was joined by a group of global artists to discuss how artificial intelligence (AI) is pushing the boundaries of creativity and reshaping the world of art. For example, David Young, one of the participating artists, photographs flowers at the exact moment of blooming and distorts the results with AI. It can be interpreted as a metaphor for the fragility of life, especially so in Covid times. An AI artist himself, Agrawal tells Open, “I am excited about the scope of AI and the ways in which it can impact art for the better simply because of machine learning’s ability to amplify human creativity and create solutions that can be used to expand our own knowledge. You only need to look around. Technology and its interdisciplinary breakthroughs is the current reality of our times.”

Agrawal, who lives between Mumbai and Bengaluru, is not your typical artist. Instead of a paintbrush, easel and canvas, his tools are AI algorithms like generative adversarial networks (GANs) and convolutional neural networks (CNNs) along with sensors, animation tools, drones and augmented reality. One of the more popular AI applications, GAN is an algorithm that learns from data or a collection of images and generates fake samples from it. But it’s only as good as the instructions its creator feeds into it. “I thought of putting GANs before the other tools primarily because GANs is my main device for AI art. While GANs try to produce images that mimic the dataset I train them on, there are multiple parameters of the training process I can experiment with in order to get a variety of visual outputs. There is a certain level of estrangement of the training data when passed through the machine which fascinates me.”

Agrawal’s latest project is an ongoing solo show, billed as India’s first solo AI art exhibition. On view at the Emami Art gallery in Kolkata until September 30th, EXO-stential– AI Musings on the Posthuman is curated by Myna Mukherjee and features nine of the 29-year-old recent works, all whipped up using AI. For an artwork titled Strange Genders, he collected drawing samples from around 1,000 Bengaluru residents who were asked to draw a male and a female figure separately. These were then processed through a machine. Commissioned by Mukherjee’s cultural organisation EnGendered for the Italian art fair Artissima and made in collaboration with the arts collective 64/1 (founded by brothers Karthik Kalyanaraman and Raghava KK), Agrawal says the idea behind this piece was to compel people to rethink cultural representations of gender.


Masked Reality by Harshit Agrawal encourages viewers to stand in front of a TV screen. Soon, they discover their facial expressions transforming into those of a female Kathakali performer on the left side of the screen and a male Theyyam ritual performer on the right

Also on show is an interactive video, Masked Reality, which encourages viewers to stand in front of a TV screen. Soon, they discover their facial expressions transforming into those of a female Kathakali performer on the left side of the screen and a male Theyyam ritual performer on the right. Agrawal worked with two AI algorithms to create Masked Reality. Though playful in spirit, it has an underlying sociological undertone. “In Kerala, Theyyam is popularly performed by lower caste communities out in the open while Kathakali belongs to the Nambudiri Brahmins and is restricted to sacred temple-like settings. I wanted to engage with the cruelties of the caste system here and show how cultural prejudices are so deep rooted in Indian society even in the so-called internet age.”

This is where Agrawal’s conviction that AI art can have a positive influence on politics and society comes in. “Can AI art become a vehicle for getting people to think about the important social questions in a new way? That’s something I wanted to explore for a long time. What I want to capture with EXO-stential is that AI art is not simply about a novelty factor involving machines and cutting-edge technologies. It has the power for deeper engagement with issues of ethics, gender and caste. This truly has the potential to become a medium to challenge social realities,” he insists.

Agrawal is a Bachelor of Design from the Indian Institute of Technology, Guwahati and has a master’s in media, arts and sciences from the MIT Media Lab, Massachusetts. A digital evangelist, he didn’t exactly study computer science. But his bio takes the liberty to describe him as a “creative technologist”. Agrawal started experimenting with AI around 2015, when there was a buzz about this newfound aesthetic that lay at the intersection of creative expression and technology. Google had just launched DeepDream, a programme that tapped the neural network to dispense vividly psychedelic visuals. The invention of DeepDream gave birth to a global movement pivoting around AI. For Agrawal, an attraction about AI art was the element of surprise in its process. He adds, “The beauty for me is not necessarily to have a desire to tame this beast. It’s best to leave that room and be open for surprises. To sort of liberate him.”

ONE RECENT EVENING, I visit Sahej Rahal at his suburban Mumbai studio, intriguingly named Jaadu Ghar. Showing me a clip from his latest work finalforest.exe (2021) on his laptop, the 33-year-old says with childlike enthusiasm, “I love how this interactive game between a human and non-human can produce a third thing.” In this nine-and-a-half minute AI video, currently being shown at the Transmediale festival in Berlin, the artist has conjured up a bipedal creature pottering through a Hobbesian landscape which Rahal says could be a “lost past or something dystopian”. Mixing Sufi philosophy, theories of quantum mechanics and current Indian politics, the voiceover (by the artist himself and which he compares to David Attenborough’s in the latter’s nature documentaries) riffs on “citizens turning into ghosts”—a trenchant response to the wider debate around the Citizenship (Amendment) Act of 2019 that led to protests around the country. The film questions the relationship among caste, nationalism, disease, demons and state power while urging viewers to imagine a discrimination-free future. It was conceived using AI scripts attached to the animal’s body parts. The animations, on the other hand, were captured inside AI simulations that Rahal built on Unity3d, a video game engine. “The creature moves to my voice or any audio I play. Sometimes, I invite musician friends to sing to it,” smiles Rahal, who was a big fan of the cult 1982 hit Blade Runner growing up and was studying to become a computer engineer, “like every other kid in India”. He instead enrolled at the Rachana Sansad Academy of Fine Arts in Mumbai. While Rahal first made his name as a radical performance artist and sculptor, he continues to work with traditional methods including painting and sketching. As far as AI goes, he is entirely self-taught. “YouTube is the best art teacher,” he says, with a laugh.

Since the onset of the pandemic Rahal has pondered over an absurd thought—the virus as a form of non-human intelligence out to target humanity. Noting that the coronavirus has made us realise how dependent we are on the technologies at our disposal, he says, “I don’t see technology as something separate from the human touch.” Like Agrawal, Rahal views technology as “an extension of ourselves”. He explains, “Technology is capable of exerting a great control on our lives. Do you know the word ‘cybernetics’ comes from the Greek term ‘kybernetes’ which means to steer? The Sanskrit word for machine is ‘yantra’. Its root is ‘yum’ which means ‘to sustain’ or ‘to control’. The extent of the agency of the machine can be mind-boggling.” An avid classical music listener, Rahal has started incorporating symphonies as a “language code” into his AI process of late. “I often wonder what the future will be like. How will our species speak to it? When birds lose one of their own, they mourn the loss in song and this is the symphony that reverberates through the universe. The Sikh theologian Gurtaran Singh said that the prehistoric humans sang before speaking. That’s when it struck me,” he says, “We won’t talk to the future. We will sing to it.” 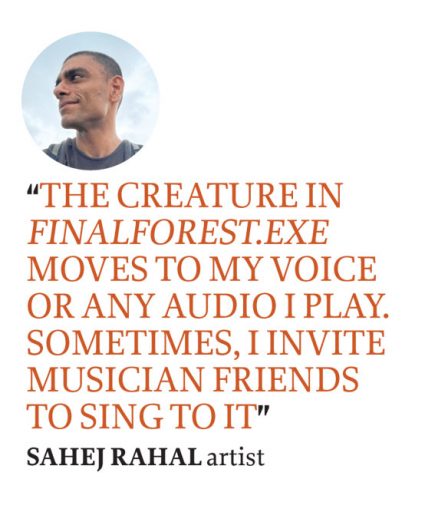 AI ART IS NOT new to India. In 2019, techies Fabin Rasheed and Sleeba Paul created Auria Kathi, dubbed India’s first artificially intelligent poet-artist bot. Starting January 1st, 2019, Auria uploaded an image and a poem on Instagram every day for a year. Her work was showcased at the Florence Biennale 2019 and NeurIPS 2019. Auria Kathi, whose name is an anagram for ‘AI Haiku Art’, was conceived using algorithms. The poems were generated from Language Model (fine-tuned GPT-2) and images from Microsoft’s AttnGAN while colour transfer was done using FastPhotoStyle by NVIDIA. Even her realistic human face gracing her Instagram profile was made with the help of AI. Looking back, Kochi-based Sleeba Paul says, “The technology has moved to another level in the span of just a few years. Auria can make much more interpretable images and poems today considering the algorithmic advances in language models and text-to-image networks like CLIP and GPT-3.”

Further back in 2018, the Nature Morte gallery had hosted an AI group show, Gradient Descent. Agrawal was a part of that one-of-a-kind exhibition. So was Aparajita Jain, who later branched out to found Terrain.art. “Gradient Descent was a huge moment not just for India, but the world. And here in two years, we have come a long way. Terrain.art is India’s first NFT [non-fungible token] art platform. Digital art has exploded exponentially,” says Jain.

In recent years, AI art has been enjoying its moment on the global stage. AI has piqued the art world, especially since the exploits of Ai-Da, the world’s first robot artist, or the Paris-based art collective Obvious’ Portrait of Edmond Belamy that became the first AI work to be auctioned off for $432,500 at Christie’s in 2018. Robotics has already gained huge popularity in other creative fields which depend on having a personal voice, such as music, theatre and even literature. But despite its success it carries plenty of perils, experts argue. One is AI’s regulatory concerns. Another challenge is to define the issue of authorship and autonomy. Whose creation is the artwork after all: AI’s or the human’s?

“When I am drawing or working with clay I have a sense of control over the objects and images I make but with AI programmes what happens is that even though I am the one writing the code and modelling the creatures once it’s set into action that sense of control evaporates and I get to surrender and play with the non-human minds,” argues Rahal. Most people also have misgivings about machines ultimately taking over and making the hand obsolete. Agrawal finds this narrative reductive. He assuages those fears by saying, “AI is assisting human creativity rather than replacing it. It’s my responsibility as an artist to ensure I use AI for greater human good and not for my own personal discoveries.”