WillKat and the Endearing Eleven of Kaziranga

The royal couple makes a difference in the animal kingdom too 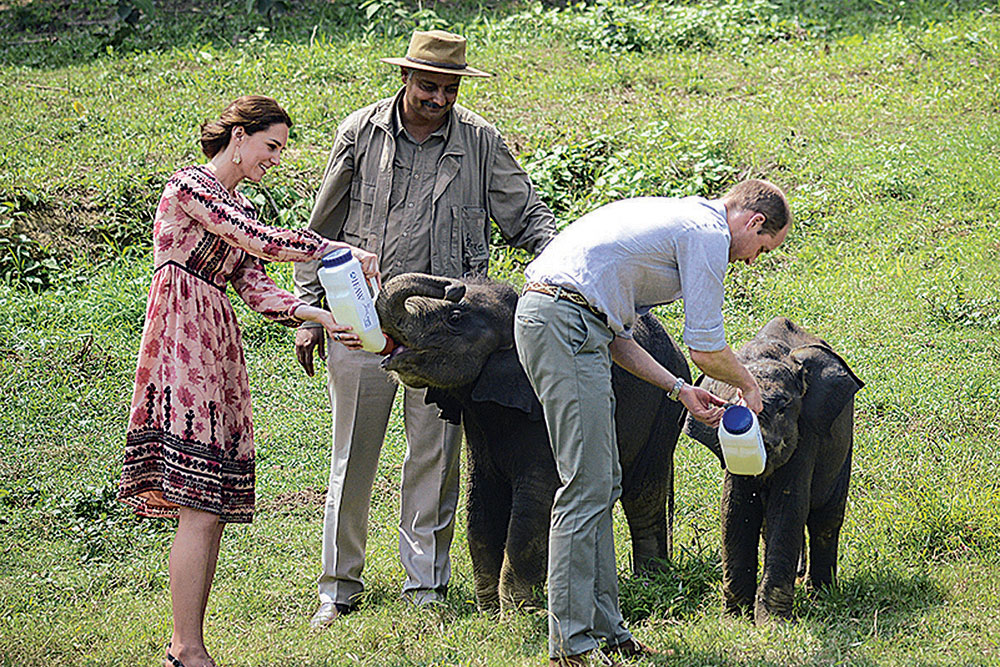 GHAJINI GULPED two-and-a-half litres of milk in three minutes flat. Ghajini, not Aamir Khan’s amnesiac character in the 2008 Bollywood hit, but a beautiful three-year-old jumbo with an elephantine memory. Her cleaved head, a machete mark that gave her the name, has almost healed. Unlike the man in the movie, she must remember the moment angry villagers set upon her as a two-month-old and rent her forehead asunder. She was the last to leave the fields that her family had ventured into and had seen the fury of man even before she learned to eat grain. But those macabre memories are in the past. Now, as she looks soulfully into my eyes, she is fully focused on milk. She has finished her second bottle of the day and lets out a shrill trumpet for more. Having squeezed the last droplet from the nipple of the gargantuan bottle I am holding aloft, she moves her trunk to my head, cradling it and letting little drools of saliva drip down my neck.

As I try to shift her, the largest of the eight elephant calves that are crowding me in, Prince William, Duke of Cambridge and second in line to the British throne, struggles to feed Dhemaji. He is holding the bottle a tad too low and the calf can’t get a proper grip on the nozzle. I help him lift his arm a little, so that the bottle tilts downwards into the cavernous mouth. Beside me, Kate, Duchess of Cambridge, effortlessly bottle-feeds the youngest orphan, Buree. She seems to have a knack for feeding the youngsters. The fact that she has been given the smallest of the calves is one reason. That she is a mother twice over must be the other. Meanwhile, two of our animal keepers tackle the incredibly mischievous Ripon and keep him away from the Royal bottle fest. The only sounds I can hear are the noisy suckling of the babies and the distant whir of dozens of zoomed in media cameras, which have been carefully placed outside the animal perimeters.

We are at the rescue centre in Kaziranga, run by the Wildlife Trust of India and the International Fund for Animal Welfare, with the Assam forest department. For nearly 15 years, the centre has saved the lives of thousands of wild animals and birds, rehabilitating survivors into the wild and in the process redefining wildlife rescue and veterinary science in India. Before the centre came up in 2002 (rescue work started through a mobile service in 2000), the concept of rescue was different in the country. If the forest department saved a life, the animal was sent, more often than not, to a zoo. Alive, but destined for a life behind bars. If an elephant calf was orphaned, it was taken into captivity, beaten and starved till its wild instincts were tamed. Rescue ended in a mangled life. I have always thought this to be strange, given India’s ethical and value-based wildlife conservation history. There are times when the life of the nation seems to be shaped by the twin master doctrines of dharma and ahimsa, and other times when the crushing realities of poverty and the aspiration for economic percentages prevail. Meanwhile, in the Western world and in Africa, conservation has been all about preventing species from becoming endangered or extinct. You can hunt an animal and still claim it to be part of conservation as long as the species flourishes. Individual lives do not matter.

It was left to this centre to demonstrate that for us, individual lives matter as much as species survival and habitat protection. While true to age-old principles of natural conservation, the rescue and rehabilitation centre is also the embodiment of a modern sensibility that has gradually overtaken conservation around the world. Leading animal welfare organisations such as IFAW, for instance, have moved left of the traditional wildlife conservation mores of organisations such as WWF and right of animal rights organisations such as PETA, to espouse a balanced centrist model. A landmark meeting in Limerick had underlined the need for a progressive wildlife movement.

THE CENTRE IN Kaziranga is in many ways a model of this progressive conservation model, one which integrates animal welfare and conservation. It has already put back more than 4,500 animals. It has a 60 per cent success rate, much higher than international standards of rescue and rehabilitation. It has pioneered putting back elephants and rhinos, bears and gibbons, and even the elusive clouded leopard. In doing so, it has nurtured dozens of young veterinarians, training them in the modern science of wildlife health and animal care. Skills honed in rehabilitation helped translocate the highly endangered Eastern Swamp Deer from Kaziranga to Manas without mortality during capture and movement. And the putting back of so many charismatic animals into Manas National Park so enthused the local Bodo leadership that they offered to triple the size of the World Heritage Park, which UNESCO had on its Red List of endangerment for 18 years. The orphans from the centre played a big part in capturing human hearts and a socio-political landscape.

It is to such a geography that their Royal Highnesses paid a visit. I would like to read this as a sign of their recognition that individual lives do matter. And that the Indian conservation model deserves as much attention as the African one. Waiting in line to be returned to the wild, the stories of these eight elephant calves and three rhino babies would now be known throughout the world. They were the Royal XI, the newest celebrity pachyderm team waiting to take guard at a championship game. The team credits would flash on the screen and across the globe.

The eight elephant calves, members of a faux herd, have Ghajini as one of their leaders. But the faux matriarch is possibly Usha, who was brought in at two months of age. Having lost her mother in a flood, the highly stressed Usha never accepted milk or feed. She went straight to adult food: grass. And that seemed to give her the status of mother. Today, she guides the other calves during their wild walks, which are part of the strict protocol of re-wilding. Then there is Dhemaji, also three, who was brought in at two months of age after being nearly swept away in a river. Dehydrated and ill, she recovered from two severe bouts of diarrhoea to become one of the most social of the calves at the centre. Dhemaji is the name of the place from where she was rescued— much like the etymology of many of the orphans.

Kumari was brought in at 14 months of age, rescued by the Forest Department from Kumarikata. Ultapani was found near the carcass of her mother in Ultapani Range in Manas National Park. She was transferred to the rescue transit home and then brought to CWRC. Murphuli was found as a month old in a tea garden trench in Karbi Anglong. She nearly went back to her wild herd as our vets tried to reunite her. An older female even came out of the herd, accepting the baby and raising hopes. Alas! The calf was found abandoned again the next morning. She was then brought to CWRC where she joined Buree, who was found only days apart. She was two months old when rescued by villagers from a rocky pit in Nagaon. She showed a swollen pelvis and aberrations but an X-ray ruled out a fracture, so she was given a splint to immobilise the joint and allow support while walking. Alongside the seven lasses, Ripon is the only boy and takes maximum advantage of that fact. These then, are the elephants.

The team is completed by the three rhinos. The youngest, Dunga, is only a month old and was found abandoned in Bagori. Was its mother poached? Did she die a natural death? We will never know, but Dunga, who, left to his own devices would have died in the park, was introduced to the two larger rhino calves. He follows them just as he does the two smaller elephant calves. The older rhinos head butt him once in a while and the elephants chase him around the paddock. “Isn’t he beautiful,” the Duchess whispers, tickling the pinkish skin behind his ear. Balidubi, the nine-month-old rhino calf, is the closest to him. Possibly because Balidubi himself had come in neonate, with his umbilical cord still intact. He had been abandoned during a flash flood, or perhaps his mother drowned. “They look so different to the African rhino,” says the Duke, “almost prehistoric.”

The final member of the eleven, Japori, is the biggest of the rhinos. Two and a half years old, he is the victim of a failed tiger attack. The tiger was driven away by its mother, but not before Japori was mauled and broke a leg. The mother seems to have abandoned him then and he was found limping on the outskirts of the park. Still in bamboo splints, Japori shows his agility by sprinting out of his favourite mud wallow as we approach. Kate has finished feeding three calves. Her unaccustomed hands must be aching, I think. Her Royal entourage is signalling rather dramatically to wind things up. “Is that all? Are you happy?” I ask her. “Just one more please,” she says, gesturing for another bottle to be given to her. It appears they would like to spend more than the scheduled twenty minutes with the calves. “I could spend the whole day here,” William says. The couple are clearly relishing the time they have taken out of their choreographed lives to visit Kaziranga and see some wildlife.

The visit of WillKat will no doubt do wonders for the popularity of this team of pachyderms. Their pitch will be just that bit flatter and the surrounding crowds just that bit more encouraging. Their chances of winning a life back in the wild may be just that bit easier. And their Royal Highnesses in turn may have absorbed an understanding of the importance of individual animal welfare amidst the hurly-burly of wildlife conservation, while having, as one of their minders put it, “the time of their lives.”