Why the BJP Loves Jinnah

What’s with the BJP’s obsession with Jinnah? First LK Advani and now Jaswant Singh have gone out on a limb to say something charitable about the man. 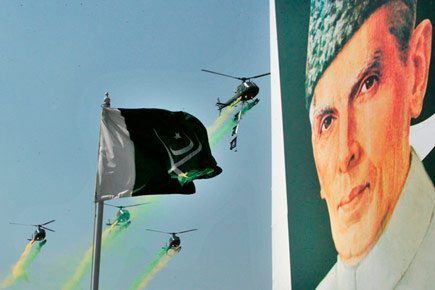 What’s with the BJP and its obsession with Jinnah? First LK Advani and now Jaswant Singh have gone out on a limb to say something charitable about the man.


What’s with the BJP and its obsession with Jinnah? First LK Advani and now Jaswant Singh have gone out on a limb to say something charitable about the man.

Apart from their senility, I can only think of one explanation; they envy him his achievement. He has created a nation in their image, a nation based on the faith of the majority with no room for diversity. In Pakistan, the BJP finds its ideal.

Four years ago, shortly after LK Advani had praised Muhammad Ali Jinnah, I interviewed Narendra Singh Sarila, ADC to Mountbatten, on his book The Untold Story of India’s Partition. Asked about Jinnah, he was caustic: “He suffered from megalomania, a sense of personal aggrandisement. He acquired two large houses—one in Malabar Hill (Mumbai), one in Delhi. He was already distanced from his daughter by the time, who was he going to bequeath these to? When Advani decided to call him secular, I wrote that we must consider the effect of his actions: they resulted in murder and mayhem. How can you call such a man secular? He may have had secular views, but his acts certainly were not.’’

Jaswant Singh seems to have gone the Advani way. In one of his interviews he claims: “In the 1946 elections, Jinnah’s Muslim League wins all the Muslim seats and yet they do not have sufficient number(s) to be in office because the Congress Party has, even without a single Muslim, enough to form a government and they are outside of the government. So it was realised that simply contesting election was not enough.’’ But this is a Jinnah of Jaswant Singh’s creation, not the Jinnah of history. I will restrict myself to what happened in Punjab because this is where Jaswant Singh’s claims ring the most hollow in the face of what really happened.

In the same 1946 elections in Punjab, in a state with an overwhelming Muslim majority the League did not get the numbers to form the government. It won 75 seats out of 175 and emerged as the single largest party but did not obtain a majority. An alliance of the Unionist Party, the Akali Dal and the Congress, which included Hindus and Sikhs and Muslims, cobbled together a coalition and came to power.

With the Indian experience in democracy it is possible to look back and say the government was not just the ragtag coalition it is often described as; it reflected in some measure the diversity of pre-Partition Punjab and included Muslims, Sikhs and Hindus. It was headed by one Khizr Hayat Khan, which itself was a body blow to Jinnah’s claim of representing all Muslims in India. But typical of autocrats anywhere, Jinnah’s belief in democracy did not extend beyond what it could do for his own ambitions.

The League defied the authority of the new government. With Partition approaching, the British administrators were loath to take sides, and the police response was less than effective. Throughout west Punjab, the Hindu and Sikh minorities were terrorised. Finally in March 1947, the Unionist Party chief minister handed in his resignation. In the aftermath of the fall of the government, Hindus and Sikhs were massacred across west Punjab. The violence spilled over to Amritsar in east Punjab; once again the victims were Hindus and Sikhs. At least 140 persons were killed in Amritsar alone. Presaging the events to come, a train arrived at Amritsar station with the bodies of Hindus and Sikhs who had been killed on board.

These events preceded the butchery of August 1947. It is possible to argue over what may have happened, but what did happen was that millions were butchered in the wake of violence deliberately instigated by Jinnah. This is not a matter of interpretation, facts are not infinitely malleable and what unfolded in Punjab in 1947 is not in doubt. Often enough historians believe in telling the story of the Partition dispassionately, citing the killing of millions on either side. But the killings of August 1947 in Punjab were preceded by months of communal violence organised and instigated by Muslim League leaders. The victims were in the main Hindus and Sikhs. The man who was complicit in these acts was Jinnah. This is the man Jaswant Singh claims has been “demonised” in India.

The truth contrary to what Jaswant Singh says is that Jinnah has not been demonised enough. There is a strange complicity between men such as Jaswant Singh and a certain stream of liberal Indian thought that continues to argue that Nehru should have accommodated Jinnah’s ambition and prevented the Partition. It is a strange and baffling argument given all we know about Jinnah. By the perverse logic of that argument, we should reach out to Narendra Modi and offer him the post of PM to end the divisiveness that plagues us today. The BJP’s real problem is that they cannot lay claim to the Freedom Movement, nor are Gandhi and Nehru figures they can come to terms with. Under the circumstances, the best they can do is to devalue them. And what better way to achieve this than to compare them unfavourably with Jinnah?