Why Ranbir Won’t Act with Farhan 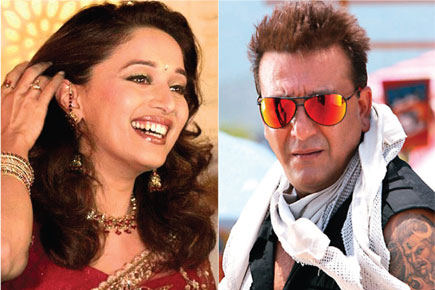 
Picture this: Ranbir Kapoor, Imran Khan and Abhay Deol starring in Zindagi Na Milegi Dobara. This was, in fact, director Zoya Akhtar’s original choice of cast for the film. And all three actors had reportedly committed to doing the film too. But, as it turns out, it just wasn’t meant to be.

The film, now complete and slated for release in July, stars Hrithik Roshan, Farhan Akhtar and Abhay Deol. Not a bad cast by any standards. But you just can’t help thinking how much younger the film might have looked had Zoya made it with her original choice of actors.

Word on the street is that the director decided to replace Abhay Deol with her brother Farhan, and that’s when the trouble started. Ranbir apparently decided he wasn’t comfortable starring in a buddy-buddy film alongside Farhan, who’s a good ten years older than Ranbir and Imran. He was concerned that playing a contemporary to Farhan would immediately put him in an older bracket. So when it became clear Farhan was definitely going to be a part of the movie, Ranbir allegedly bowed out. Satisfied with Ranbir’s logic, and concerned about who the makers might cast in the third role even if he did decide to stay on and do the film, Imran reportedly developed cold feet, and asked to be excused from the film too. That, of course, left only Farhan confirmed, and two major leads left to cast.

For one of the two remaining roles Zoya went back and cast Abhay Deol, who it is believed was more than eager to do a mainstream multi-starrer film. And for the third and presumably most prominent lead, she went back to Hrithik Roshan who’d bailed her out in Luck By Chance by taking a supporting role opposite her then rank-newcomer brother. Fortunately for her, Hrithik was happy to dive into her youthful, light-hearted entertaining film after a long schedule completing Sanjay Leela Bhansali’s physically and emotionally draining Guzaarish.

Look Who’s Getting Back Together

Madhuri Dixit, whose last comeback attempt Aaja Nachle tanked at the box-office, has now committed to star in the remake of Satte Pe Satta opposite her once ‘close friend’ Sanjay Dutt. The film will be made under Dutt’s production banner, and apparently it was the actor himself who convinced Madhuri to take the role.

After dating for a few years, Dutt was famously dumped by Dixit after he found himself embroiled in the 1992 Mumbai bomb blasts case, and has reportedly never forgiven her for ditching him during his most difficult period. In bitter response, the actor famously dished out intimate details of their relationship to all and sundry, and even took a dig at the actress on a recent episode of Koffee With Karan. When filmmaker-host Karan Johar asked Dutt what he’d say to Madhuri if they ran into each other today, the actor said he’d advise her to concentrate on her husband and kids instead of trying to land acting roles in Bollywood. Funny then that Dutt himself has approached Madhuri to work with him in the new movie. Expect his wife Manyata to be on the sets throughout!

As Unprofessional As Ever

Notorious for his unprofessional on-set behaviour, this A-list male star has been claiming that he’s turned over a new leaf. The unexpected runaway success of his pet project last year may have given him a confidence boost, but despite his claims insiders say he’s still very much the spoilt brat. The actor still doesn’t show up before 2 pm for a 9 am shift, and once on set, allegedly changes scenes and dialogues if he doesn’t think they  work. It isn’t unusual for him to literally ‘take over’ the action sequences from the director, and to plan them and execute them himself with some help from the action director.

The cameraman of his most recent film reveals that the star has very little patience when it comes to lighting up a shot. “When I asked for an hour in between shots to light up the next, he threw a fit and threatened to leave if I was going to waste his time,” the troubled technician reveals. The actor is believed to have added dismissively: “That’s what colour-correction is for. Fix the lighting in post-production.”

There are rumours that the actor is personally supervising the editing of the film, taking crucial decisions over the director. The film’s producer, an old friend of the star, has allegedly given him carte blanche on the project, thereby alienating other technicians, including the exasperated director who isn’t thrilled about being forced to take a backseat.