Why Raghuram Rajan Is Wrong

Rajan believes that it is too early to be complacent about inflation. For him, it is too risky to cut rates now. The reality is that Rajan isn’t likely to get a more benign scenario for a rate cut 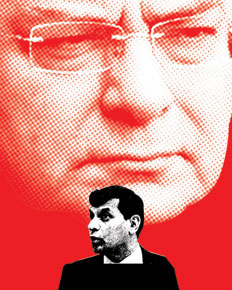 Rajan believes that it is too early to be complacent about inflation. For him, it is too risky to cut rates now. The reality is that Rajan isn’t likely to get a more benign scenario for a rate cut

Finance Minister Arun Jaitley does not usually lose an argument. Except, it would seem, to RBI Governor Raghuram Rajan, who not for the first time snubbed the Finance Minister by refusing to heed his call for a reduction of the central bank’s key interest rate in its latest Monetary Policy Review of 2 December. Of course, Rajan is acting within his rights: the RBI has the autonomy to set its policy rates. But is he acting on evidence? No. It must disappoint the lawyer in Mr Jaitley.

Jaitley has all the evidence he needs to ask for a rate cut. Inflation has fallen to its lowest in several years—for the month of October, it was just over 5.5 per cent, which happens to be lower than RBI’s target of 8 per cent for January 2015, lower even that its 6 per cent target for January 2016. At the same time, India’s economic growth has clearly not picked up. The latest GDP figures for the July-September quarter of 2014 show a growth rate of 5.3 per cent, a fall from the 5.7 per cent recorded in the April-June period. The statistics for industrial production are similarly stagnant. The positive sentiment that accompanied the arrival of the Narendra Modi Government has prevented any further slide in India’s economic fortunes, but the growth engine needs the stimulus of lower interest rates to start revving again.

Rajan believes that it is too early to be complacent about inflation. For him, it is too risky to cut rates now. The reality is that Rajan isn’t likely to get a more benign scenario for a rate cut. One of the crucial determinants of inflation in India, global oil prices, has come crashing down. Since OPEC, the group of major oil producing countries, has decided not to cut output in the near future, there is little risk of global oil prices shooting up. Now, there is always a theoretical risk that something may change this reality—say, ISIS invades Saudi Arabia— but the RBI Governor must be realistic in his assessment. He cannot let paranoia become the basis of policymaking.

The other positive fallout of lower oil prices is that the Government’s subsidy bill will fall dramatically. This will help rein in its fiscal deficit, another reason inflation should continue to fall. In any case, the incumbent NDA Government seems far more committed to fiscal consolidation (and less populism, especially) than its UPA predecessor. Rajan doesn’t seem to have recognised this either. The best central bankers in the world are those who are ‘ahead of the curve’. A good governor doesn’t wait for inflation to hit rock bottom before he starts to cut rates, just as he doesn’t wait for inflation to hit the roof before he starts raising rates. On present evidence, Rajan is being too hawkish and overcautious. It will cost India economic growth.

The stand-off over interest rates between Jaitley and Rajan— as has happened before between other governors and finance ministers as well—raises a troubling question. Should an unelected technocrat, no matter how stellar a reputation he has, have the authority to overrule an elected government? Who decides how much inflation is acceptable and at what level growth is too slow? The answer is simple. The elected Government must decide what an acceptable level of inflation is. That said, the Government cannot continually change the goalposts depending on interest group pressures or political convenience. It is therefore equally important that once the Government has set goals for the RBI, it be allowed to pursue those goals in a completely autonomous fashion.

That is the monetary policy framework which the Government and RBI must strive towards. Right now, the RBI sets the targets and then pursues them as it sees fit, while the Government watches from the sidelines. That must change. An argument between the Finance Minister and RBI Governor cannot solve the problem. It requires institutional and legislative change. Jaitley has promised a new monetary policy framework in his next Budget speech. It is the perfect opportunity to enshrine by way of law a new working relationship between the RBI and the elected Government. It will bring much-needed transparency to setting monetary policy. All stakeholders will clearly know what the targets are and it will force the RBI to explain its own policy decisions to the public. It would be a good idea for the new framework to divest the RBI Governor of the power to determine interest rates. That job must be handed over to a monetary policy committee of which the Governor can be a member. That will bring some checks and balances into decision-making. The Governor should also be asked to testify regularly in Parliament on how the targets on inflation and growth are being met. The Finance Ministry will also have to learn to deal with this new reality. Once it has set the target rate of inflation (with Parliamentary approval), it will have limited space to crib as long as the targets are being met.

Both the Finance Ministry and RBI will lose some of their untrammelled powers in a new monetary policy framework. At least the economy will be spared futile shadow boxing which only adds to uncertainty and does little to either control inflation or promote growth.