What I Learnt from My Internet Holiday

Do we become digital hermits just to bypass the clamour and save our skins? Unfortunately, that doesn’t work. Because identity on the internet is something akin to a ‘blank vote’. You can be sure someone else will appropriate it if you don’t 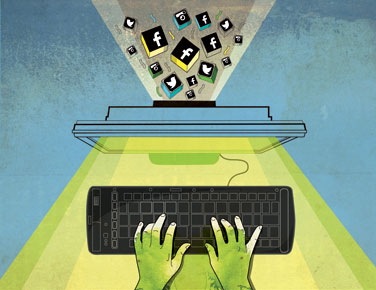 You know that famous koan: If a tree falls in a forest and there’s no one there to hear it, does it make a sound? I’ve never fully grasped the intricacies of that particular philosophical conundrum: is it about the nature of reality, human existence, ecology, illusion—who’s to say? But I know I’ve often felt like that tree.

Let me explain. Three years ago I went off the grid. My Facebook account got hacked, and shortly thereafter I moved to a coastal village where I had to stand on a bathroom ledge to catch 3G on my phone. The two events were unrelated, but the motivation to make myself something of a recluse was strong. Prior events had indicated that noise was beginning to agitate me. I once smacked a man on the knee in a movie theatre because he refused to put his mobile phone on silent (I asked nicely five times). I almost attacked one of the neighbours in the apartment building next to my parent’s house because her car had one of those annoying reverse gear signals that went bibibibeep bibibibeep when she backed up, and she took a minimum of three minutes to get the bloody vehicle parked. Rather than succumb to this newfound violent streak, I decided it would be better to remove myself from the city’s rambunctious milieu.

According to Statista, an estimated 150 million people in India are currently using some kind of social networking media. If you think of the virtual world of social media as a forest, and imagine each of us in it as a tree with creatures in our branches that continually emit a series of beeps, rings and tweets, then you’ll admit that this is a pretty noisy place to live.

Say you live at the edge of this forest, and you suffer from an indecisive Libra-rising personality, which makes it impossible for you to decide whether or not you can handle the cacophony. Say you meditate daily on quelling FOMO issues, but the childhood fear of being left out continues to haunt you. The dilemma you are faced with is: Are you going to be a tree that leaves behind a digital footprint—number of Twitter followers be damned? Or, are you going to be a dignified tree that chooses to quote Franz Kafka before falling silently into oblivion? ‘Have you ever observed people from the city?’ Kafka wrote in The Village Schoolmaster. ‘They twitter unceasingly. When there’s a whole row of them together the twittering goes from right to left and then back again, to and fro.’

I went with the Kafka option, renouncing any kind of internet presence except for a website, which is purposely and rigidly non-interactive. But I’m always on the verge of changing my mind. Particularly when I hear about friends who other people (sometimes random strangers) seem to have more information about. “I really like your friend Lulu’s Facebook vibe,” my pal Myra tells me. Myra has never had a single tête-à-tête with Lulu beyond some basic air-kissing at a party, but never mind, she proceeds to scroll down Lulu’s page on her phone—through lovely, mottled photographs of cockatoos and Goa monsoons and quotes of Marguerite Duras, making me miss my friend Lulu and wonder why I’m denying myself such basic human interaction. Then of course, there are the ranters, oversharers, stalkers and relentless updaters, which can lead to Facebook fatigue.

Like many writers, I am a shy exhibitionist. This lies at the root of my social media phobias. I don’t want to be one of those self-promoting jerks banging on about how great they are. I want someone else to do it for me, while I bask coyly in the glory. Also, I don’t want to have to communicate with strangers. The problem is that if you’re a privacy-loving writer without the status of, say, Zadie Smith or Jonathan Franzen (who have no need to sully their inboxes), you’re generally left to your own tom-tomery. And if you choose not to play the tom-tom, chances are high that your darling creations will sink without so much as a thud.

If you believe that what you have to say deserves to be printed, bound and sold, or at least merits an e-book, it means you believe you have a voice worth listening to. So don’t believe any writer who says there’s no ego involved in the trade. Writing is plenty ego. It’s plenty scrounging about too. Little surprise then that writers have taken to social media like locusts to a rice field. What better way to spread awareness about your talent, to pick and glean with aplomb. Never has black book plundering been so easy—contacts, festivals, publishers, potential blurbers—all lie waiting to be friended, poked, followed. For an industry where words like self-promoting and networking used to be uttered with a constipated air of disgust, now it’s all par for the course, in fact, some would even say, necessary.

Let’s not deny that the internet is an egalitarian platform. It offers liberty, fraternity and equality in a way that the French Revolution never quite managed to pull off. The beauty of this parallel URL universe is that if only three people showed up to your actual live event, you can still take a flattering back- to-front room shot and share it with the entire world. And it isn’t just writers who’ve become empowered with social media. Turns out almost everyone has an opinion about almost everything, and almost everyone believes their life is interesting enough to be narrativised.

As humans we thrive on storytelling. Storytelling is a feature of every known culture, so perhaps it’s not so bizarre that what previously took the shape of idle chit-chat at the local kabaddi pit, now manifests in several forms across several cyber mediums. Sure, there’s an element of narcissism built into the belief that curating your selfhood and identity for the consumption of others is a perfectly acceptable pastime. But some people would say (and they’d be right) that humans have always been projecting versions of themselves to society. We’ve always been self-obsessed fraudsters, so what’s the big deal?

Two things. First: it appears that social media is making us more antisocial. This is obviously debatable, although a quick sweep of any gathering of humans where people previously enjoyed conversation minus the barrier of a screen, will now reveal several wandering eyes gawping at their smartphones, because the virtual world always promises to be more alluring than the living, breathing one. Some psychologists maintain that social media is making us lonelier and more depressed, others say it’s making us happier. What’s less debatable though, is that the incessant stimulus of social media is lowering our threshold for boredom—a crucial key to unlocking human creativity. Now, whenever our brains start to cramp, instead of doodling with the idea of whether or not we have free will, we log in.

Second: In earlier times, when we were just shooting the breeze, our reach extended only to friends (real ones, not fako Facebook ones) and family. Now, the Twitterverse is really our oyster, which means that the scope for a cock-up is colossal. And it’s not just politicians, celebrities and corporations who screw up for offences ranging from stupid to indecent, but regular people too. Remember Justine Sacco? The PR executive who before boarding a flight to Cape Town broadcast to her 170 Twitter followers: ‘Going to Africa. Hope I don’t get AIDS. Just kidding. I’m White!’ Or Lindsey Stone, who thought it would be a fun thing to post a photograph of her giving the one-fingered salute by a ‘Silence and Respect’ sign at the Arlington Cemetery. Both women trended worldwide on Twitter for what was essentially a dodgy sense of humour, received rape and death threats, were fired from their jobs, and didn’t leave home for months.

Journalist and screenplay writer Jon Ronson explores their cases and others along with this phenomenon of ‘virtual lynching’ in his timely book, So You’ve Been Publicly Shamed. He believes we’re at the start ‘of a great renaissance of public shaming,’ where a collective fury against the ‘terribleness of other people’ fills us with a disproportionate amount of rage. Most people who use social media to protest are motivated by the desire to do good, but there’s a fair amount of schadenfreude involved in having the power to tear someone’s life apart. And women seem to be on the short end of the stick on this deal, yet again.

As with anything, it depends on whether you believe people are inherently nice or whether they’re nasty pieces of work. Lots of people use social media in a perfectly healthy way—to stay in touch with friends, post pictures of their babies and cars, upload protest rap songs, or start online petitions to prevent the culling of stray dogs or heritage buildings. Then there are those who think it’s a fine thing to tie up a 13-year-old boy and beat him to death with a metal bar, laughing while he pleads for his life, and posting a video of this murder online. The nature of internet egalitarianism is such that if you’re going to allow social clicktivism and selfies, you must also allow revenge porn, cyberbullying, and hate speech. The floodgates are open, and with it comes a whole lot of noise.

So what are our options? Do we become digital hermits just to bypass the clamour and save our skins? Unfortunately, that doesn’t work either. Because identity on the internet is something akin to a ‘blank vote’. You can be sure someone else will appropriate it if you don’t. In fact, the reason Jon Ronson had the idea to write his book was that his identity was hacked by a spambot.

Take the protagonist of the latest shame brigade—Walter Palmer. In the fictional version of Walter Palmer’s life, we would learn about the summer Walter first kissed a girl, about his worst nightmare—a recurring dream of all his teeth falling out. We’d know he hates wearing glasses but can’t suffer contacts, that the birth of his two children filled him with fear and wonder. In the first act, there would be some foreshadowing about his love for Africa. It would be a life rich with nuance and flaws, but most importantly, with the possibility of redemption. In the internet version, a dentist from Minnesota called Walter Palmer goes to Zimbabwe and kills a lion called Cecil. He does this and does this in 140 characters with a cross bow and no remorse, and he rots in hell… forever.