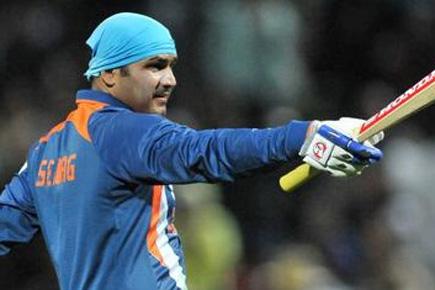 How will Virender Sehwag be remembered? It is not a coincidence that his peak was also when Indian cricket first lost its fear of winning abroad. Psychology had a part in it. After Sehwag’s initial blistering pile of runs, the middle order, never the most mentally strong lot, could bat with less stress. Whenever Sehwag fired, the probability inevitably swung in India’s favour. Or perhaps Indian cricket will remember Sehwag for his abandon and absence of fear. It resulted in double and triple hundreds that even Sachin Tendulkar couldn’t emulate. But then why is Tendulkar great and Sehwag not? How is it that, unlike a Tendulkar or Rahul Dravid, Sehwag is retiring when he is not even a member of the team?

There is also an important lesson to be learned from Sehwag’s career; he is an example of why the hackneyed advice—‘just be yourself’—is wrong. It can work for a while but sooner or later your innate self is always going to fall short of the demands placed on you by the environment. Entropy works its law in humans too and a particular way of being which reaps great dividends will run itself out.

Contrast the batting styles of Tendulkar and Sehwag through their careers. In the beginning Tendulkar was aggressive but as the years progressed so did his caution. The body that wields the bat at 22 is not the one that does so at 30. Tendulkar changed tracks and put a premium on protecting his wicket. Sehwag ended exactly as he began. The same bullheaded approach that made such a potent cricketing force was responsible for a more or less permanent underperformance. Sure, the big scores would come but they were flash in the pans.

There was something heroic or foolish about the way he played but that is the kind of character on whom myths get built. For example, writing in The Times of India soon after Sehwag announced his retirement, Sourav Ganguly reminisced, ‘His confidence stemmed from a deep- rooted belief in his own ability. I will never forget the NatWest Trophy final. When the two of us were walking out to chase England’s 325, Sehwag was whistling. I was tense and told him to focus on the task. He told me, ‘Captain, we will win this game’!’ It is a great anecdote but then you have ask what about all the times that Sehwag walked out whistling and didn’t win the game. India has rarely ever had a better than 50-50 record of victories. Such an attitude seems somewhat self-delusional.

But it is not, so long as you are clicking. Great performances obscure everything else but it is when the form falls—and to whom has it not happened—that what was once thought to be a gift becomes an exasperating attitude. Malleability itself is a form of talent and that Sehwag couldn’t be shows why he finds it difficult to join the ranks of the greats.

He is a man who scratched the surface of cricketing immortality and then was found wanting. Maybe he should have retired half a decade ago and then there would still be stories of Sehwag being told.