Unity of the Excess and the Exquisite

There is a special pleasure in viewing the dissonant sensibilities of Rakhi Peswani and Zakkir Hussain, making statements in individual voices but ultimately connecting dots across artistic styles, historical eras and geographical regions near and far 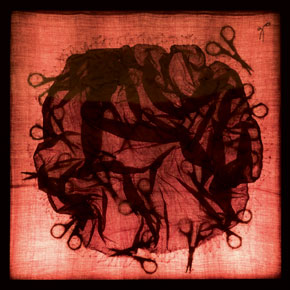 After the drought of the summer months, the art season is back in the Capital with the promise of freshness and variety. Perhaps the most coveted draw of September is the retrospective of the late photographer Prabuddha Dasgupta’s work, on at the National Gallery of Modern Art in New Delhi, which deserves an independent survey (See ‘The Naked Truth’, page 49). In the mean time, several spectacular group shows around the city must also be noted, and duly applauded, for the imaginative curating and display that have gone into them.

‘The Lay of the Land’ at Latitude 28 and ‘Phenomenology of Perception’ at Exhibit 320, both located in Lado Sarai, brought together a range of work by artists from across the Subcontinent. The former has particularly exquisite watercolours by Sujith SN and Sarika Mehta—simple, elegant but alive with heartfelt emotions. Artists from Sri Lanka, a nation that is less often represented on the map of South Asian art, find place in this show as well, though most of their works do not seem to have the currency and edginess of some of their counterparts from the other countries. Bangladeshi artist Yasmin Jahan Nupur, with her sensual colours and boldly abstract imagery, was my discovery at the other venue. If her installation of velvet roses covering an entire wall of Exhibit 320 was intended as pure visual delight, it was also unabashedly camp and deliciously crazy.

At Nature Morte in Niti Bagh, ‘Double Take’, put together by the American curator Diana Campbell Betancourt, transforms the austere white cube of the gallery into a bizarre ‘fun house’, an artful la-la land of sorts. Ostensibly comic in intent, the work you see in there can have a range of reactions on you: it can set your teeth on edge, leave you bemused, or bring a sardonic smile to your lips.

From the giant wide-eyed bunny on the sofa by Korean artist Gimhongsok to the ironic drawings by Sarnath Banerjee to gold mylar balloons suspended from the ceiling by Philippe Parreno, there is a good deal in this show to engage the eye as also hark back to the masters of kitsch and kink: Bruce Nauman, Andy Warhol or Jeff Koons. There is much in here that will keep you amused and interested on a lazy afternoon, but probably not anything that will float into your consciousness long after, all of a sudden. For that elusive, maybe enduring, appeal, you will have to make your way further up south Delhi, to Defence Colony.

Among these richly diverse group shows, the one that has stood out for me so far is at Vadehra Art Gallery (VAG) at D53 Defence Colony.

Two artists, Rakhi Peswani and Zakkir Hussain, are presenting visually distinct bodies of work there, so it may be fairer perhaps to call this presentation a solo double bill. Thematically, though, their paths cross softly, if unexpectedly. What one sees here may not necessarily be strikingly original or even superior from the rest of the pack, but there certainly is a special pleasure in viewing the dissonant sensibilities, making statements in individual voices, but ultimately connecting dots across artistic styles, historical eras and geographical regions, near and far.

Hussain, who lives and works in Kochi, has chosen a gently ironic title for his set of paintings, ‘Translating the Silence’. For a medium of expression that avoids any obvious form of noise, these paintings are indeed curiously redolent of sound, especially of the chatter of human voices. Figures, standing erect and statuesque or hacked into pieces and scattered over the canvas, recur in these compositions. Graced by the colour of fresh blood or the tender pink of the viscera, Hussain’s imagery is macabre. His humanoid forms are emptied of emotions. They could have belonged to the full-bodied figurative world of Bhupen Khakhar or Sudhir Patwardhan, but are instead reduced to wretched pieces. Optically, one cannot help enjoying the deft interplay between colours and textures, even as the senses register the shocking violence at the core of his work.

Intellectually, the framing narrative of Hussain’s paintings is derived from press photographs, from the daily profusion of images of human bodies in pain we see in newspapers and magazines. Suffering humanity explodes not with noise but into deafening hues on his canvases. And thus, in a sense, silence breaks open the inner mysteries of colour and communicates a truth more eloquently perhaps than words.

One reckons with fragmentation in Hussain’s work on at least two levels: within a single canvas and as clusters of different canvases come together to form giant installations. The eye is teased relentlessly, as body parts and colour parts come to cohere suddenly into wholes, only to disperse and dissociate themselves again from the grip of an illusive unity. The intricate marriage of the figurative with the abstract lends a kaleidoscopic aspect to his art, pulsing with a giddy rhythm as you walk among the paintings.

The counterpoint to this melodrama and excess is Peswani’s minimalist work, displayed on the first floor of the gallery. As the title suggests, ‘In Continuum’ carries forward the artist’s earlier experiments with thread and needle. This medium is juxtaposed with small mirrors, like the ones used in traditional forms of embroidery in certain folk cultures. Such a device is effective, not just aesthetically but also for its power of invoking visceral suggestions.

Needles are deliberately embedded in the textiles. Sutured lines crawl up the surfaces, conjuring surgical activities of stitching up wounds and gashes. The effect, overall, is piercing, quite literally so, as one takes in the line of stitches nimbly sewing into existence eyes and lips and noses.

The use of this medium, though by no means novel, is not too common in the fine arts. The French-born American artist, Louise Bourgeois, for instance, was one of the pre- eminent users of needle and thread on textiles. Blessed with the legacy of her training as a young girl in repairing tapestries, which was the business her family ran in France, she sewed stunning words and phrases into the tender surface of quilts (“I have been to hell and back. And let me tell you it was wonderful,” goes one of her famous sayings in this series). Put to the service of expressing Bourgeois’ ironic rage and despair, the quilts became a perverse inversion of the symbol of domesticity and femininity.

The dominant motif in Peswani’s series is of the eye—ever watchful of pain and sorrow, pierced by too much reality, yet daring to keep a steady gaze. The eye in her compositions stares unblinkingly, looking as much within as outwards. It is the recipient of suffering and sadness, of longing and loss—emotions that inform her drawings and mixed media work as well. In the oversize sketches of female nudes displayed on the floor, with the word ‘trying’ imprinted next to the supine figures, one detects the echo of another artist, the British-born Tracey Emin.

Not only did Emin herself draw a series of haunting and candid nudes, mostly self-portraits, reminiscent of Peswani’s style, but she also collaborated with none other than Bourgeois, between 2008 and 2010, to create a body of work called Do Not Abandon Me, which was shown at Hauser & Wirth in London in 2011. These twin influences are brought together in the sensual and lyrical language of Peswani’s art to create a rich tapestry of remembering, recreating and ritualising several histories—of art, artistry and personal ardour.