To An Anonymous German Critic

It isn’t necessary for a critic to watch something with an entire Indian glossary in her head. Sringara, who? And what is the use of speaking of context? Why should you know anything about the history of Dasiattam and devadasis in South India? 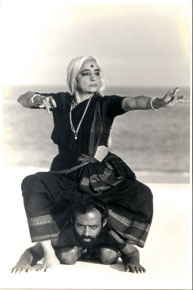 I wanted to write and thank you because it’s not everyday that I’m thought of in the same naughty, spicy breath as Sunny Leone. I can’t speak for all small-built ladies, but for myself, the prospect of occupying the same troposphere as Sunny is thrilling. I’m the lesser star, of course, but I’ve since learned that Sunny has aspirations to write. She advocates for PETA. We’re basically soul sisters. She just doesn’t know it yet.

I mention Sunny because she’s the only porn star worth talking about in India. My entry into the industry was quite different. Subversive, I’d like to think. I know everyone bandies about how they ‘just fell into’ their careers, but it’s really how it was with me. When I began dancing, all I was asked to do were your basic Yoga pretzel contortions— headstands and backbends, which I could pull off with more than a zesty sense of élan. Our director, Chandralekha, was dictatorial, as most kingpins in the industry were those days. She instructed. My dance partner and I followed like lambs. We had no contract. We worked long hours. On the surface of things it was all very innocent. It was only a few years into our routine when I saw the first video recording of our work. I was flabbergasted. I saw that with the crafty use of lights, with the movement of arms and legs in certain ways, our bodies were creating so many unexpected geometric shapes. This woman was making all kinds of tantalising things happen.

Over the thirteen years we’ve been performing this work we’ve had so many reactions. Some people have wept. Others have slept (it is an admittedly slow piece). Some say it’s like falling in love in a petite mort kind of way. Others complain that it’s most uncomfortable on their perineums. The most affected liken it to a spiritual experience. But as with all artistic endeavours there are bound to be people who raise an eyebrow, make sly comments, who frankly want to spit in disgust.

As a critic you’ll know that most folks tend to get upset when they’re criticised. But I believe if you’re putting work out there, you must expect it to be judged. We all have our moral codes. Once, while listening to a group of American poets reading in Paris, I got hung up on one of the poets who used the word ‘cunt’ repeatedly. When it comes to describing female genitalia, ‘cunt’ is probably my least favourite word. There must have been fourteen of its usages in a single poem. It reminded me of the time I took my mother to see Pulp Fiction without knowing anything about the film. Every time Samuel L Jackson or John Travolta opened their mouths and let fly the F word, my mother flinched, and I would mirror in sympathy. It was like a slow and unsuccessful electrocution.

‘Cunt’, ‘vagina’, ‘snatch’, ‘pussy’, ‘yoni’. Say a word long enough and it becomes meaningless.Yoniyoniyoniyoniyoni. That could be Eeyore braying in the corner.

Still, in your line of work, I expect naming is important. According to Eve Ensler, author of The Vagina Monologues, there is a power and mystery in naming things. “I believe that by saying it (vagina) 128 times each show, night after night, naming my shame, exorcising my secrets, revealing my longing, was how I came back to myself, into my body…The public utterance of a banished word, which represented a buried, neglected, dishonoured part of the body, was a door opening, an energy exploding, a story unravelling.”

Liebe Frau, this is why I should tell you that a few people were upset when you used the word pornographic to describe some of the positions in our dance work. While it’s true that our work has no discernible story line, it’s meant to evoke more complex emotions than ‘Here comes the plumber!’ Some people were also alarmed that you saw female subjugation, when, in fact, the entire piece was about shakti ascending. I believe work should speak for itself. It isn’t necessary for a critic to watch something with an entire Indian glossary in her head. Sringara, who? And what is the use of speaking of context? Why should you know anything about the history of Dasiattam and devadasis in South India, the Brahaminical appropriation of Bharatanatyam, and subsequently the big fat finger that Chandralekha was giving to patriarchy in each and every one of her choreographies? Frankly, if all that doesn’t jump out and slap you in the head, then the work must be lacking.

Before writing to you, I did some research about the history of Western dance so as to understand where you might be coming from. I read about the great Russian dancer and choreographer Michel Fokine who said, “Ballet is pornography— plain and simple.” I read about the genius of fleet-footed Nijinsky and his masturbatory moves in Afternoon of a Faun. I discovered the precursor to Eve Ensler, an artist called Carolee Schneemann, who in 1975, stood up on a table with a sheet and a bucket of mud, disrobed, and proceeded to extract from her vagina a scroll of text, which she read in entirety (a response to a male artist who criticised her for making ‘messy, female work’). I spent many hours on YouTube watching clips of Pina Bausch productions—Nelken and Rite of Spring—her dancers in gossamer sheaths and wild hair, the cross-dressing, the breasts, the chests, the loneliness, the togetherness. It was dizzying. I couldn’t sleep for days. My dreams were filled with cancan girls, pole-dancers, Mughal courtesans, ballet dancers with perfectly peachy butts. I’d wake in a puddle of purusha-prakriti sweat. It was so profound. Because I realised that there was a zigzag line that connected all of them to the body, and therefore, to me. So once, again, I must thank you.

When I was growing up in Madras, there was a magician by the name of P James, who was a hit at certain kinds of birthday parties. He was a small man in a shabby magician’s suit with a limited repertoire of tricks. His masterpiece involved luring a young boy on to the stage to be his volunteer. P James would then proceed to yank the kid’s arm up and down like a manual water pump, saying, “Now see the waters of Ganga flow. Gilly gilly gilly! (His version of abracadabra).” And to the horror of the kid, water would trickle forth from an invisible spout situated just under his willy.

Sometimes when I perform I think of myself as an idol taken from the dark recesses of a temple into the light. Sometimes a bird or a creature of the sea. In the future, maybe I’ll even imagine I’m Sunny. When I’m moving out there in the timeless spaceless black box of the stage, I try to burrow microscopic drishti holes into the distance. I don’t think about whether people are flinching or sleeping. People will say what they will. To those eyebrow-raisers I can only offer what our director Chandralekha used to say to her naysayers. She’d accept criticism like a present—eyes agleam, corners of mouth twitching. She understood it all when she uttered just one word in reply to all wayward comments. A German word, in fact: ‘Rorschach’.

We see reflected in the work whatever’s in our mind’s eye, don’t we Liebe Frau? It’s a kind of magic. Gilly gilly gilly.