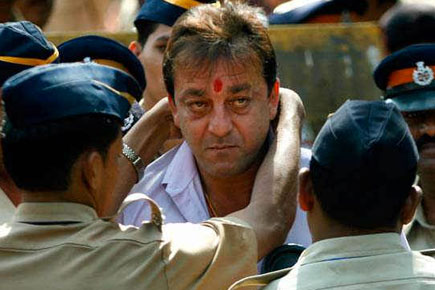 Since the beginning of Sanjay Dutt’s sentence last year, for every two days he has spent inside jail, he has spent one at home. There was puzzlement when he got out in October citing a hand injury, barely four months after his incarceration. There was mild annoyance when he immediately got an extension. There was astonishment when he got parole for a month in December. This time, the stated reason was his wife Manyata’s illness. There was real anger when the parole was extended by a month. And now that he has got permission to remain home for one more month, there is outrage. On 25 February, the High Court asked the state government to explain all this. Earlier the Centre had demanded a report on Dutt getting repeated extensions.

If this alleged manipulation of the system makes one seethe with anger, then there are two ways to deal with it. One is fatalism, because after all what is new in it? In 2001, a Kerala politician, R Balakrishna Pillai, got four paroles in the first five months of his one-year sentence for a corruption case. He was finally released having been only 69 days inside jail. Pillai’s party is a key constituent of the ruling alliance in the state. In Maharashtra, a former minister named Suresh Jain, who was denied bail by the court two years ago in a housing scam, has been shuttling between hospitals, though a television sting showed him to be quite hale and hearty. Anna Hazare, who has had a running battle with Jain for many years now, said the politician was getting five-star treatment.

It comes as no surprise to anyone that this is how the system is in this country and if you get upset about it, all it does is get your blood pressure up. But when it comes to Dutt following in such yeomen footsteps, there is a silver lining. Politicians are expected to be devious and manipulative; film actors are thought to be noble souls. The country considers politicians an evil one must live with; superstars are loved and respected. When someone like Dutt abuses the system, it jolts people into recognising how completely flexible ideas like justice and equality have become.

It is not a happy coincidence that Zaibunnisa Kazi, a septuagenarian widow who was sentenced in the same case as Dutt, should have her parole denied at first, then have it approved soon after the uproar over Dutt. They used her parole to show that there was no special treatment for Dutt, but it was a tactic so clumsy in execution that it only highlighted Dutt’s treatment. The High Court is now questioning the discretionary powers the state has in giving one person parole and denying it to others. In abusing the system, Dutt might just have come to the aid of many prisoners who are denied parole because they don’t have the resources to push their case.

In a country where few good changes happen unless forced, reform is often the result of system abuse becoming so shameless that it is impossible to ignore. Case in point: the 2G Scam, where even the pretence of a due process was thrown to the winds. It fuelled the Anna Hazare movement and now we have a Lokpal Bill, for whatever it is worth. The Dutt case might not have such a seminal outcome, but in the long term, it might still do some good.