The Right to Happiness

It took just one visit to Kabul to appreciate what we take so much for granted. 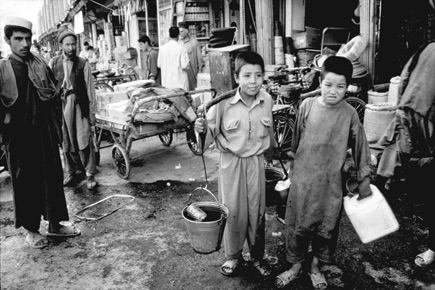 It took just one visit to Kabul to appreciate what we take so much for granted.


I went to Kabul eight years ago. That’s a long time ago, but perhaps not long enough. Has anything changed there? One doesn’t know. Kabul is situated at the bottom of a tea cup, with the sides of the cup rising in hilly mystery. The roads are wide and flat; the Russians, wherever they went, made sure that transportation was efficient and modern and fully functional. No one knew any traffic rules, and it was only through trial and error, and extreme bodily danger, that you learnt whether it was left hand drive or right hand. Traffic policemen carried light machine guns, and that was the only way that cars—all Toyota taxis—would maintain some semblance of decorum. An Afghan sense of decorum. The key word, of course, is Afghan.

When I landed at Kabul airport, I was the first in the queue at the emigration (immigration? Tourism?) counter. The man did not have a ball pen to sign on my passport, and I gave him one and left it with him: he needed it more than I did.

I asked a man who was hanging around: “Where is Mullah Omar?”

“In Pervez Musharraf’s house in Islamabad,” he said.

We went to a restaurant for lunch and were shocked by the lack of service, sheer rudeness. Finally, it came to a point when I went up to the owner, who was sitting at the cash counter, and asked him what the hell was wrong. “Pakistani, no service,” he told me. “But we are Hindustani,” I told him. His demeanour changed miraculously. “Hindustani!” he said. “Half price, double service!” And he insisted on charging us only half of what was mentioned in the menu.

We went to the football stadium where the Taliban used the goal posts to hang people. The newly-formed Afghan football team was training there. Tata trucks were a crowd. The most common stores in Kabul were drugs and pharma stores: after all, in 20 years of combat, people had lost a lot of arms and legs; the water had been contaminated, contagious diseases were the order of the day. But the second most common stores were photo studios. The Taliban had banned photography for two decades; two entire generations had grown up with no visual record of their childhood. The Taliban were mendacious: a few years ago, The Daily Telegraph revealed how they had their own photos clicked in heroic poses, but for the average Afghan, no pictorial record was allowed; it was against the laid-down faith.

Wherever we went, little children would run up to us and ask to be photographed. But we are going back to India, we told them, you will never see these pictures. They didn’t mind. They simply didn’t mind. The very fact that their photos were being taken, that there would be a record of them somewhere, perhaps in an obscure hard disk in some foreign country, was good enough for them. I have never felt such—I don’t know what (don’t have the words)—for these little happy smiling children.

And then you see a girls’ school session get over. And you see hundreds of young girls running out of school, in total joy and playfulness, enjoying their innocence, and you want to cry. Just a little bit.

And at every open space, every field, every gully, you see boys playing cricket. They are all chucking. All. One of the greatest regrets of my life will always be that I didn’t go up to them and tell them, “Boss, this is not cricket, you have to turn your arm over, like this, like this… watch me. Try. This is how to do it.” On the other hand, who gives a damn? Let them chuck the hell out of their batsmen. They have suffered enough to earn just a simple right.