Rendezvous with ‘a leading Syrian dissident’ 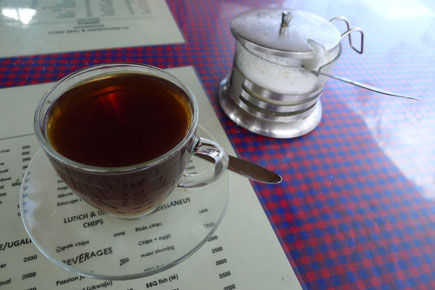 Rendezvous with ‘a leading Syrian dissident’


I am sitting on the shore of an icy lake on the outskirts of an unknown town far in the northern hemisphere. It is a frozen, starless night and I pull up the collar of my heavy coat to protect my sore cheeks as I wait. When he finally arrives, more than an hour late, he is wearing sweat pants, a hooded sweatshirt and running shoes. “Sorry about the casual look,” he says, treating me to a truly dazzling smile. “After our talk I will go for a run. It’s the only thing that can clear my mind, the only way I can get any sleep with this continual jet-lag.” He is warmer than I expected, friendly and relaxed. Earlier, in the company of others, he seemed formal, even stiff. I pull out the thermos I have brought and pour us each a cup of tea, careful to sip mine first in case he has any doubts. (I am not so used to clandestine meetings, John le Carré being my only real point of reference).

My interviewee, NS, is a ‘leading Syrian dissident’ and holds a very senior role in the political ranks of the Syrian revolutionary forces. He was here to make a plea to some highly placed opinion leaders, to intervene, immediately and militarily, to bring a decisive end to Assad’s regime. When I introduced myself, he shook my hand and looked right into my eyes (I felt ancient heat rising… hyssop and olives and figs). He told me he reads the online edition of my newspaper. Daily. I immediately asked for an interview. He immediately agreed. I was thrilled, but was sure he would change his mind if I offered the chance. Much lurking and some stalking ensued. I have been trying desperately to fulfil my commitment to myself never to chase anyone anymore, ever, but surely an interview with a leader of the Syrian revolution for my Israeli paper was worth a broken vow and that sweaty feeling in the nape of my neck.

“The situation is very clear,” he says, now seated close to me, warming his hands on the hot steel cup. “It is not at all complicated. This is not a ‘civil war,’ this is a popular uprising against a murderous, tyrannical regime. Assad will fall,” he says, his gaze intense, “But how high will the price be? Extremism is intensifying daily. Why not finish this once and for all?” NS, in exile for a decade, tells me about the homesickness, his insomnia, his love of ancient texts. “You know, Assad’s snipers target children,” he says without changing tone. “Their bodies pile up. The parents cannot collect their dead kids because when they try to, the snipers take them out as well.” Then he quotes Reverend Desmond Tutu: “Whoever stays neutral in the face of injustice has chosen the side of the oppressor.” “The Syrian people are begging the world,” NS says, “At least, secure the airspace, so they will stop massacring us from the sky.”

Back home from my travels, some more rummaging for facts turns up the detail that NS has worked in organisations heavily funded by US ‘neo-conservatives’, perhaps the State Department as well, long before the revolt started. Despite his claim, nothing about this is simple.

NS promises the new Syria will be democratic, pluralistic, egalitarian, women and minority friendly (“except, of course, for some difficult years of transition”). He tells me of the gentle, peace-loving nature of the Syrian people. He even guarantees that the peace process with Israel is as good as settled, as everyone realises how important this peace will be to put back together all that has been shattered (this was shortly before the recent round of eruptions in the Middle East). “Many of my friends are Jewish,” he assures me as he gets up to leave. His optimism leaves no room for doubt and I am entirely carried away. We grasp each other’s hands with greetings of salaam and shalom, with promises of mutual visits to Jerusalem and Damascus. Only after he takes off on his run around the frozen lake and I am left staring into the lonely darkness, I remember to wonder why, if all this was so, NS refused to speak to me on record, why he insisted I change all details of the meeting rendering him completely unrecognisable. “I know you don’t want to cause me harm, and that you understand the magnitude of the danger you’ll be putting me in if it came out that I spoke to you,” he said, flashing me a grand but opaque smile.